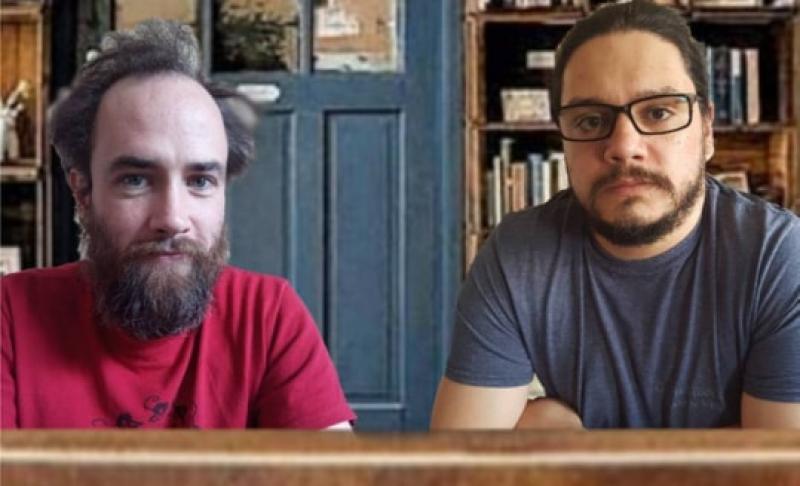 A budding Derry film director seeking funding for his first major production says Derry is being under utilised as a location for movie industry.

Aaron O’Neill who with his writing partner Simon Russell, has scripted a darkly comic feature based on the cross border smuggling trade, has already filmed a scene from the piece but now requires the finance to bring the entire production to the big screen.

Having sold up his business to pursue a career in filmmaking and having qualified in moving image production, Aaron has since worked as an actor, cameraman, sound recordist and locations assistant. He has also enlisted former Derry boxer and now actor John to play one of the film’s main protagonists.

“I wrote a lot of short stories as a child and I wrote my first script at 12. As a teenager I was encouraged to go into business as there was no film industry here. So, I owned a video store for 12 years and I watched every film under the sun.

“I have worked on some movies and I saw the standard of films that have attracted funding and thought, the time is right now and I can do better than that,” Aaron said.

Then, a chance meeting with Simon Russell whilst the pair worked as extras on Game of Thrones made up their minds much bigger opportunities lay ahead.

“I realised he was a kindred spirit and a very talented writer. We completed a novel and a lot of short stories and then we decided it was time to write our first feature. The next eight months were spent on full time writing and rewriting ideas and stories before we hit on the concept for a project called ‘Butter 77’. We incorporated ourselves under the name ‘O Reel Productions’ and pushed on with the idea for a film,” Aaron continued.

With all eyes on Brexit and its focus on the border issue, O’Neill and Russell drew up a story that acts a warning to young people not to return to the life experienced by previous generations here.

The story is this. It’s 1977 and Tommy McConnor is a master smuggler, chiefly of butter. The character is just 22 and is determined to preserve his youth by having fun with his family and friends.

However, Tommy’s uncle Micky is a senior member of the IRA under pressure from his paramilitary masters to encourage his nephew to use his skills to smuggle something more than dairy products across the border.

Tommy and his parents Donnal and Brenda run a family food shop and the smuggling exploits has helped the business thrive as well as providing cheaper goods to the local community. But, Micky’s IRA involvement which previously led to Tommy’s father spending six years in prison, presents a significant obstacle to the plan to smuggle a shipment of plastic explosives wrapped in butter packets from Donegal into Derry.

But, the IRA man preys on both Tommy’s father and another of his sons to pressurise the arch smuggler to go ahead with the plan claiming this one last ‘job’ will see the McConnor family free of paramilitary pressure once and for all.

All the while, Tommy McConnor is planning to get out of the North and head with his girlfriend to New York. There are several more intriguing plot lines with many twists before the story reaches its dramatic conclusion.

Aaron O’Neill said: “Having lived in Derry, I knew that the people here had a trait of being able to laugh in the face of adversity. That for me decided the tone of the film.

“It’s a serious subject, but it’s told through the eyes of youth who refused to let dramatic events ruin their laughter.

“We also chose a darkly comedic tone to open up the market beyond the Irish history enthusiasts. As it’s our first feature we wrote it in a classic Hollywood structure because we were very mindful about keeping the audience as wide as possible.

“But, while we’ve kept to a classical narrative structure, we’ve put our unique voice into it. The lighter tones help to differentiate it from the ‘typical Troubles’ movie. We know that if we can make it the way it appears our minds eye we can attract an international audience and have a very good chance of being that one in every twenty films that makes a great profit.

“We know that in order get funded they usually look for a scene already filmed, so we went ahead and did that. We have no budget so we chose a scene that is one of the more dramatic ones in the film.

“If we’d had money, we would have filmed the opening scene. But, the scene we did over a weekend, I think showcases the project well and has been very well received and was watched one thousand times in just three days on YouTube.

“We have ex-boxer John Duddy, now of course an actor lined up to play the character of Micky. We want to find funding to make this film in the way it deserves to be told, but one way or another, it will be made.”

The prospective filmmaker is also dedicated to making Derry a permanent part of the industry’s landscape.

“Being from Derry and working in film and TV, it can get frustrating because you’re going to have to travel to Belfast or Dublin for work.

“I know, because I grew up here that we have world-class locations on our doorstep. We have the city, the townlands and the beautiful Sperrins. We’re so close to Donegal too with miles of unspoilt beaches.

“Talent wise, it’s no secret that Derry is a creative force on its own with amazing actors, musicians, artists-the list is endless. I’m saying this because ‘O Reel Productions’ long-term goal is to show the film world what we have to offer.

“Once the film industry falls for a location it’s proven that to transform the economy for the better and provides employment directly with cast and crew and indirectly through tourism.

“We feel that it’s time for Derry to shine on the world stage and that’s our macro mission.”