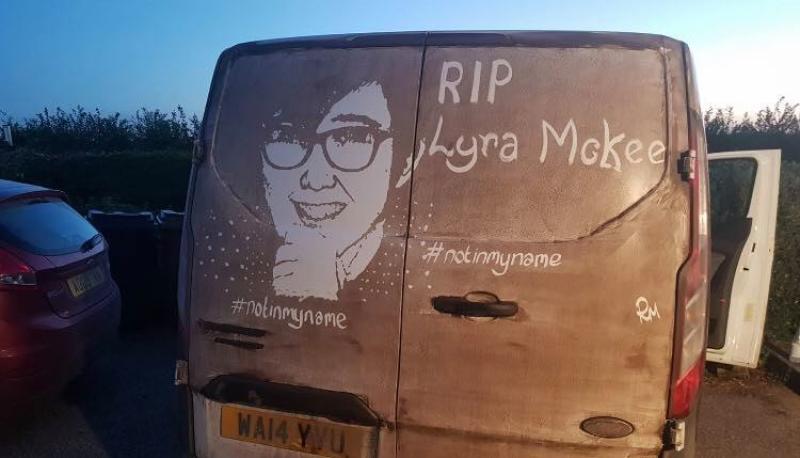 An English artist has told the Derry News why he chose to pay a unique tribute to murdered journalist, Lyra McKee, with his own special brand of art. Rick Minns (44), from Norfolk, who prefers to be called 'Ruddy' and whose enterprise goes by the name of Ruddy Muddy Art, creates his quirky works of art on unwashed white vans, with stunning results. He was speaking ahead of two memorial events to be held in Derry tonight. Ruddy was moved to pay tribute to the 29- years-old last month when he heard the news of her senseless murder. Ms McKee was shot dead on 18 April last by a masked New IRA gunman as she reported on ongoing riots in the Creggan area. Ruddy's tribute has been recognised by the late Ms McKee’s partner, Sara Canning, who was extremely touched by his homage to the woman who was to become her wife. Speaking to Derry News yesterday, Ruddy said: “It was so sad but I didn't realise just how sad until I heard more about Lyra on Jeremy Vine. That is when I knew I had to do something. I never expected it would lead to talking to Sara but it was so emotional. Just doing the pic was tearful but the reaction was very touching.

“I am not sure I will ever understand. We are all humans and a mutual respect is what we should all strive and hope for.”

When Ruddy first posted the piece on Facebook the week after Ms McKee’s murder, he said: “I know I have other pieces but had to do this one after hearing all about Lyra McKee on the the Jeremy Vine Show. Was crying for the whole piece. What an amazing woman.” Ruddy then asked on the Facebook post what words he should add to artwork and the most requested response was #notinmyname. Ms Canning saw and appreciated the artwork and thanked Ruddy for featuring Ms McKee. In a Facebook exchange, she wrote: “Fantastic. So powerful... she’d be so embarrassed but secretly massively pleased. It’s beautiful, like her.” Ruddy replied: “Thank you so much. All of my thoughts are with you. I wish I had known about Lyra sooner. It hasn't until I heard more on Radio 2 that I found out just how amazing she was.” The poignant exchange continued with Ms Canning saying: “Thank you so much. This is a gorgeous piece of art and it captures the beauty and the light of my Lyra.” To which Ruddy replied: “My absolute pleasure. You must have been such an amazing partnership. The words I have heard have been so swollen with love.” Meanwhile, Derry will remember the talented journalist a month after she was shot dead on the streets of Creggan as her friends and family vow they "won’t let her memory and name dissolve." A Month’s Mind Mass will be held tonight in St Mary’s Chapel, Creggan, at 7.30pm celebrated by Fr Joseph Gormley, the priest who gave the 29- year-old the Last Rites on the night she was shot dead. It will be followed by "Love for Lyra," a gathering at the Peace Flame at 8.30pm, in the Peace Garden adjacent to the Guildhall. Kathleen Bradley, a close friend of Ms McKee, said the Mass and public event would allow people to honour and remember her friend in an inclusive, religious and non-religious way. “We arranged a Month’s Mind Mass and the Love for Lyra event because it’s all still a shock to us and we know that it’s still a shock to the wider public,” she said. “Everyone is still grieving for Lyra, even people that didn’t know her ,and we are very conscious of others needing some kind of outlet to show that grief and support for Sara and Lyra’s family. So, we decided to have the Mass and a non-religious event.” Ms Bradley said that another reason for organising public events was to keep the profile of what happened to her dear friend a priority so that her murderer will be brought to justice. “It’s been a month and, while it is great that there have been arrests, Lyra’s murderer still hasn’t been arrested,” she said. "We won’t let what happened to Lyra die out; she’s too important and we won’t let her memory and name dissolve."
ADVERTISEMENT - CONTINUE READING BELOW