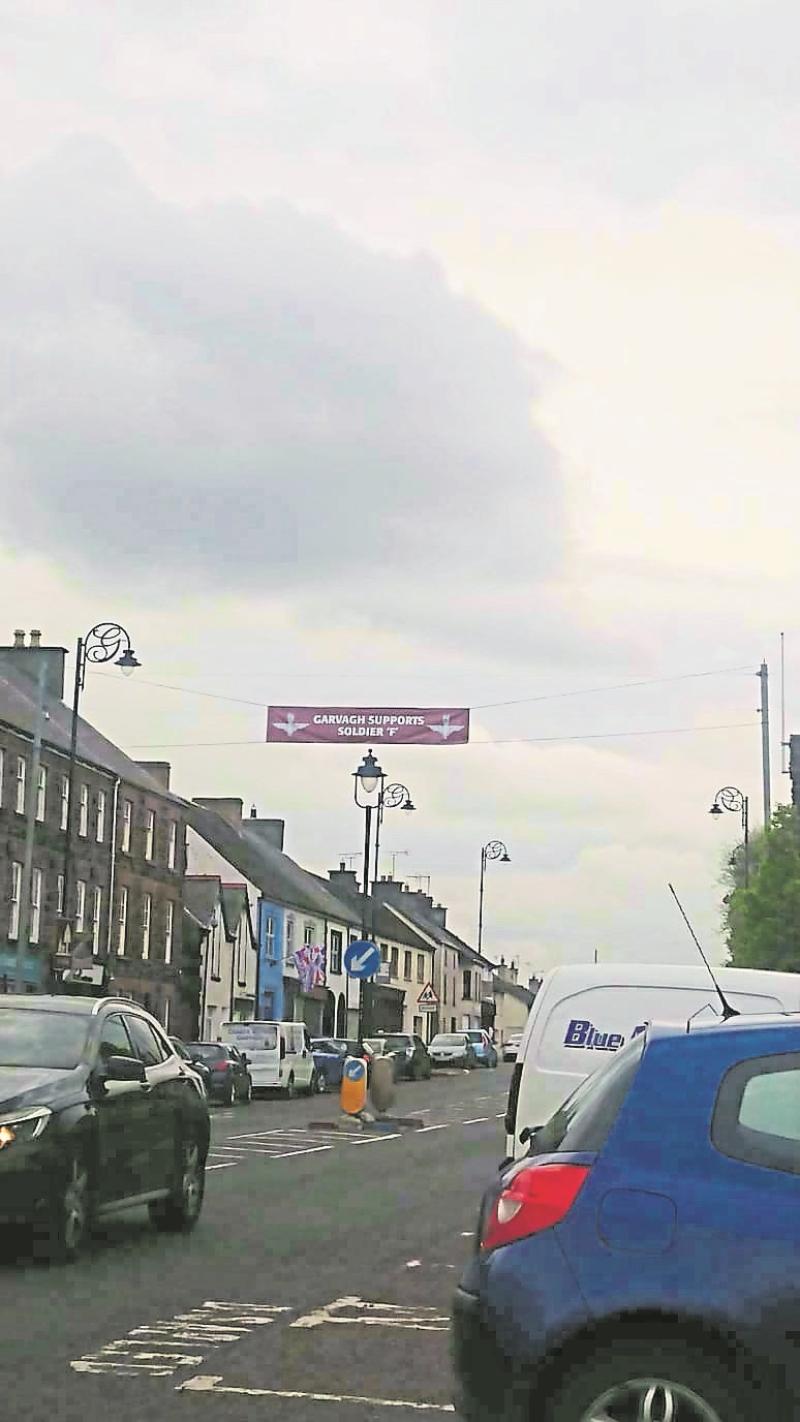 The family of a man shot dead on Bloody Sunday have instructed their lawyers to write to the Department of Infrastructure (DfI) on the issue of banners erected in various parts of the North in support of a soldier who will be charged with his murder. And, Madden & Finucane have said that they will take court action if the banners are being flown in an unlawful manner. On March 14 the Public Prosecution Service (PPS) announced that a man referred to only so far as Soldier F will be charged with two counts of murder in relation to Bloody Sunday as well as four counts of attempted murder. Seventy days after that announcement however, no charges have been preferred by the PPS against Soldier F in relation to the deaths of William McKinney, James Wray or the attempted murder of Patrick O’Donnell, Joseph Friel, Joe Mahon or Michael Quinn. In the interim period a series of banners against the coming prosecution of the ex-Paratrooper are being flown from lampposts located at four venues in the North; Church Street in Portadown; close the entrance of Carrickfergus Castle; Ballymacash in Lisburn and on the Main Street at Garvagh in Co Derry. Several Parachute Regiment flags have also appeared in recent days at Nelson Drive in Derry. However, the family of William McKinney have now instructed law firm Madden & Finucane to write to the Department of Infrastructure (DfI) who have responsibility for ensuring that public property such as lighting is not misused. Solicitor for Madden & Finucane, Fearghal Shiels said: “We have been instructed by Willie’s family to challenge the continuing erection of banners which on the information currently available to us appears to be unlawful. “We have corresponded with the DfI and also with the PSNI requesting details of the steps that both agencies shall take to ensure that these banners be removed. We will not hesitate to take the appropriate court proceedings if required to do so.” In the letter to the DfI, lawyer for Madden & Finucane Fearghal Shiels states: “It is a matter of great concern that our clients that banners in support of Soldier F, who is yet tom appear in court or be formally charged, have been erected and are being flown from lampposts at various locations.” Mr Shiels also refers the DfI to a section of the The Roads (Northern Ireland) Order 1993 which states that it is an offence punishable by a summary conviction for any person to place anything on an “overhead beam, rail, arch, pipe, cable or wire or any similar apparatus over, along or across any road.” The lawyer also wrote: “In the circumstances we should be grateful if you would confirm that the grounds upon which each of the aforementioned banners have been erected are owned by the local authority and are not private grounds. “In the event that the grounds are owned by the local authority and the banners have been erected without the requisite permission, please confirm by return what steps the Department intends to take in order to secure the immediate removal of these banners, which are clearly inappropriate and an attempt to interfere with the administration of justice. “Please also confirm what steps the Department intends to take to prosecute those responsible for erecting the banners, if in fact the banners were erected without the requisite permission.” Michael McKinney, the brother of Bloody Sunday victim William McKinney said: “As a family who are directly affected by the prosecution of Soldier F for the murder of our brother Willie, we are extremely concerned that banners have been erected pledging support for Soldier F before he has even appeared in court. “We see this as an orchestrated and determined campaign by people who either have no idea of the extent of Soldier F’s actions on Bloody Sunday, or by people who are simply indifferent to them to interfere with the administration of justice. “This is the continuation of failed political efforts to try and prevent soldiers being prosecuted and it should not be allowed to continue. “It is sadly ironic that these banners are appearing in working class unionist areas, where the same battalion of the Parachute Regiment murdered two unarmed Protestants on the Shankill Road only months after Bloody Sunday.” A spokesperson for DfI told the Derry News: “The Department can confirm that correspondence has been received regarding the flying of banners. We are currently considering the issues raised and will respond in due course.” CAPTION: A banner in support of Soldier F on Main Street in Garvagh, Co derry.
ADVERTISEMENT - CONTINUE READING BELOW