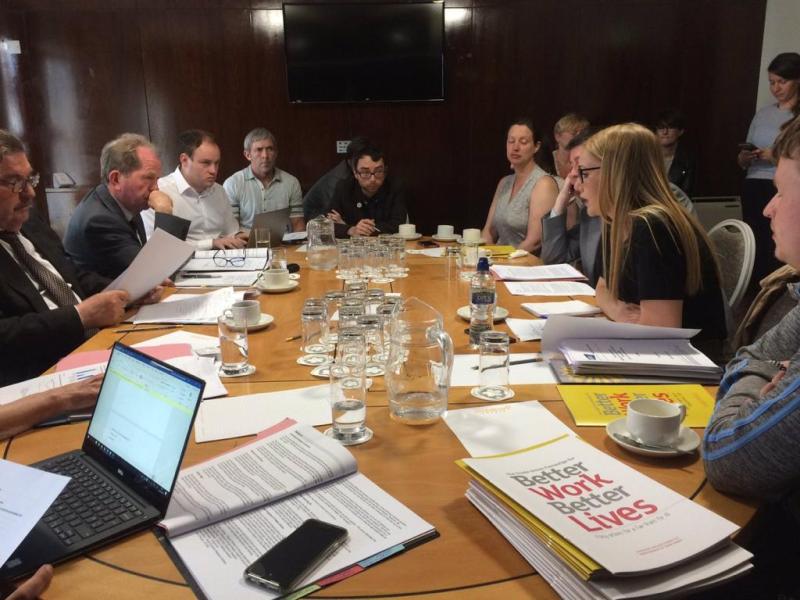 Businesses within the tourism and service industries in Derry have been strongly criticised for paying staff “poverty wages” despite a recent upsurge in visitors. The comments were made by the Derry Trades Union Council (DTUC) which met with delegates from the Aegis union and representatives from the Low Pay Commission (LPC) in the city. The DTUC has called on the local tourism and services sector to justify its low pay policy which is forcing families to foodbanks and leaving greater numbers in poverty. Last year leading accountancy firm, ASM Chartered Accountants, published a bellwether report on the tourism industry in NI which described Derry as the “star of the show”. It said the city had turned a corner through growing occupancy rates which brought about improved profitability of 19.7% in 2017 compared to 12.4% in 2016. With that increase in demand came a very substantial improvement in room rates which increased by 15.7% year on year to an overall average of £67.15. A record number of cruise ships are also set to dock in the city this year, according to Visit Derry. Commenting after the meeting on the need to hold large employers to account, Aegis Divisional Secretary, Gareth Moore, said: "We welcome the visit from the LPC and the opportunity to highlight the damage that poverty wages has on workers, their families and their communities. “In the current economic situation where record levels of employment coincide with record levels of foodbank use and workers in poverty, there is a necessity for wages to be increased to a real living wage. “We cannot accept the current situation where full-time workers are struggling to survive from month to month, falling further into debt and relying on foodbanks to get by. “Aegis, along with our comrade in the DTUC, will be very active this year in challenging large employers who refuse to pay a real living wage to their staff while those at the top live lavish lifestyles.” 'Exploitation' The Low Pay Commission is an independent body that advises the government about the National Living Wage and the National Minimum Wage. Niall McCarroll of Unison and Chairperson of Derry Trades Union Council (DTUC) has thrown down the gauntlet to local businesses to end exploitation and urged them to pay workers a living wage. He said: “DTUC officers along with our colleagues from UNISON Community Branch, Foyle Health Branch, Derry Education and Aegis collectively provided a voice for local workers when we met the Low Pay Commission in Derry. “DTUC used the opportunity to impress upon the LPC the precarious and unstable nature of employment across the City and District and how the scourge of low pay leaves workers and their families struggling to have any decent standards of living. “These demoralising standards of living are no more prevalent than within the local tourism and service industry where basic minimum wage and zero hour contacts are used by commerce groups and employers to maximise profits at the expense of local people.” Mr McCarroll continued: “How can this be justified when local hotels are regularly at full capacity and restaurants and cafes also busy and yet poverty pay is the dish of the day. “The LPC assured DTUC that they would report back to government, presenting their findings which included the call from DTUC for a minimum living wage of £10 an hour for all workers, no matter what their age. “DTUC are committed to building on our campaign to stand in solidarity with local workers, whilst exposing bad employers and we will be engaging with all newly elected DCSDC councillors to end the exploitation of local workers.” 'Damaging' The Northern Ireland Hotels Federation (NIHF) is the representative body for the hotel sector. NIHF Chief Executive, Janice Gault, described accusations of low pay as "very damaging" to an industry which has "done much to improve its image". She said: "Our members are subject to the same legal and employment framework as other sectors. Hotels currently have a wage content of around 35% of turnover. "The sector has a variety of roles from entry level at the appropriate national minimum wage level of the candidate through to supervisory, management and executive roles. "The Federation has not seen the evidence that the LPC received last week and therefore is not in a position to answer the specifics. Nor have the NIHF been made aware of working conditions contra to current national minimum wage levels by any trade union official or employee in the Derry-Londonderry area." Ms Gault added: "Allegations of this nature are very damaging and without having specific examples are impossible to abate. "As an industry we have done much to improve our image: improving working hours, providing strong and well rewarded career paths and supporting qualifications that give employees the opportunity to have greater skills to work globally." Photo: Niall McCarroll, chairman of the Derry Trades Union Council, and members of Aegis in meeting with the Low Pay Commission.
ADVERTISEMENT - CONTINUE READING BELOW