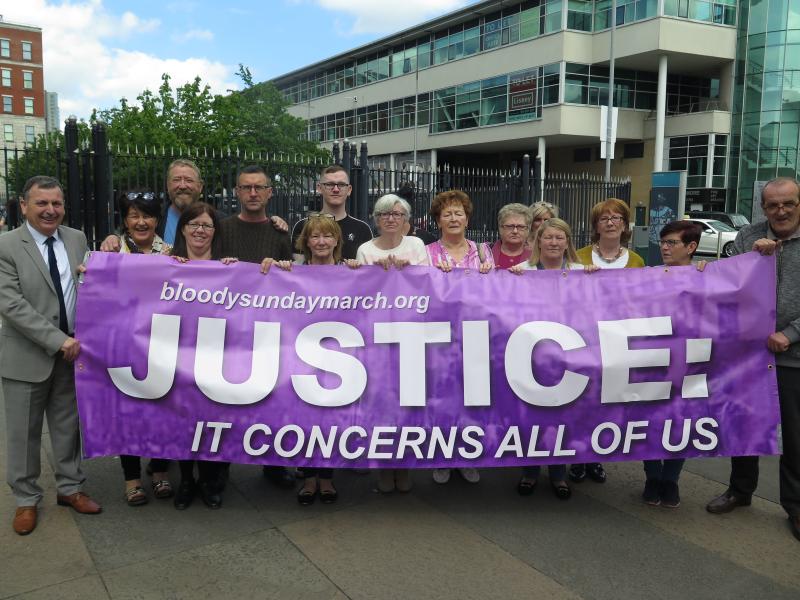 Members of the Bloody Sunday March Committee (BSMC) last week attended the Ballymurphy Inquest to show solidarity with the families of the victims of the 1971 atrocity. Several members of the BSMC travelled to Laganside Court on Thursday past to attend the proceedings which are re-examining the circumstances in which 10 people were gunned down by members of the Parachute Regiment in the West Belfast housing estate around five months before the same British Army regiment shot dead 13 people on Bloody Sunday. BSMC member Betty Doherty said: “Given our own experiences of the Bloody Sunday Inquiry here in Derry and the stress and strain we know the Ballymurphy families are currently under, we felt it was important for us to show our support by travelling to Belfast and standing to shoulder with them.” The killings in Ballymurphy took place between August 9-11, 1971 as the British Government introduced their internment policy which they officially called Operation Demetrius. The Inquest has already sat for over 60 days and has heard testimony from more than 100 witnesses, both civilian and military. Betty Doherty added: “Just like the relatives of all those murdered by the Paras here in Derry, the Ballymurphy families have had to struggle long and hard to get to this point in their campaign and we fell this small act of solidarity lets them know that the people of Derry stand with them. “Now that the Inquest is moving towards its conclusion and the expectations of the families and the pressure is heightened on them we would ask people in Derry to travel with us next Thursday, May 30 th and show their support for them in their call for truth and justice.”
ADVERTISEMENT - CONTINUE READING BELOW