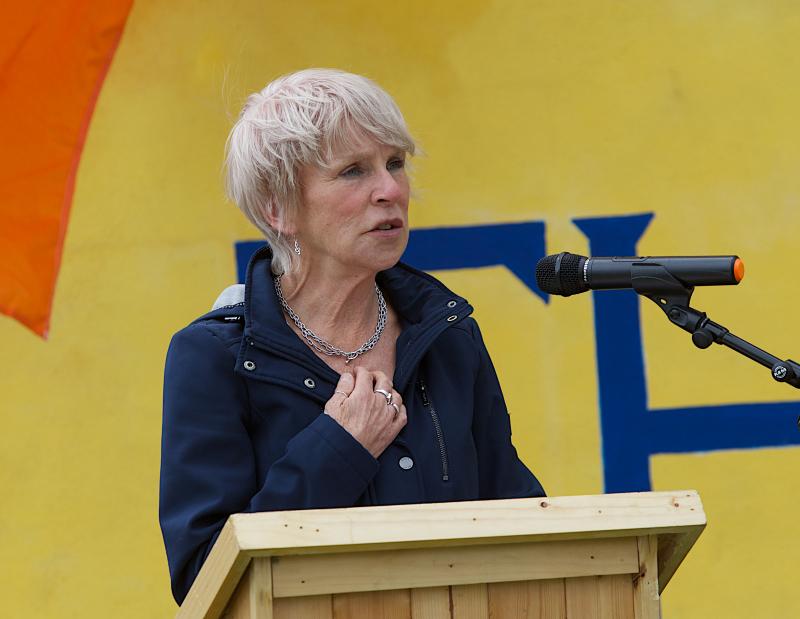 Newly elected Derry councillor Anne McCloskey yesterday blasted NI politicians for showing a lack of leadership as she spoke at a public commemoration for IRA man George McBrearty. During her speech she criticised the Good Friday Agreement (GFA) and said the people of Derry deserve real leadership to address enduring inequalities - “not the shower of gobshites that are ruling it at the moment, and I’m talking about both sides.” A few hundred people attended the independent commemoration which marked the 38th anniversary of the SAS killing of Derry IRA man George McBrearty. On May 28, 1981 during the republican hunger strike of that year, George McBrearty and Charles Maguire approached a car on the city’s Lone Moor Road. The car was driven by an undercover member of the British Army who killed both men. Yesterday’s commemoration was chaired by Martin Galvin, the New York based lawyer and former publicity officer for NORAID, who invited members of the McBrearty family to lay wreaths at the front of a mural which stands in his honour at the junction of Rathkeele Way and Rathlin Drive. Various Republican groups were then invited forward to lay flowers of their own, including representatives from Saoradh, which has faced recent criticism for its response to the killing of journalist Lyra McKee, the 32-county Sovereignty Movement, “friends and comrades from Donegal and Glasgow” and others. Long-standing Shantallow GP Dr. Anne McCloskey, who represents Peadar Tóibín’s pro-life all-island republican party Aontú, retired from her practice prior to the council elections earlier this month. Cllr McCloskey, a former member of Sinn Féin, was introduced as the main speaker yesterday. She spoke of her great privilege in addressing the McBrearty family and friends and to honour two men who “gave their young lives for the cause of Irish freedom and unity.” “It’s an event which attests that to those who loved them our volunteers will never be forgotten,” she said. 'Bewildered' The Derry City and Strabane District Councillor also said she’s “bewildered” by what has become of the Republican movement she knew. Cllr McCloskey questioned whether the “ultimate sacrifice” made by George McBrearty and others has brought about change 38 years on. She contended that the country hasn’t moved much further on and is “very probably on the wrong road to God knows where.” “In Derry, employment, housing stress, poverty, ill-health, emigration, and the gap between the ‘haves’ and ‘have nots’ is similar to pre-civil rights times. “We still have for example 60% child poverty in the community I work in in Shantallow and children who are being failed by a still selective education system where at 11 years they are selected as being passes or failures. “We have children addicted to drugs, porn, gambling before they leave school. This state doesn’t cherish all the children of the nation (a reference to the 1916 Proclamation).” She was critical of the GFA saying it was never presented to Republicans to be defended. “It was a stop-gap to national sovereignty to be replaced by better within a very short time frame. “In truth it was acknowledged for what it was, it was a strategic defeat, but one that need not spell the end of our hopes of unity and peace. “We would fight on we were assured, only this time the spearhead would be politics. And it’s good that families in the years since the ceasefires haven’t had to endure what the McBrearty’s have suffered. “Children don’t have to miss school to go visit jails, mothers don’t have to bury their children. “As my father said, you don’t have to fight Mohammed Ali with boxing gloves but you have to fight British imperialism with something.” 'Discrimination' Cllr McCloskey went on to add that the GFA asserts the legitimacy of British rule in Northern Ireland. As a person who opposed it at the time, she explained, that while it is a political reality that there was no way of altering it, “it never meant we were instead to end up defending it.” “It’s something we must overcome not celebrate. Too many erstwhile Republicans are a bit too comfortable in the house on the hill, while people like the McBreartys’ and thousands of others across this country, wonder what happened to the unfinished revolution.” "Sectarianism is worse than ever, prods are still unionists and taigs are still nationalists it’s just that they no longer particularly go to chapel,” she said. “Ongoing endemic discrimination still puts Derry at the top of every index of deprivation. We still have no university, we’re the only city of this size in Europe that still doesn’t have a standalone university. “It’s important to remember the past but there is enormous work to be done to get our country back again,” Cllr McCloskey concluded.
ADVERTISEMENT - CONTINUE READING BELOW