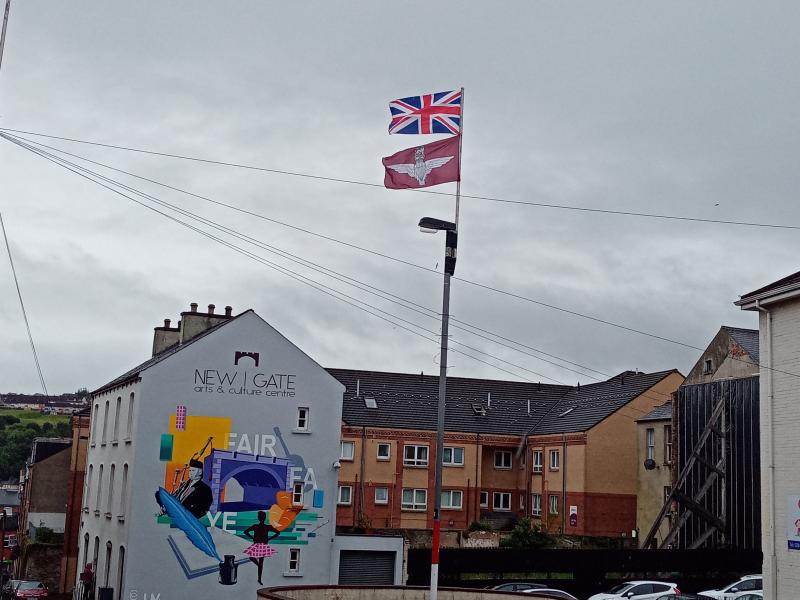 Bloody Sunday families have been left “sickened” by the erection of a parachute regiment flag in The Fountain area of Derry. Mickey McKinney whose brother Willie was shot dead on Bloody Sunday became aware of the flags in The Fountain last week while doing his job as a taxi driver. He said: “There were banners that went up around Carrickfergus, Portadown and the Shankill over the last couple of weeks. Our solicitor has done something about that, letters have gone off to the department of infrastructure. “I’m a taxi driver and I seen the Para flags in the Fountain this week. I was under the impression it might have been there for a while but it’s the first time I seen it. “What do you say about it, what’s wrong with these people, they know what the Parachute did here in Derry. “It’s really sickening, I think these people just want to rub our noses in it, they’re completely insensitive to what’s happened, they’re totally insensitive to the feelings of the families, they really don’t care about the feelings of the families and all they’re doing is adding insult to injury. “The people who are putting these flags up should be aware that the same regiment are responsible for the murder of two Protestants in the Shankill in 1972.” The McKinney family recently instructed their lawyers to write to the Department for Infrastructure (DfI) on the issue of banners put up in various parts of the North in support of a soldier who will be charged with his murder. Madden & Finucane have since said that they will take court action if the banners are being flown in an unlawful manner. Meanwhile, Sinn Féin MP Elisha McCallion has called on The Fountain community to remove parachute regiment flags. She said residents need to listen to the appeals of Bloody Sunday families to remove the flags. The Foyle MP added: “Parachute Regiment flags have been erected in the Fountain estate area of Derry in recent days. “This has led to offence and anger among the families of those killed on Bloody Sunday. “The Bloody Sunday families have appealed to the community in the Fountain to remove these flags. “I would echo that call from the families and appeal to people in the area to ensure these flags are taken down.” On March 14 the Public Prosecution Service (PPS) announced that a man referred to only so far as Soldier F will be charged with two counts of murder in relation to Bloody Sunday as well as four counts of attempted murder. Seventy days after that announcement however, no charges have been preferred by the PPS against Soldier F in relation to the deaths of William McKinney, James Wray or the attempted murder of Patrick O’Donnell, Joseph Friel, Joe Mahon or Michael Quinn. In the interim period a series of banners against the coming prosecution of the ex-Paratrooper are being flown from lampposts located at four venues in the North; Church Street in Portadown; close the entrance of Carrickfergus Castle; Ballymacash in Lisburn and on the Main Street at Garvagh in Co Derry.
ADVERTISEMENT - CONTINUE READING BELOW