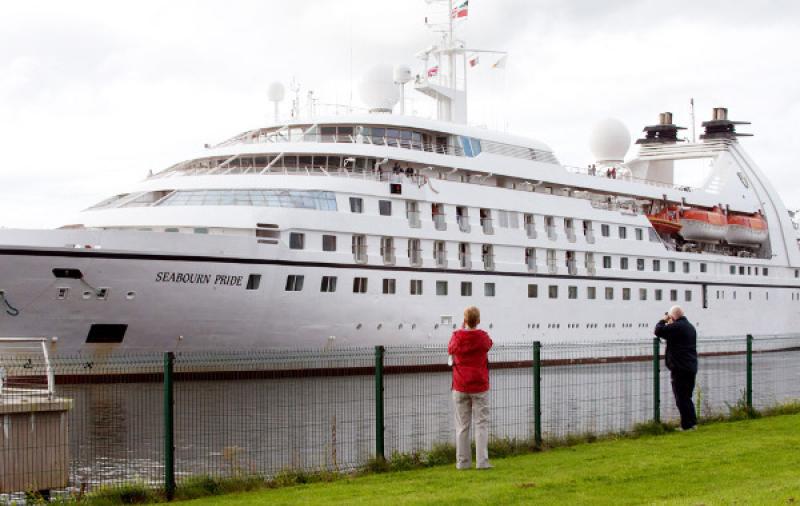 The head of Foyle Port yesterday stressed the need for infrastructural improvements in Derry and wider North West to allow the tourism industry to thrive. The terminal will be located less than an hour from Derry and will have the capability to safely berth the world's largest cruise vessels. Speaking at an inquiry into tourism in Northern Ireland at Westminster, Brian McGrath, Chief Executive of Foyle Port, believes a deep-water cruise ship terminal at Greencastle could open up the region to thousands more visitors each year. Plans are at an "advanced stage" and it is his view that once delivered this investment will increase visitors from 10,000 to 100,000 a year. He commented: “Connectivity in its broadest form is something we have to develop. Northern Ireland is a small area and cruise companies tend to look at trips that would take them an hour from base. “What we have seen is that Titanic particularly attracts a tremendous number of cruising passengers. The industry is very joined up in this respect, it was actually in Derry where the first cruise ships came in to Northern Ireland, ironically it wasn’t Belfast at all in the 1990s.” The growth of the industry brought with it ships that are too big for the infrastructure in the North West to handle which is why Belfast has made such significant strides forward over recent years while the number of cruise ships visiting Derry has remained relatively static. This year Belfast is anticipating around 150 cruise ships containing 280,000 passengers while Derry will welcome 17, or around 10,000 people. Mr McGrath explained: “The reason we’re doing so few is because the infrastructure is just not in place to safely disembark those passengers. “To remedy that the harbour commissioners have plans to develop a deep-water cruise terminal in Greencastle, which is in Donegal, but sits within the jurisdiction of the Londonderry Port and Harbour Commissioners. “Because whilst the Harbour Commissioners were developed in 1854 and predate partition, Lough Foyle in its entirety is under control of the Londonderry commissioners, recognised by both the British and Irish governments in terms of that navigability and operations of trade. “We are a unique enterprise in terms of being both a United Kingdom trust port operating in Europe at the same time so that gives us a tremendous opportunity to do something in the North West. “Those plans are well advanced and we’re looking at the ownership and operational model of those that would bring somewhere in the region of 100,000 passengers into the NW. “And the significance of that in itself is that Lough Foyle is the physical entity that links the Wild Atlantic Way, the Causeway Coast and Glens and also the historic walled city of Derry-Londonderry.” The new terminal will be a means to naturally bring in significant numbers of people to visit sites of global geological importance such as Giant’s Causeway and take in Derry’s own iconic City Walls. “That is how we’re looking to address it, 400 cruise ships in Ireland last year, Cork, Dublin, Belfast all doing around 150 ships and the physical deficit on the island of Ireland and in Northern Ireland sits within the North West and in Derry-Londonderry, so we need to address that, we have made significant inroads and I think we can move that forward. “Brexit is not helping in that respect, in terms of our linkages in dealing with Donegal County Council and our stakeholders across the border but we’re optimistic that we can overcome those. That is a very practical way to open up our product in Northern Ireland in a very significant way,” Mr McGrath concluded.
ADVERTISEMENT - CONTINUE READING BELOW