Youth With A Mission BorderWalk will end in Derry tomorrow night 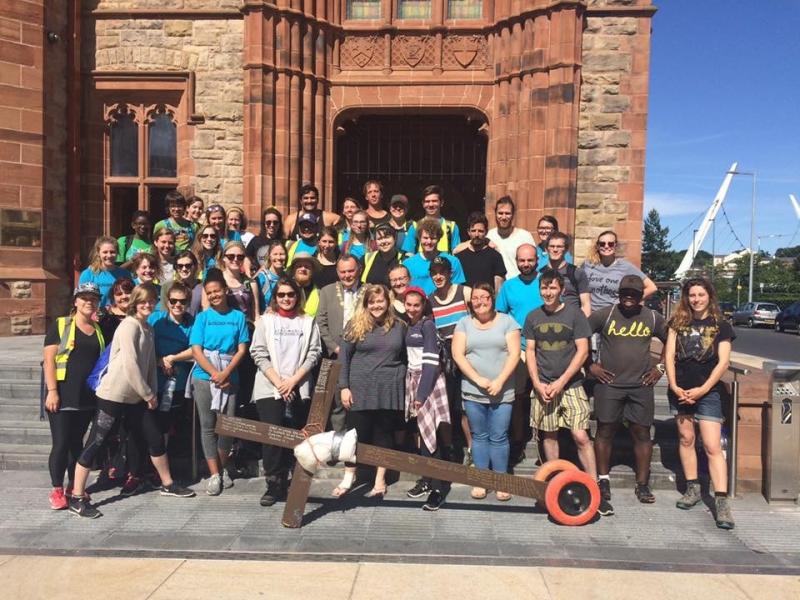 A two-hundred-mile long pilgrimage will end in Derry’s Guildhall Square tomorrow night with an event centred on prayer and music. Over the last two-and-a-half weeks more than 30 walkers from Youth With A Mission (YWAM) have been conducting their seventh annual pilgrimage. Beginning at their base in Rosstrevor, Co Down the cross-community youth group have traversed Northern Ireland’s borderlands and will be welcomed into Derry by the Mayor Michaela Boyle and local people. Since 2013, YWAM walkers have walked along routes connecting border communities, each night hosting community building and prayer events. This year’s BorderWalk started on June 1. The organisation is a faith-based community of people who have been working across Ireland in various ways since the 1970s. Jonny Clark, Ireland Director of YWAM recalled a conversation with a community leader in south Armagh on the first year of the walk. “He asked me if our feet hurt. I said, of course they did as we had just walked fifty miles to get to his community centre. He said he was glad and that he’d been praying that they’d hurt, so the walkers would know something of the pain felt by residents in his community. “The legacy of the Troublers lingers on and this walk is an opportunity to witness to what it can look like when people from different sides of our community and different nations walk with one another and share life together.” The group are urging people from all parts of the political spectrum to gather in Derry city centre tomorrow evening and have said that gatherings such as these are even more important amidst the “unprecedented anxiety over Brexit, the Irish border and the tragic shooting of Lyra McKee. “The experience of the BorderWalk also allows participants to connect in a real way to people and places surrounding current issues.” One YWAM walker from 2018 added: “It’s one thing to read about the issues of Brexit and the Irish border and the legacy of the Troubles, but to actually walk along this land and to connect with its’ communities and people allowed me to both better understand this situation and also to care more deeply about the people on both sides who continue to heal from the past and face current uncertainty. “They aren’t just names in a book or an article anymore. I’ve been there, I’ve met them.” Tomorrow night’s event at Guildhall Square will also see prayers offered for the current political situation here. Mayor of Derry City and Strabane District Council, Michaela Boyle told the Derry News: “I will be delighted to be welcoming Youth With A Mission to the city following their 200 mile walk. And, I’d also like to congratulate all of the walkers on this fantastic achievement. “Indeed, Youth With A Mission, must be commended for being champions of a peaceful future and for a vision and determination to unite people across borders and cultures.” CAPTION: Members of Youth With A Mission members arriving pictured in Derry in 2017.
ADVERTISEMENT - CONTINUE READING BELOW