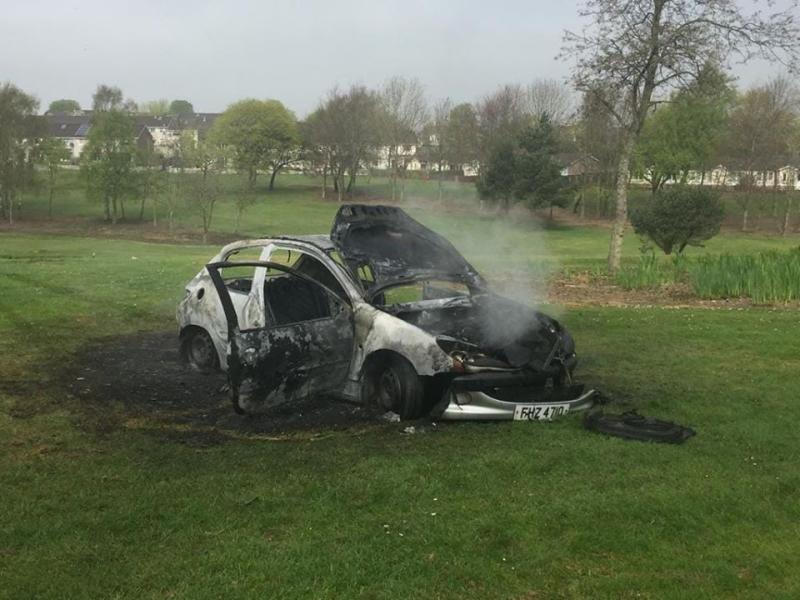 Additional resources have been allocated to community policing in Derry following a recent upsurge in “death driving and anti-community activity”, the PSNI asserted at the weekend. Assurances come following the tragic death of 18-year-old Caoimhin Cassidy who lost his life while driving a stolen vehicle on June 1. Since then police have come under pressure to deal with car crime and “death driving” in the city. Sinn Féin Councillor and Chair of Derry and Strabane Policing and Community Safety Partnership Sandra Duffy attended a meeting with the PSNI where she raised concerns about recent anti-community activity in the city, with a focus on the Galliagh and Ballyarnett areas. Police are still appealing for information particularly in relation to two males who were seen running away from the burning vehicle on Fairview Road in Galliagh. Incidents such as this, involving stolen vehicles are not isolated, and Cllr Duffy said they have increased across the city in recent weeks. She believes urgent action is needed to ensure there is no recurrence of these events. Top of the agenda at Cllr Duffy’s meeting with the PSNI on June 12 was the increase in death driving. “Unless this is tackled robustly I have no doubt that we will be looking at further fatalities in the future and most probably of innocent residents. We cannot be complacent in our opposition to this activity," she said. Communication A stream of social media posts has led to a constant sense of foreboding in communities in her view, therefore, the PSNI was asked to communicate clearly to alleviate some of that tension. “We asked that if they are arresting people, if they are involved in operations, if they are seizing cars, that information is put out there and people can clearly see that the police are doing a job in our neighbourhood. “And it’s not that they are sitting back not doing anything, maybe there are incidents when they are sitting back but are coming in later to gather information. People need to know that there is neighbourhood policing going on in our areas and they shouldn’t feel that fear of crime.” The selling of cars in online raffles for as little as £20 which are bought and driven recklessly by ‘death drivers’ is compounding the problem. Irresponsible sellers must be held to account, Cllr Duffy’s said, and that matter was brought to the attention of police for consideration. “We had a good conversation around car thefts, figures aren’t huge but it is still an issue, so we’ve asked police to put an operation in place, particularly around the Shantallow and Galliagh area because we recognise that the proximity of the Skeoge Road to the border means it can be used as a racetrack.” She added: “We’re not asking the police to get involved in chases along that road that would put lives at risk but we’re asking them to police the roads properly by putting an operation in place with the Gardai. “The Donegal Rally is coming up so they are already in conversation about cross-border operations because they’re aware those roads are used as a racetrack and as escape routes. We will be following up to see the outcome of these operations and we want to see better communication so the public is informed to alleviate this fear that there is lawlessness in the community.” Police visibility on the ground in areas such as Creggan and the Bogside has faced scrutiny. Independent Councillor Gary Donnelly criticised their response to a weekend of ‘mayhem’ in Creggan on June 8 and 9 involving joyriding and street fights. In the Galliagh area that is ‘not an issue’ as police can be regularly seen patrolling on bicycles, according to Cllr Duffy. “One of the good things coming out of the meeting is that there will be an increase in resources, particularly around our neighbourhood teams, which we welcome. The neighbourhood teams have performed so well in our areas particularly around Galliagh and the Outer North area of Shantallow. “They know our young people, our neighbourhoods and the people living in them, so we welcome the fact that there will be an increase in neighbourhood teams and they will have more resources to work better throughout the week. We might not see it until Autumn but we welcome those plans because when we ring neighbourhood teams we know we’ll get a proper response from teams who know our area rather than the response team who deal with matters city wide,” she added. Additional resources In a statement to the Derry News at the weekend, a spokesperson for the PSNI confirmed that “targeted patrols” will be put in place and “additional resources” directed towards community policing in Derry. Superintendent Gordon McCalmont said: “We welcome any opportunity to meet and speak with residents and their representatives and we were happy to do so this week. “We appreciate that recent incidents have left the community unsettled and upset and I want to reassure them that we are working hard to reduce instances of illegal, anti-social and anti-community activity through high visibility, targeted patrolling across the city and by evidence gathering with a view to identifying suspects. “I can confirm that additional resources are being dedicated to our local neighbourhood policing teams and we will keep the resourcing picture under regular review to ensure it is sufficient to address issues of concern to local residents, reduce criminality and ultimately help us place offenders before the courts.”
ADVERTISEMENT - CONTINUE READING BELOW