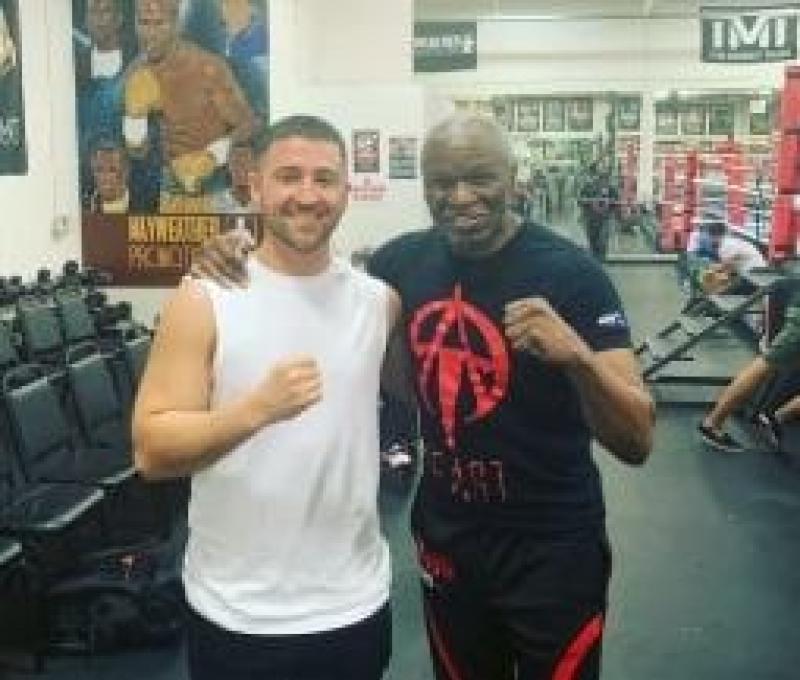 A boxing coach and personal trainer from Creggan has spoken about an ‘amazing’ trip to Las Vegas spent in the company of many of the fight game’s legendary characters never mind his best friend who just happens to be international footballer James McClean. James McClean recently decided to celebrate turning 30 by inviting a few of his close friends and their partners to go on a trip to Las Vegas. So, Conor McBride and the rest of the group jumped at the chance and found themselves there last week in advance of the Tyson Fury v Tom Schwarz heavyweight bout. Conor told the Derry News: “While we were in Las Vegas, I had the idea to visit the Mayweather gym as James and myself are both big boxing fans. Mayweather’s boxing club is one of the most famous in the world. We both knew it would be a once in a lifetime experience so we grabbed it with both hands.” The young Creggan man continued: “I used to box in my younger years so that’s where my love of the sport began.” In fact, sport and general fitness is a huge part of his everyday life.  Conor is a personal trainer by profession working at Puregym on the Strand Road and a fully qualified British Boxing Board of Control coach who holds a BSc (Hons) in Sport’s and Exercise Physiology from the University of Central Lancashire. The Derry News asked him what it was like to rub shoulders with some of the biggest names in boxing at its most glamorous location in Las Vegas? He said: “The experience was amazing-listening and watching Floyd Mayweather Snr at work was incredible. “He talked about the ‘shoulder roll’ which his son Floyd Mayweather Jr, arguably one of the best boxers of all time, is famous for. “We also met Jacob ‘Stitch’ Duran, one of the world’s leading ‘cutmen’ and had a good chat with him as well. “On top of that we went to the Tyson Fury and Tom Schwarz fight which was an amazing experience and met some of the other boxers on the bill. We have to thank Jamie Conlan for getting us tickets for that.” CAPTION: Conor McBride pictured with Floyd Mayweather Snr in his Las Vegas gym.
ADVERTISEMENT - CONTINUE READING BELOW