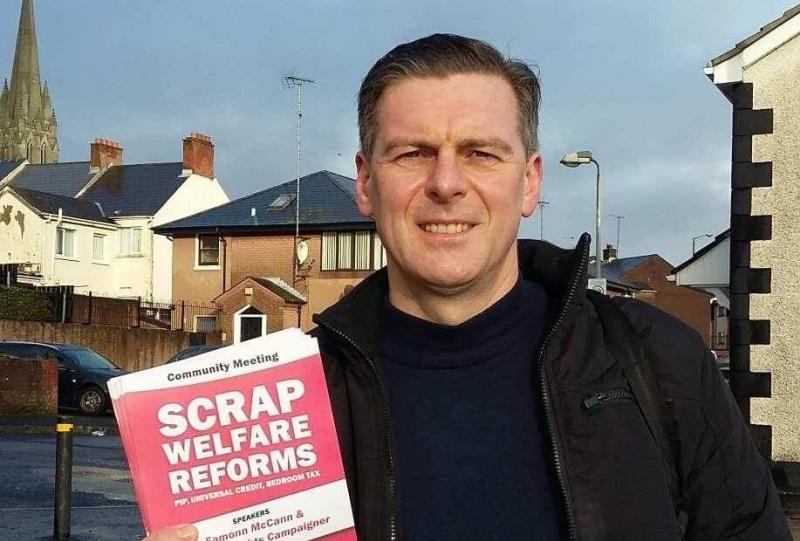 People Before Profit representatives will bring forward a motion at the first full council meeting of the term calling for the “scrapping” of welfare reforms to be made a red-line issue in talks devised to restore power-sharing. Newly elected councillors Shaun Harkin and Eamonn McCann have long been vocal opponents of welfare reform and it is on top of their agenda heading into the first full council meeting since the May elections. Cllr Harkin said it’s well established that welfare reforms have had a devastating impact on many people living in Derry and Strabane. “Stormont parties were complicit with the Tories in ramming through Universal Credit, PIP, the Bedroom Tax and other cruel benefit cuts here that have thrown people into poverty and despair. “If Stormont is to be revived it should be on the basis of reversing these damaging reforms. We can't allow Stormont to continue as it was - imposing draconian cuts and running RHI rackets.” He pointed to an increased dependency on food banks which is “devastating” local families. “The money lost from our local economy as a result of welfare reforms is estimated to be the equivalent to the City Deal every year. “The parties who voted in welfare reforms here voted to further impoverish people in Derry and Strabane,” added Cllr Harkin. “The promise that mitigation's protect people here was an illusion but If they're allowed run-out in March 2020 - the damage will be even greater. Tens of thousands of people across the North - including thousands in Derry will be forced to pay the Bedroom Tax.” Radical action The solution, he says, is scrapping welfare reforms and replacing them with a humane alternative that puts people first – “not Tory ideology and corporate profits.” “We must send a loud and clear message to the Stormont talks from Derry and Strabane that we want welfare reforms scrapped. Stormont must be committed to reversing the damage that's been done. This should be a red-line for all of us. Our Council must take a stance on this. He continued: "We are also proposing the creation of a Council action committee involving trade unions, community groups, advice workers and all other relevant organisations to get people the help they need now and to work to undo the damage caused by welfare reform. “Without radical action communities here will be pushed over a cliff edge. We can't allow this to happen. We need to mobilise at the Council and on the streets to reverse welfare reforms and to develop a serious strategy to tackle growing inequality here."
ADVERTISEMENT - CONTINUE READING BELOW