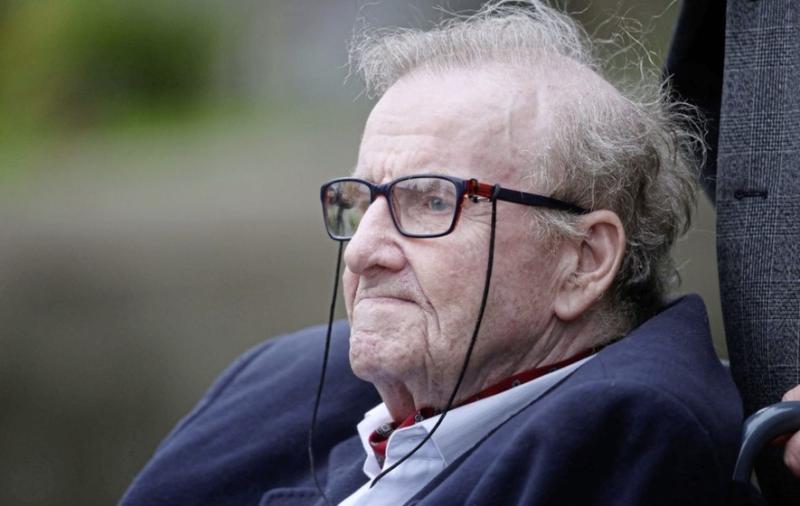 Tributes to the life and political achievements of legendary civil rights figure Ivan Cooper have poured in following the announcement of his death in the early hours of Wednesday morning. President of Ireland Michael D Higgins led the acts of respect to Mr Cooper by saying: “With his unshakable belief in the universality and indivisibility of human rights, Ivan Cooper was a beacon of hope and the embodiment of the power of non-violent actions in pursuit of justice.” One of the founding members of the SDLP, Mr Cooper bore witness to some of the seminal events of the civil rights era of the late 1960s and early 1970s. The former politician openly defied RUC demands to disperse the famed civil rights demonstration at Duke Street in October 1968 and his death comes just weeks before the 50 th anniversary of the Battle of the Bogside in August 1969. However, it will be to the events of Bloody Sunday in January 1972 that Ivan Cooper’s name will forever remain inextricably linked. Mr Cooper himself believed that the events of that day 47 years ago irretrievably changed the course of history in Northern Ireland. Another stalwart of the Civil Rights era in Derry, Dermie McClenaghan said: “Ivan was one of the most courageous people I have ever known. In the context of the Civil Rights struggle in the north, to say that he went out on a limb is hardly enough.” A Book of Condolence in honour of Ivan Cooper was also opened at the Guildhall yesterday by Mayor of Derry City and Strabane District Council Michaela Boyle. Ivan Cooper’s funeral service will take place at St Peter’s Church of Ireland tomorrow at noon and his remains will be interred at Altnagelvin Cemetery afterwards. Mr Cooper is survived by his wife Frances, daughters Sinead and Bronagh, son-in-law Conor and grandchildren Cashel and Luca. Ivan Cooper hailed from Kilaloo near to village of Claudy in County Derry just a few miles from the city. Born into a working-class Protestant family in January 1944, Mr Cooper’s family moved to Derry’s Bogside when he was around 12-years-old. He was briefly a member of the Claudy Young Unionist Association, but in April of 1965 he joined the Northern Ireland Labour Party (NILP). His first foray into electoral politics also came in 1965 when he stood as a NILP candidate at the Stormont general election. Although he attracted a good degree of cross community support, he wasn’t elected. Ivan Cooper’s lifelong commitment to non-violence as a political methodology made him a natural character to fit within the Northern Ireland Civil Rights Association (NICRA). He quickly became a prominent figure in that movement and its campaign for equality as the 1960s drew towards a close. In 1968, he resigned from the NILP and helped found the Derry Citizen’s Action Committee. One of his first major public pronouncements came in the summer of that year and characterised the fundamental principles of the entire movement. At a protest meeting in the foyer of the Guildhall he said that Protestants and Catholics should stand up for their rights together “as the blacks in America were fighting.” The unification of people away from their religious denominations would remain the dominant feature of Ivan Cooper’s political activism throughout his 75 years. He was convinced that both communities in Northern Ireland could work together for common goals. However, some within the Protestant and unionist community viewed this stance as nationalist in outlook and tainted him as a traitor. Nevertheless, Ivan Cooper continued his agitation based on the Civil Rights platform and after the RUC attack on the October 5 march in 1968, he ignored a month-long Stormont government ban on parades in Derry. However, following violence after a number of marches in the city, Cooper called for an end to spontaneous demonstrations. As confrontations between demonstrators and the RUC continued to escalate in early 1969 after a People’s Democracy march was attacked at Burntollet, residents of the Bogside cordoned the area off with barricades. Whilst Ivan Cooper managed to persuade locals to dismantle the barriers, the chances of redeeming an already tense political situation had probably already gone. As the sectarianism he had fought so hard to keep at bay crept steadily back into the issues at hand, most Protestant people who had supported NICRA backed away from the movement. At the Northern Ireland general election of 1969, Cooper was elected as an Independent MP for Mid-Derry and in doing so unseated the sitting Nationalist Party representative Paddy Gormley. The Battle of the Bogside began on August 12, 1969 after violence erupted following the annual Relief of Derry parade by the Apprentice Boys. As the first of three days of fighting grew increasingly heavy, Cooper attempted to restrain rioters by linking arms with Eddie McAteer and John Hume. As the trio were swept aside by the advancing crowd, Cooper was knocked unconscious by a brick. In August 1970, Ivan Cooper became one of the founding members of the SDLP with John Hume, Paddy Devlin and Gerry Fitt. After Stormont was prorogued in 1972, he was again elected as one of the representatives from Mid Ulster to the Northern Ireland Assembly in 1973. After the power sharing administration tumbled in the face of the Ulster Workers Council Strike in 1974, Cooper was again elected to the Northern Ireland Constitutional Convention in 1975. He was also the SDLP candidate for the constituency at both Westminster elections in 1974. In the first one in February that year, he succeeded in splitting the nationalist vote and as a result caused the defeat of Independent MP Bernadette McAliskey. After boundary changes created the Foyle constituency in 1983, Cooper stood aside to let John Hume have a clear run at claiming the seat. After this point, the overall political situation characterised as it was by ever increasing levels of violence, saw Ivan Cooper gradually withdraw from politics and concentrate more on his accountancy work.
ADVERTISEMENT - CONTINUE READING BELOW