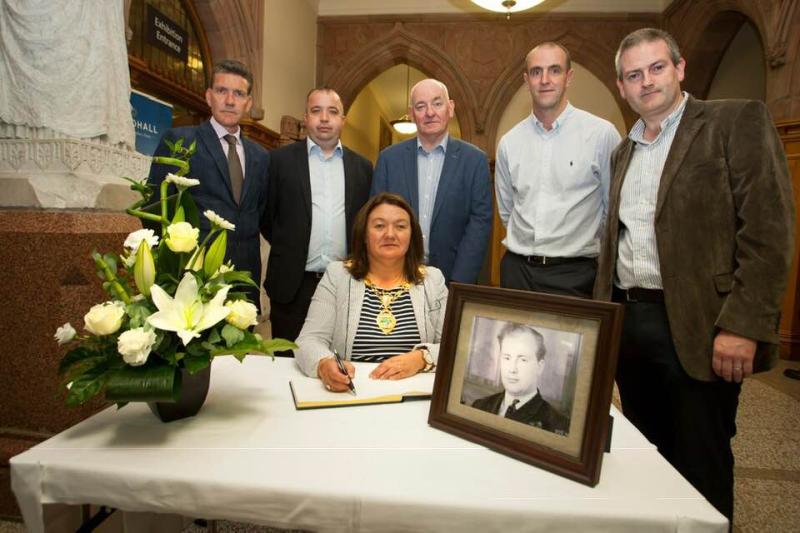 Many people in Derry took to social media to pay tribute to the late Ivan cooper following the announcement of his death on Wednesday. One of the most recognisable faces in Derry from the Civil Rights era, Dermie McClenaghan wrote yesterday: “My great and true friend Ivan Cooper died this morning at 4.30am. “Ivan was one of the most courageous people I have ever known. In the context of the Civil rights struggle in the north and to say that he went out on a limb is hardly enough. “He was chairman of the Citizen’s Action Committee in Derry in the sixties within which he was fully committed in the fight for equality and justice. It was not easy for him to make the decisions that he committed to in the context of that struggle for he was from a unionist community in County  Derry where many of his friends turned against him because of his association with the civil rights struggle. “He had though many friends within his community that did not, and that respected him for his stand. He had many friends in the Bogside where he spent a lot of his young time from the fifties onwards. “He would come to wellington street there and play football with the rest of us in the street. He was much loved and respected by the people in the Bogside and realised from his knowledge of the place what the experiences of the residents of the Bogside were in the context of bad housing, unemployment and emigration. “That realisation never left him and informed his politics. Ivan had a jovial personality and was a wonderful public speaker. He had a generous heart and he will not be forgotten easily. I send my, and Pauline’s, condolences to his wife Frances and his children Sinead and Bronagh. SDLP representatives on Derry City and Strabane District Council also took to social media to pay their respects following Mr Cooper’s death. Councillor John Boyle was Mayor during last year’s 50 th anniversary celebrations for the Civil Rights movement. During a ceremony at the city’s Guildhall, President of Ireland Michael D Higgins presented Ivan Cooper with a token marking his huge contribution. John Boyle wrote: “I am saddened to learn of the death of a political heavyweight and legend. Ivan Cooper was a man of enormous courage and forbearance. A giant of the Civil Rights movement, an SDLP stalwart and a great friend to the people of our city. We shall never see his like again. R.I.P Ivan. Till we meet again. Meanwhile, SDLP Councillor Brian Tierney said: “Two days after my car was burnt, I met Ivan Cooper at an event in the Guildhall. He called me over and said: ‘Don’t let them get under your skin, you’re doing a good job for the people and that’s important, keep it up!’ That has and always will stay with me.” And, SDLP representatives in neighbouring Co Tyrone also paid tribute to Mr Cooper. Daniel McCrossan MLA commented: “I want to thank Ivan for his lifelong dedication to peace and for his dedication to the SDLP. “Ivan’s legacy as a civil rights and equality champion will live long into the history of the North and of this entire island. “Ivan, along with his close colleague John Hume, stood up to the oppressors of the rights of ordinary people here. Ivan stood up for the people of Strabane and for everyone across Northern Ireland in what were very difficult and challenging times. Without him, the North would be in a much worse place today. “The SDLP family across Strabane, Omagh and throughout this island are deeply heartbroken by this tremendous loss of a dear friend and a man who made his mark on this place and in the hearts of all who knew and loved him.” And, former SDLP West Tyrone MLA Joe Byrne commented: "Ivan Cooper was a hugely significant politician who was a founding member of the SDLP. He was a key leader of the civil rights movement. “Ivan helped many people when he was a public representative in terms of housing, planning and welfare issues among other matters. “Above all he was a very strong advocate for peaceful politics. He was a powerful public speaker." CAPTION: Mayor of Derry City and Strabane District Council Michaela Boyle who opened a book of Condolence in honour of the late Ivan Cooper. She is pictured with a delegation of SDLP representatives: Left to Right are Councillor's John Boyle, Brian Tierney, former SDLP leader Mark Durkan, Mark H Durkan MLA and Councillor Martin Reilly.
ADVERTISEMENT - CONTINUE READING BELOW