One of Derry's 'most esteemed citizens' to be honoured with plaque 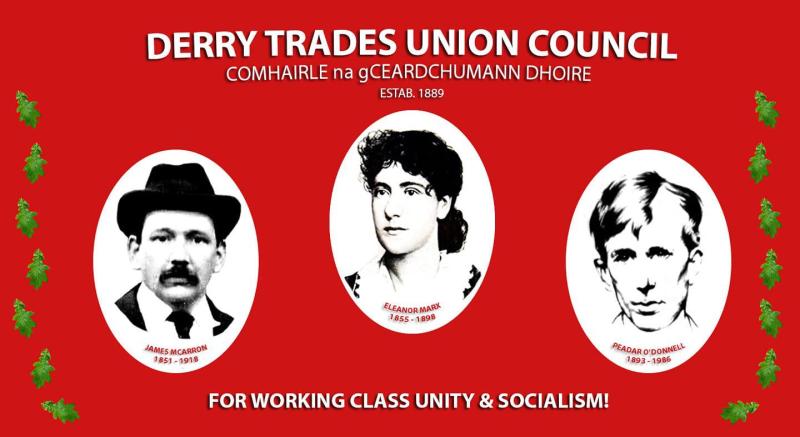 A plaque will be unveiled this weekend in honour of a Derry trade unionist who was described as “one of the most respected labour leaders” in Ireland. On Saturday 29th June 2019, the Derry Trades Union Council (DTUC) intends to honour former Alderman and Trade Unionist Campaigner James McCarron by erecting a plaque at his former family home in Derry followed by a talk and celebration of his life with fellow trade unionists and family members. James McCarron, a trade union leader and an Alderman on Derry Corporation, was one of 500 people who perished when the RMS Leinster was torpedoed and sunk by a German U-boat in 1918. RMS Leinster was an Irish ship operated by the City of Dublin Steam Packet Company. She served as the Kingstown - now Dun Laoghaire - to Holyhead mailboat until she was torpedoed by German submarine UB-123 on 10 October 1918, while bound for Holyhead. A large memorial in the form of a Celtic cross was erected in his memory in Derry City Cemetery. Last year relatives of Alderman McCarron travelled from the U.S.A. to mark 100 years since his death. Mr McCarron, a father of seven from Stanley’s Walk, was a tailor who rose to prominence in trade unions in the 1890’s. He served as President of the Irish Trades Union Congress on three occasions which also included James Connolly and Jim Larkin. At the time, local papers reported the sinking of the RMS Leinster on October 14, 1918 and said there was a “universal feeling of grief” at the death of Alderman McCarron. He was described as “one of the ablest and most respected labour leaders in Ireland and one of the best and most highly esteemed citizens of Derry.” On Saturday the DTUC along with representatives of the current Derry & Strabane District Council will join with members of Alderman McCarron’s family in honouring him with a plaque at his former home at Stanley's Walk followed by a talk by local historian Dr. Adrian Grant and social at Mailey's Bar on the Lecky Road. The plaque unveiling with take place on Saturday 29th June at 1pm on Stanley's Walk followed by a talk and social event at 2pm upstairs in Mailey's Bar.
ADVERTISEMENT - CONTINUE READING BELOW