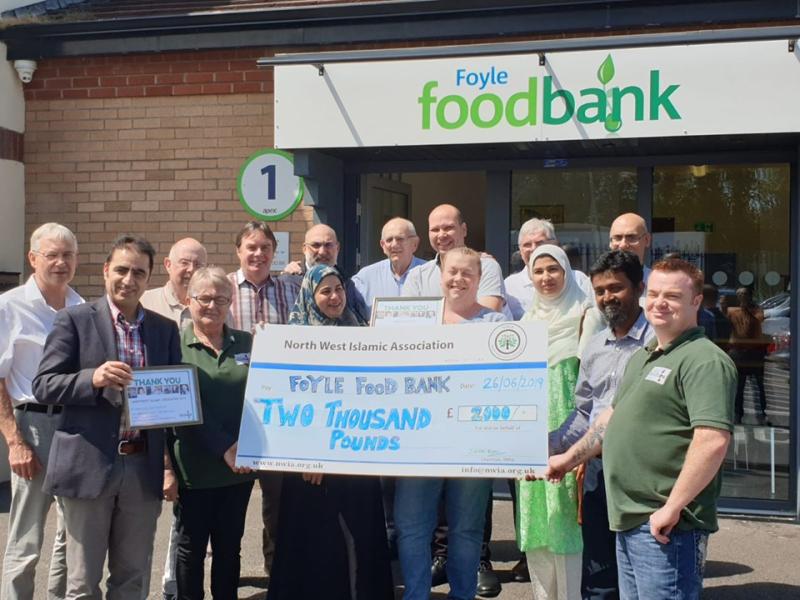 Members of the Muslim community in Derry yesterday handed over a cheque to Foyle Foodbank which was raised through fasting during Ramadan. The money generously donated by the Northwest Islamic Association will provide emergency food supplies for local people in crisis. Zahid Bahli, Chairperson of the NW Islamic Association explained that Ramadan is the ninth month of the Islamic calendar, observed by Muslims worldwide as a month of fasting (sawm), prayer, reflection and community. However, few may know that it is also the month in which the Muslim community donates in abundance to charity, he said. In addition to the financial aspect of giving there is emotional strand of Ramadan which is realising the feeling of hungry human beings. Mr Bahli explained: “There are so many people in the world who couldn’t get the food to feed them and have to sleep hungry. One will not understand this feeling if he is not hungry or thirsty themselves. “The Muslim community in the city has merged these two principles together to raise donation for the people who need food to feed their families. “There is no better time to run this campaign than the month of Ramadan and there is no better local charity to support this good cause than Foyle Foodbank. “We are collaborating with Foyle Foodbank third year in a row for Ramadan fasting challenge. We managed to raise £1,000 first year, £1,200 second year and £2,000 this year with our Ramadan charity fasting challenge donation project.” Foyle Foodbank manager James McMenamin thanked the NW Islamic Association for their continued support. “There has been a steady increase in the amount of money they have donated each year. This enables us to buy food that we’re running low on and will also help with teaching courses in debt management.” Inclusion Each year in the month of Ramadan the North West Islamic Association invites members of the local community to take part in a fasting challenge where participants fast for a few hours up to full day depending upon their capability and preference. Families, friends and colleagues sponsor the participants by donating money. “At North West Islamic community centre we also run this donation appeal and set up donation box as well. Most of the people from Muslim community who attend for prayer and other events put money in this box to support this campaign as well in addition to show support for the participants,” Mr Bahli said. “The most impressive thing is that kids at the Islamic community centre break their kitty boxes to participate in this campaign. “All the participants are invited to join the Muslim community at the time of breaking the fast in Islamic community centre on the day of the challenge. There are a selection of dishes prepared for this day by the Muslim families from different countries “This project strengthens the bonds between communities and helps to know each other and to understand various cultures and traditions in a multicultural environment. There is great sense of friendship, building bridges and sense of inclusion amongst the communities.” He concluded: “These types of projects are vital in a society to promote combined efforts for a good cause and aims which are beyond race, religion and nationality. “North West Islamic association is grateful to the participants of the challenge this year and also to the people who have donated money for this great cause this year and years before and for support in future. We are hoping to make this project bigger and better in coming years.” Photo: Mr Bahli and other members of the NW Islamic Association presenting cheque to Foyle Foodbank.
ADVERTISEMENT - CONTINUE READING BELOW