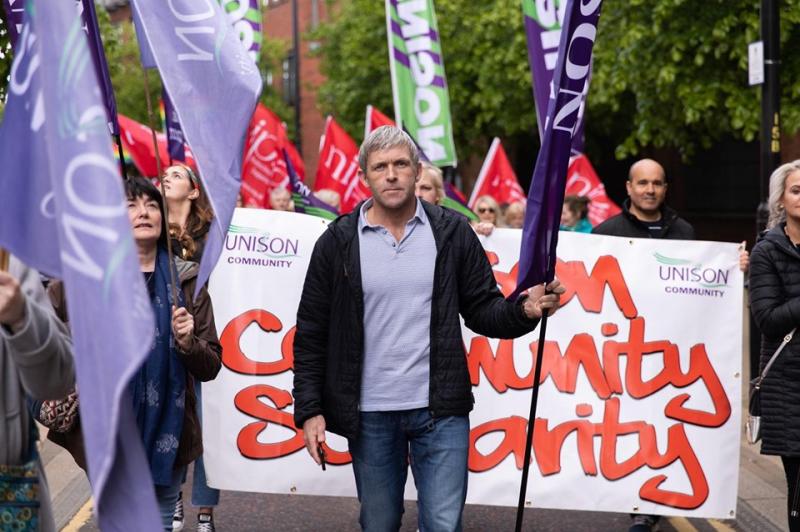 Derry trade unionists are united in their calls for all parties in Northern Ireland to support the rights of workers to holiday back-pay. Northern Ireland could face a massive public sector back-pay bill after a tribunal finding that police officers and civilian staff are owed holiday pay dating back twenty years. Trade unions have argued that all workers should be included, from both the public and private sectors. There are about 208,000 public sector employees in Northern Ireland, official figures show. The public sector bill would be a huge challenge to Stormont's budgets, especially given the payments that will need to be made to RHI claimants. The British government rushed through a two-year limit on miscalculated claims but no such cap was put in place in Northern Ireland which means the costs could be astronomical. Niall McCarroll, Chairperson of Derry Trades Union Council said DTUC will be at the forefront of the biggest working-class action in a generation, demanding that any worker who has had their rightfully earned money withheld, returned immediately. This is in line with the recent Appeal Court hearing, which ruled that workers were owed money as their holiday pay had been based on basic working hours, not the actual hours worked including overtime, which in effect breached European law. The court ruled that miscalculations arose because holiday pay had been based on basic working hours, not the actual hours worked, including overtime. Mr McCarroll said: “Since the Appeal Court ruling all we have heard is how much this will cost the tax payer, impacting on our ability to function and indeed provide much needed already stretched public services, whilst protecting budgetary integrity. “There has been no reference to the integrity of workers who have been forced to use foodbanks, went into mortgage arrears, struggling to survive during austerity driven pay cuts, austerity, which seems to have benefitted the already wealthy whilst attacking working class communities.” Poverty pay The trade unionist questioned whether workers might have been spared such hardship if they were given the correct holiday pay. “This shortfall in take home pay could be as much as £100 a month, which is a significant amount for any worker, especially workers within the Derry and Strabane area, who are already in receipt of poverty pay and terms and conditions which deny them a just and favourable standard of living. “For many workers this shortfall could have been the difference between being able to heat their homes and feed their families.” He added: “Of course, so called business leaders and employers have known about this additional holiday pay entitlement for some time which most chose to ignore, and indeed when challenged by the trade union movement they refused to value their employees and pay out. “The establishment in all its parts has once again been exposed in their continuous cycle of treating working class people and their families as being non-entities within society. “All elected representatives and political parties should come out now, publicly and unequivocally showing solidarity and making it clear that they support workers and their families, in their demand for equality and justice, calling for this Appeal Court ruling to be implemente “The full power and influence of the trade union movement will meet head-on any attempts to challenge this ruling and deny workers their rightful entitlement.” Political response In statements to the Derry News, NI’s five main political parties have gone on record as saying they believe workers should receive payments they are legally entitled to. The DUP is however mindful of implications for the public purse and Sinn Féin believes payments should be paid over a timescale which “protects the viability of public services and businesses." Ulster Unionist Finance Spokesperson, Steve Aiken MLA, said “urgent clarity is needed” but like other parties was concerned about “budgetary implications” for the Northern Ireland Civil Service and its associated public bodies. He also expressed disquiet about the impact on countless business owners. Stephen Farry of Alliance, who was employment and learning minister in 2014, stands over his decision not to introduce a cap to protect taxpayers from backdated pay claims. He insisted he acted honourably and with integrity and believed that imposing the cap would have been "counter-productive" as it could have caused an "artificial cliff-edge", leading to a spike of claims before the cap could take effect. And SDLP policing spokesperson Dolores Kelly said when the issue was first identified, action should have been taken to provide certainty, compensate workers for the errors and to insulate budgets from a significant hit if it would impact the delivery of public services. She also pointed the finger at Mr Farry: “It is a matter of profound regret that the Minister of the time failed to raise the issue at the Executive or introduce measures to limit public sector exposure in conjunction with other parties, Trade Unions and workers.” Photo: Chairman of Derry Trades Union Council, Niall McCarroll.
ADVERTISEMENT - CONTINUE READING BELOW