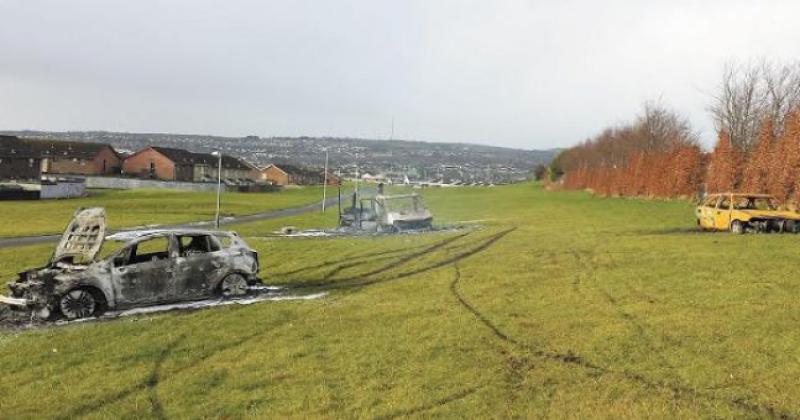 The PSNI has vowed to tackle the scourge of “death driving” in Derry by targeting those responsible through additional resources and taking action against irresponsible car sellers. Car crime has been a much talked about topic in the past month since the tragic death of 18-year-old Caoimhin Cassidy on June 1. The young man lost his life after a stolen car he was in crashed and caught fire. But the exact circumstances of the incident remain unclear and it is suspected that other individuals were in the vehicle at the time. Since then numerous offences of the same ilk have taken place across the city. Last week the Derry News reported that a car was found flipped over on Creggan Road, prompting fears that members of the public could be caught up in these “reckless acts”. The PSNI posted on Facebook about seizing a number of vehicles. “In the last few days we’ve seized three “death driving vehicles” we also found Class A & C drugs in one of the cars with more Class A seized on a follow up house search. “That’s four people Charged to court, one reported to the PPS and one issued a caution for public order offences,” it read. When questioned about additional steps it is taking to eradicate car crime, the PSNI said it is all too aware of the current concern amongst the community in relation to the anti-social and often dangerous driving that has recently taken place on residential roads and streets in the city. Police tactics Chief Inspector Johnny Hunter said: “I want to assure residents that we are devoting considerable resources into trying to proactively combat this crime by implementing, among other tactics, high profile patrols in critical areas and making arrests whenever possible. “So-called ‘death driving’, whether in stolen cars or in uninsured, unregistered cars is a blight on the local community. The individuals driving these cars offer nothing but destruction and potential injury or death. “They have little to no thought for the local community or for the consequences of their reckless actions.” Local councillors have also highlighted the dubious selling of cars to these young people for as little as £20. Chief Inspector Hunter continued: “I would also remind anyone selling a cheap used car, to seriously consider their personal responsibilities. I can understand how tempting it may be to sell a cheap old car for cash, but please consider the consequences of doing so. “In the first instance, it is the registered keepers’ responsibility to tell the DVA that they have sold, transferred or disposed of your vehicle. Failure to do so is a registration offence and will result in a penalty notice being issued. Failure to pay could result in the registered keeper being taken to court. “While we are working with our statutory road safety partners and are positive about making progress in addressing this issue, we still need the local community’s support. Often times communities know who these individuals and we need those in the know to come forward. “If anyone has any information linked to stolen cars or cars being driven erratically or any other community safety issues, please contact us on 101 so we can work with you to do something about it,” he concluded. Alternatively information can also be provided to the independent charity Crimestoppers on 0800 555 111 which is 100% anonymous and gives people the power to speak up and stop crime. Photo: burnt out cars that were abandoned by so-called 'death drivers' in Galliagh previously.
ADVERTISEMENT
Advertise with Us
ADVERTISEMENT
Advertise with Us
ADVERTISEMENT
Advertise with Us
ADVERTISEMENT
Advertise with Us