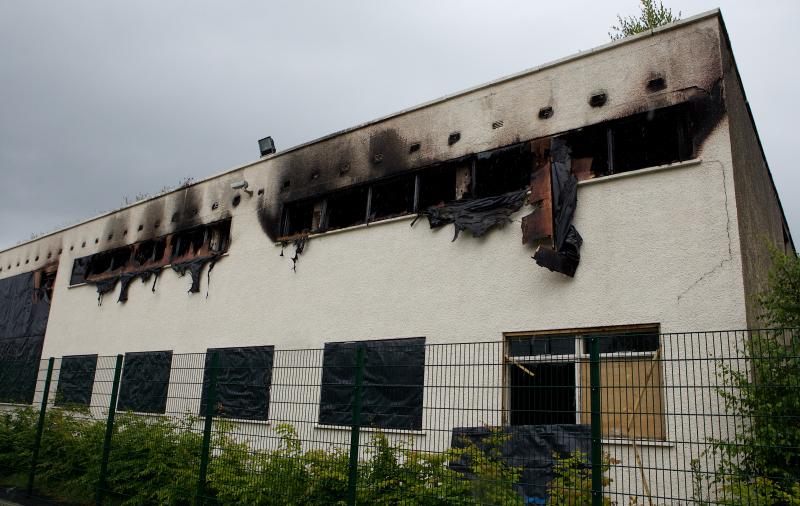 The Education Authority (EA) has said it has taken steps to secure the site of a former secondary school at Drumahoe after it was deliberately set on fire on Monday night (July 8). Hilary McClintock, DUP Councillor for the Waterside district said: “I received a phone call just before 8pm and was told there was a fire at the school and that a number of young people, possibly up to nine of them, were seen running away from the premises. “The fire was started deliberately and the back of the school has been gutted. The fire service brought it under control quickly and a police investigation has already started. “The building is derelict so it’s very, very foolish and dangerous for these young people to have done this. They could have been caught inside a burning building. “Apart from that, the building now looks even worse now than it already did and takes away from the look of the brand new play park right beside it.” The amalgamation of the student bodies Faughan Valley High School and Clondermot High School after their closure led to the opening of Lisneal College in 2007. In January last year Derry City and Strabane District Council began the process of commissioning urban design consultants to produce proposals to overhaul the site which has been derelict for over ten years. The local authority is currently head of a consortium that includes Drumahoe Community Association, Waterside Neighbourhood Partnership, Tullyally Community Partnership, the EA and Drumahoe Primary School. Council’s Environmental and Regeneration Committee approved a grant of between £10,000 and £15,000 towards a master planning process similar in size and scope when the redevelopment of the former Immaculate Conception College at Gobnascale was under consideration. Councillor McClintick confirmed that this process was formalised at Council last month and design consultants have now been appointed. “We should now see some progress at this site,” she said. And, a spokesperson for the EA told the Derry News: “We are aware of the fire damage caused to the former Faughan Valley High School site. “EA can confirm that the Fire and Rescue Service attended the scene and brought the fire under control and the PSNI were also in attendance. “We have assessed the damage and taken the appropriate remedial action. Work has already been instructed to ensure that measures are in place to re-secure the premises. EA is working in conjunction with the Council to take forward a masterplan in identifying future and viable options for the former High School site.” CAPTION: The site of the former Faughan Valley High School at Drumahoe.
ADVERTISEMENT - CONTINUE READING BELOW