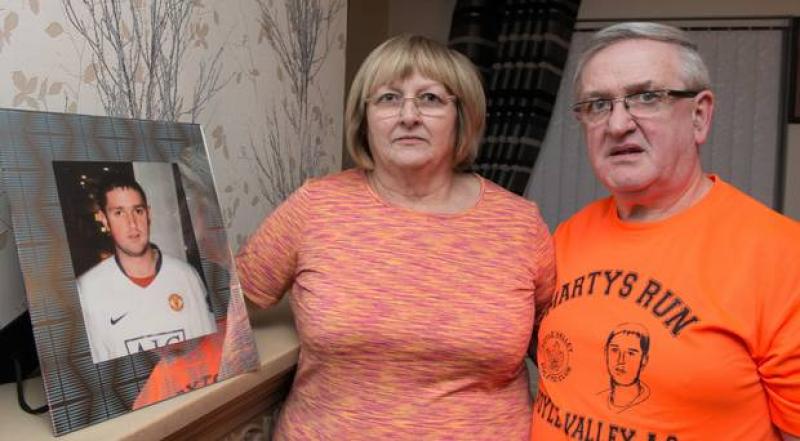 The father of a young man killed by the actions of a drunk driver almost ten years ago has said the sanctions against UUP Councillor Derek Hussey are not strong enough. Mr Hussey has been banned from his post as a Councillor for 15 months in relation to a drink driving conviction. The Commissioner for Standards in Local Government ruled earlier this week that the Derg district representative on Derry City and Strabane District Council had breached the Code of Conduct for Councillors. Legal representatives for the barred councillor say he will appeal the decision through the High Court. Martin Gallagher was 25-years-old when he was struck by a car on the Racecourse Road as he was returning to his Shantallow home from Halloween night celebrations in Derry city centre in the early hours of November 1, 2009. The driver of the vehicle, Jonathan McGonagle was charged with a series of motoring offences including failing to stop or report the accident. McGonagle was also faced with charges of driving without a licence or insurance and driving while unfit through drink or drugs. After the accident the driver fled the scene. During the trial the court heard that the defendant was driving between 41 and 51mph in a 33mph zone when he hit Mr Gallagher throwing him 33 metres through the air. He was found to be over the drink driving limit and cannabis was also detected in his system. Following his conviction, McGonagle was handed a six-year jail term-half of which was served on licence and he was banned from driving for a period of ten years. Speaking to the Derry News about Derek Hussey’s disqualification as a public representative, Martin Gallagher Snr said: “Speaking as a father of someone killed by a drunk driver, this didn’t go far enough. “If he had been caught once and shown remorse I could understand that, but he was convicted three times. He should have been sent to jail." Mr Gallagher also challenged Derry City and Strabane District Council on the matter. “Derry City and Strabane District Council (DCSDC) have to hold their hands up here. When he was convicted for the third time in 2016 he was a member of the Council. When he was elected as Deputy Mayor, he was clapped in the council chamber.” Mr Gallagher also said that he will be requesting a meeting with the Chief Executive of DCSDC and the city solicitor as soon as possible to discuss the issues raised by Derek Hussey’s 15-month disqualification. “I will be requesting the meeting to make sure something like this never happens again. I feel like people may as well visit my son’s grave and spit on it.” A spokesperson for Derry City and Strabane District Council confirmed that it has received formal notification of the ruling from the Local Government Commission for Standards on this matter. The spokesperson explained that it has not yet received a request for a meeting but that it is happy to facilitate one. The spokesperson added that the families met with the former Mayor Cllr John Boyle last year in relation to this matter and clarification of the complaints procedure and the role of the Local Government Commissioner in overseeing elected members was given. CAPTION: Martin and Elizabeth Gallagher whose son Martin was killed by a drunk driver in 2009.
ADVERTISEMENT - CONTINUE READING BELOW