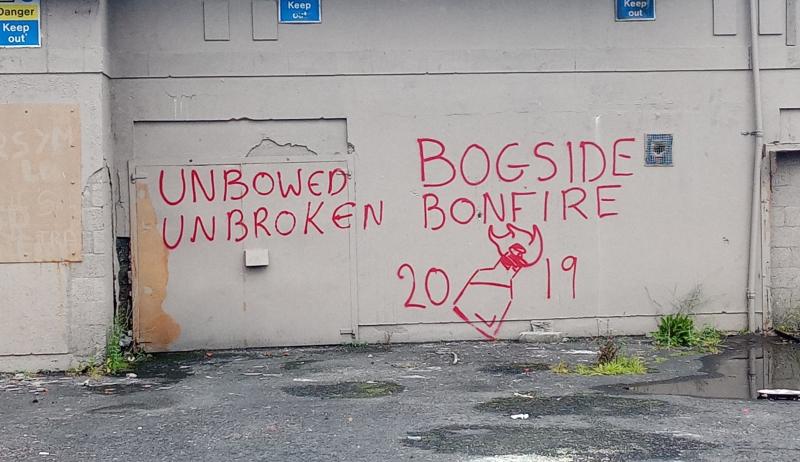 Graffiti has appeared in Meenan Square which appears to suggest that a bonfire will be erected in the area this year.
The graffiti defiantly states, "UNBROKEN UNBOWED, BOGSIDE BONFIRE 2019", and is embellished with a petrol bomb.
In today's Derry News it was reported that 'fragile talks' were ongoing behind the scenes between community workers and young people in the Bogside.
However, it appears that these talks have collapsed and a section of young people are intent on having a bonfire this year despite opposition from within the community.
Bonfire materials have been gathered under the Lecky Road flyover where signs have been made encouraging people to leave 'wood and sofas'.
The Meenan Square site has been a magnet for anti-social behaviour in recent years and was at the centre of prolonged rioting in the summer of 2018.
On August 15 last year poppy wreaths bearing the names of murdered police officers were placed on top of a bonfire at Meenan Square.
New owners have secured the site and made efforts to improve it's aesthetic appearance.
ADVERTISEMENT - CONTINUE READING BELOW