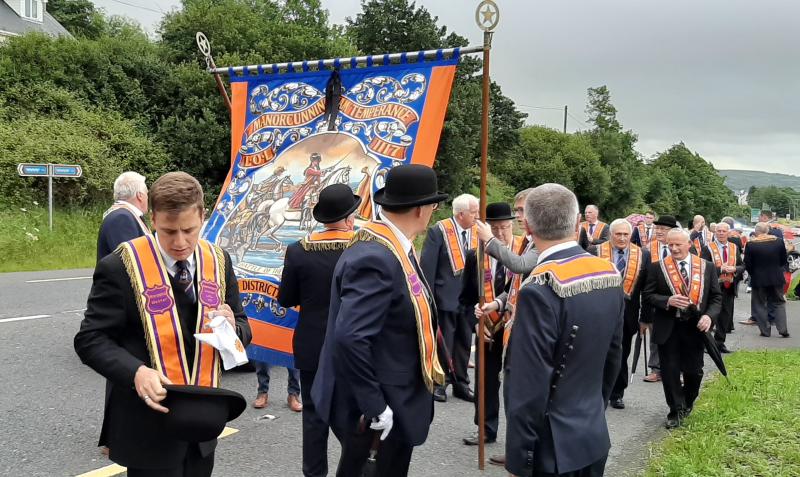 Traffic was halted briefly this morning the main Derry to Letterkenny road to allow a smaller feeder Orange Parade to cross.

As has been the tradition for many years, members of the Manorcunningham Loyal Orange Lodge 1117 from East Donegal assembled at the Orange Hall in the village this morning to prepare for the Twelfth of July celebrations.

Having briefly marched through the village, they then made their way to the main N13 Letterkenny to Derry road.

Gardaí were in attendance to briefly halt morning traffic in order for the parade, led by the Manorcunningham Pipe Band, to cross to the far side where the marched for a couple of hundred metres before boarding a bus bound for Coleraine, which is one of 18 venues across Northern Ireland hosting Twelfth of July demonstrations today.

Orange Lodges have existed in the Manorcunningham area from the early years of the 19th Century.

The present lodge in Manorcunningharn L.O.L. 1117 came into existence in 1919.

Earlier this year, a new Junior Lodge was formed.

"It's about educating the wains about what we are, letting them see our culture and enjoying it and respecting other people's cultures," explained Worshipful Master, Keith Gordon.

Coleraine is hosting lodges and bands from all over the north-west, with the parade due to start at 11.00 am

Among the other bands from Donegal listed to take part were Newtowncunningham Accordion Band, and Raphoe Pipe Band, Thiepval Memorial LOL 1005 Pipe Band.

Meanwhile, a number of Orange Lodges from south Donegal will be in attendance at the Lisnaskea demonstration in Fermanagh.

Last weekend around 50 lodges were present for the annual Twelfth Parade in Rossnowlagh.