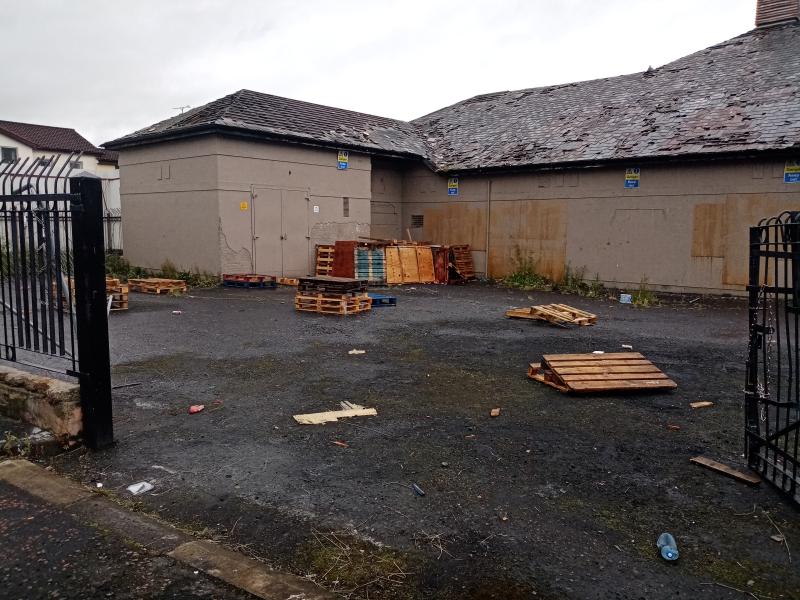 Bonfire material is being stored in Meenan Square after barriers previously used to secure the site were taken down yesterday. A sign has been placed outside the gates encouraging people to "dump wood". The vacant Bogside site has been steeped in controversy for a number of years due to persistent anti-social behaviour and contentious bonfires. It was also at the centre of prolonged rioting last July. The following month, on 15 August 2018 poppy wreaths bearing the names of murdered police officers were placed on a bonfire erected there. The Derry News reported this week how talks aimed at steering youths away from the bonfire appear to have broken down after graffiti was scrawled on the site, which reads: "UNBROKEN UNBOWED, BOGSIDE BONFIRE 2019". Other graffiti in the same red paint reading, ‘Republican Socialist Youth Movement’ (RSYM), can be seen on shop shutters nearby. The RSYM is linked to the Irish Republican Socialist Party (IRSP). People Before Profit Cllr for the Moor area and Bogside resident, Eamonn McCann, said that in the past he has attempted to dissuade young people from putting controversial items on the bonfire. “It’s my experience that it’s difficult to convince young people to do something they don’t want to. I will make efforts again as I have done in the past, totally unsuccessfully, to persuade them not to decorate the bonfire with union flags, placards of Sinn Féin and the SDLP, which I’ve seen, and poppies.” “There’s a real dilemma there and I don’t claim for an instant to have a solution to it but I do know that sometimes you hear people praising the young people of Derry saying how clever, and bright, and decent they are, and then a while later people of the same age are being denounced as hooligans. “Quite frequently these are the same young people just in a different place and at a different time.” Cllr McCann said anti-social behaviour is a universal problem, but in Derry it is exacerbated by the Troubles, where it is given a “jagged edge”. “There’s an endless argument about how bonfires, and much else, are treated by the state in protestant areas and in catholic areas. Whether or not it is real, it is really believed. “So, it’s difficult to see how you would eliminate bonfires from the Bogside other than as part of an overall elimination of bonfires. “We live in a very difficult and awkward situation, this is part of the weight that history lays upon us and it can’t be shrugged off and is very difficult to make progress while it’s there,” he added. ‘Future projects’ Redevelopment of Meenan Square would at least discourage it youths from building it in such a centralised area, he believes. Plans have been in the works for a considerable time to redevelop the site but as August 15 approaches little headway has been made. SDLP Cllr John Boyle said at this time of the year people of the Bogside have some degree of “anxiety” around bonfires. “The overwhelming majority of people in the neighbourhood don’t welcome bonfires and clearly there are elements of anti-social behaviour that can become factors. “On a broader note, I am very anxious to see that the property at Meenan Square is completely secured and that it isn’t going to be used for the storing of bonfire materials, and I will be liaising with the local council and indeed the owners of the property, to ensure that all measures are put in place to secure the property and to discourage those who want to build bonfires or store materials. “In the longer term I would clearly like to see that entire site redeveloped and that is something people in Meenan Square and the broader Bogside area want to see. I will continue to work to see future projects come to fruition.”
ADVERTISEMENT - CONTINUE READING BELOW