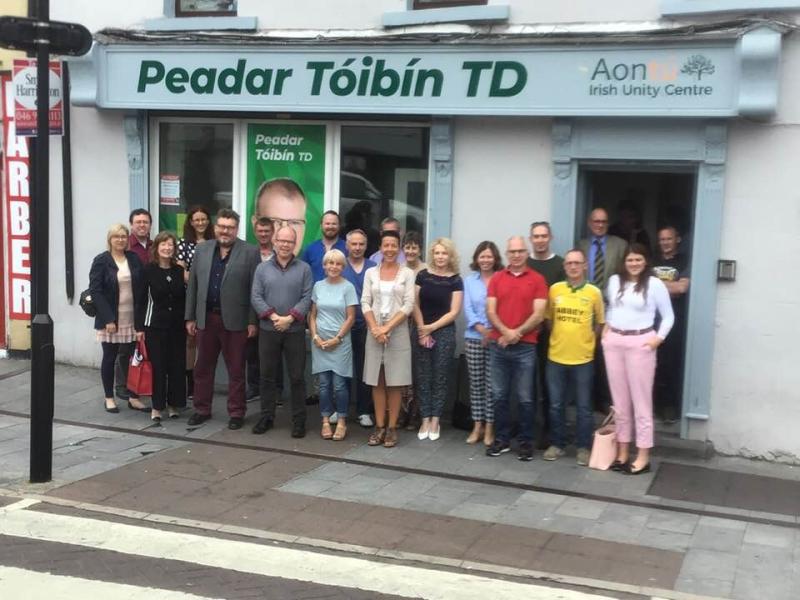 A recently elected representative on Derry City and Strabane District Council has been installed as deputy leader of republican party Aontu.

Dr Anne McCloskey, a former GP at Shantallow health centre in the city, was elevated to the position at the weekend.

Aontú leader Peadar Tóibín, the Meath West TD, congratulated Dr Anne McCloskey for her election as deputy leader of the party which he founded and said:  “I am delighted that Dr McCloskey has been elected as Aontú’s deputy leader. Dr McCloskey has committed so much of her life to supporting the wider community and advancing the political empowerment of the most vulnerable and marginalised, especially in her own city of Derry.

“Dr McCloskey has long served her community as a GP and as a political campaigner. She is an Irish republican in the truest sense of the term. Following in the footsteps of the United Irish movement, Dr McCloskey is dedicated to achieving Irish unity where the self-determination of the Irish people is realised and where genuine pluralism and a national democracy flourish.”

“Dr McCloskey has been to the fore in projecting a vision of compassion and care for mothers and babies. An adherent of a rights-based society, Dr McCloskey is a committed defender of the right to life of everyone, believing that without the right to life, all other rights are gravely undermined.

“In recent days, Dr McCloskey has led the charge against the British Parliament’s attempts to ride roughshod over the rights of people in the north of Ireland to determine their own laws. Unlike Sinn Féin and the SDLP, Dr McCloskey and Aontú have stood firm to defend the principle of Irish self-determination, believing that no laws in Ireland, north or south, should be determined by British Lords, Baronesses or MPs.

"Cherishing all the children of the nation equally is at the heart of Dr McCloskey’s outlook and politics, directly shaping her stalwart opposition to the imposition of the extreme British Abortion Act in the north.

“Dr McCloskey is a proponent of economic justice and prosperity for the people of the north. Currently 300,000 people in the north of Ireland are living in poverty, 30,000 food parcels were handed out last year to families that are hungry, 11,000 people are homeless in the north, Derry is without the 3rd level education that it needs and the north west is being hammered due to the lack of infrastructure. And yet the establishment MLAs do not turn up for work and draw down millions of pounds in salaries”.

CAPTION: Dr Anne McCloskey, pictured centre, who was elected as Deputy Leader of Aontu at a meeting of the party's Ard Chomhairle in Navan last weekend.
ADVERTISEMENT - CONTINUE READING BELOW