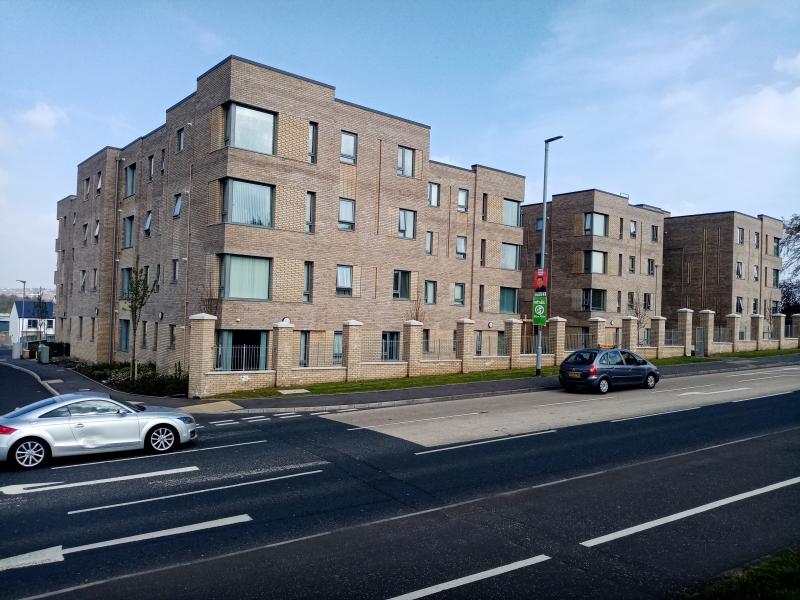 A Housing Association and the police have come under pressure to decisively deal with anti-social tenants who are making life a misery for residents in one of Derry’s newest housing estates. Video footage appeared online at the end of last week showing a group of men and women involved in a brawl outside Balliniska Heights. It is the latest in a string of similar incidents at the housing development which has built itself a reputation as an anti-social hotspot since welcoming its first tenants in April of 2018. Sarah Doherty has been there since the beginning and she said there has been lawless behaviour throughout that time. She lives in one of the houses in Balliniska Avenue but the criminal elements are confined to the apartment block named Balliniska Heights. Sarah is afraid to let her child out to play in the park as a result. “Since I’ve been there I’ve noticed non-stop partying, people taking drugs, someone was stabbed in the head, a person died over-dosing, a couple fighting outside, a paedophile overlooking the park had to be removed too. “People off their heads on drugs crashed into my car recently too when my wain was with me. He was arrested. “And the fight last Thursday was the latest.” She added: “You can see them drinking and taking drugs during the day so you know something bad is going to happen." A court case is also ongoing after a man allegedly raped and attempted to kill a woman in Balliniska Heights. The alleged victim was discovered on the Northland Road with serious injuries. The case is still active with the accused due to appear at a Magistrate’s sitting this week. All seven charges from the first appearance on 8th April 2019 remain. There is a collective view amongst residents in Balliniska Avenue and Heights that these anti-social individuals must be removed but they feel Clanmil Housing isn’t taking decisive action. Sectarian abuse has also been witnessed in the area with people being called “Fenians” by a certain family. “Clanmil says it’s taking action but there are people who’ve been a problem for a while and they’re still living here. I don’t think they’re doing enough," Sarah said, "realistically there should be strikes, but people with knives etc should be removed straight away. “How can you feel safe as a single mother with all this going on.” She added: “When I was looking for a house I had to be interviewed, so I don’t know how these people got in with criminal records. “Even today I seen the police here arresting people, it’s just constant now. “But they’re not going to force me out because I like living here.” Police response Responding to the latest incident and addressing residents’, a PSNI spokesperson said that on Thursday, 18th July, police received a report of an altercation and anti-social behaviour in the Baliniska Heights area of Derry. On arrival of police there was no sign of this altercation. However, police spoke to a number of persons in the area. Police also aware of a video that was posted onto a social media platform. Enquiries are ongoing into these reports. Inspector John Moore said: “We will take a strong and proactive stance against anti-social behaviour. “I would like to reassure the local community that we will deal with any offending behaviour in a robust manner. “We are always here to listen to community concerns and are aware of the effects this type of behaviour can have. The support of local people, community and voluntary representatives are essential ingredients to help improve the quality of life for the local residents. “We will continue to work in partnership with our local council and elected representatives as well as community reps and Community Safety Wardens to address the concerns of the local community. “Anyone with any concerns regarding anti-social behaviour should contact police on 101.” Legal action In a statement to the Derry News, a spokesperson for Clanmil Housing said it takes the security and safety of its tenants very seriously, and invests heavily to ensure people feel safe in their homes. “We have been working with the PSNI to deal with a small number of households whose unacceptable behaviour has been unsettling this neighbourhood. We have been taking, and are continuing to take, action against those involved. As a result, a number of these people no longer live at this development and legal action is ongoing against others,” she added. “We are committed to safeguarding the confidentiality of the people who live in our homes and cannot comment on individual tenants. “Following this recent incident we are meeting with the PSNI to pursue action against those identified in the video. We would ask anyone who witnessed the incident to contact us and the PSNI to assist with our investigations”
ADVERTISEMENT - CONTINUE READING BELOW