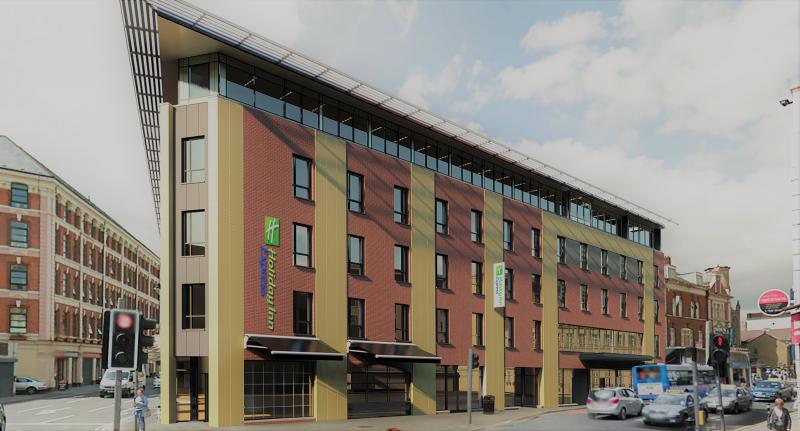 Derry’s newest hotel officially opened its doors for business yesterday and in the process brought with it over 40 jobs. The Holiday Inn Express on the city’s Strand Road represents a £7 million investment in the city and the chain’s owners, Intercontinental Hotels Group (IHG), have said its presence will not just enhance employment but will create business opportunities for service providers across the region as well as in Derry city centre. With 119 bedroom’s the new hotel is now the second largest in the city and as well as having all the state-of-the-art facilities associated with modern hotels its central location is within walking distance of all the city’s main tourist attractions, bars and restaurants. General Manager Stephen Redden said that he is confident the new hotel will add to the vibrancy of the Strand Road and act as a compliment to existing and emerging businesses. “We are delighted to open the doors and add a fresh dimension to the city’s accommodation. We are proud to generate 44 local jobs whilst greatly adding to the continued growth of the destination,” he said. However, yesterday’s official opening represents just the first phase of the development. Another 31 bedrooms will be added before the end of 2019 and, the second phase of the project will also see the introduction of a new bar and restaurant. Next year will see the addition of 25 self-catering apartments that the owners say will provide an ideal stopover for those attending corporate events in the hotel’s meeting rooms. This fits in with IHG’s introduction of Next Generation-a innovation geared to meet the needs of today’s ‘express’ traveller. Amongst the first guests at the Holiday Inn Express have been teams competing in this week’s Foyle Cup including Glenavon, Barnsley FC and Beann Mhadaghain FC from Belfast. The opening of the hotel was welcomed by President of the Londonderry Chamber of Commerce, Brian McGrath who said: “This is excellent news for the city. Our tourism offer in the region is steadily growing and this new £7m investment by Holiday Inn adds another great hotel to our growing list and provides more choice for visitors. “The creation of 44 new jobs in the process is a great boost for the city, not to mention the wider benefits that will be felt in the local supply chain.”
ADVERTISEMENT
Advertise with Us
ADVERTISEMENT
Advertise with Us
ADVERTISEMENT
Advertise with Us
ADVERTISEMENT
Advertise with Us