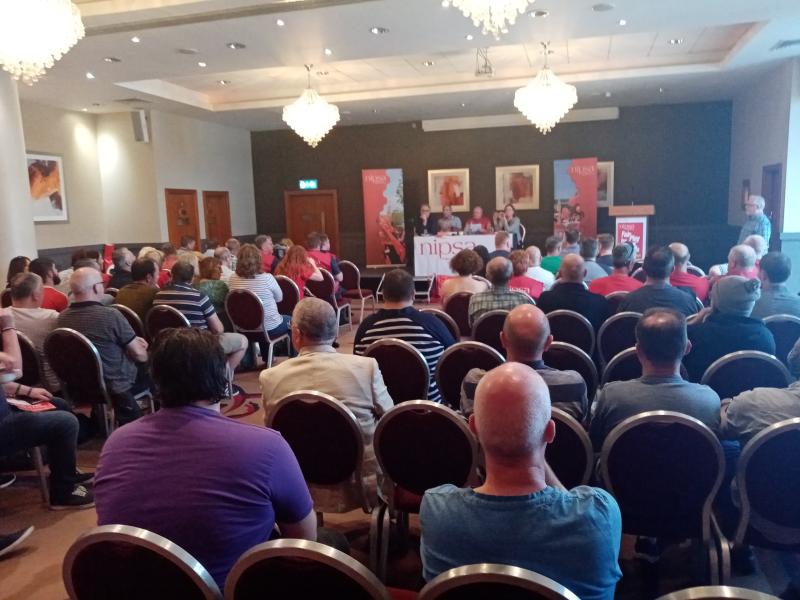 Civil service workers in Derry have pledged to take further industrial action after a strike was held on Friday. Following Friday’s pickets, Civil Service workers affiliated to public service Trade Union NIPSA were told that Sue Gray, Permanent Secretary at the Department of Finance, “doesn’t give a damn about you”. They were cautioned that one day of action would not be enough to bring about meaningful change, therefore, plans are in motion to take further strike action. Comments made by NIPSA’s Deputy General Secretary, Carmel Gates, were greeted by applause when she called for additional strike days from today onwards and action short of all-out strikes. Members of political parties were present to show their support, including representatives from Sinn Fein, the SDLP and People Before Profit. Workers in Derry and Belfast gathered for strike action over pay and conditions. NIPSA members in the NI Civil Service were on the picket lines at a number of buildings in Derry. Those included Foyle Jobs and Benefits Office on Asylum Road, Carlisle House on Carlisle Road and Orchard House on Foyle Street from early morning until 10.15am. After the picket lines, members gathered for a rally at the City Hotel which began at 11.15am. The 24-hour strike was organised to highlight an imposed “pay deal” of 1.25% and changes to terms and conditions of employment which union officials claim have been implemented without proper and meaningful consultation. Ms Gates addressed the rally along with Gerry Murphy, President of Irish Congress of Trade Unions (ICTU) and Niall McCarroll, Chairman of the Derry Trades Union Council (DTUC). Mr McCarroll addressed a packed room at the City Hotel where he said all workers had taken action to bring about better working conditions. He said the Tory government was “attacking working class communities” and it is time to “fight back” by building solidarity amongst workers. “Let us together build up a working-class spirit and let the Tories know we can bring them down.” Meanwhile, Ms Gates was keen to dispel the notion of civil servants having well-paid “cushy jobs” as an “absolute myth”. She added: “There are civil servants relying on tax credits, second jobs, credit cards to bring them to the end of the month or to pay off debts and those using food banks.” She praised those in the room for leading the way, recognising that many, if not all of them, could ill afford to go without pay for the day. “We have to say, enough is enough, they can’t keep piling work on us and saying they can’t even give us a decent pay increase. “Many workers are 15=20% worse off than ten years ago in real terms.” Referring to legal action which has been initiated for “failure to consult”, she informed those in attendance, that the judge has decided to forego a pre-hearing by instead fixing a court date. She added that there will be a “few white faces” in the Department of Finance who know their actions have been “discriminatory” as they have been “acting outside the law”. And concluded by saying “it’s time to strike a blow for all workers”. Other members of the audience were afforded an opportunity to speak and one worker, named Amy, said the government does not care about workers standards of living, nor their mental and physical health. She demanded a living wage for all. A motion was put forward by People Before Profit at last month’s full Council meeting calling on the Permanent Secretary at the Department of Finance to provide a “fair and just settlement” which was backed by all councillors. PBP Councillor Shaun Harkin voiced his support for all “necessary action”. NIPSA representative Ruaidhri O’Sandair had one final message for the department of Finance, “Sue Gray, where’s our pay?”
ADVERTISEMENT - CONTINUE READING BELOW