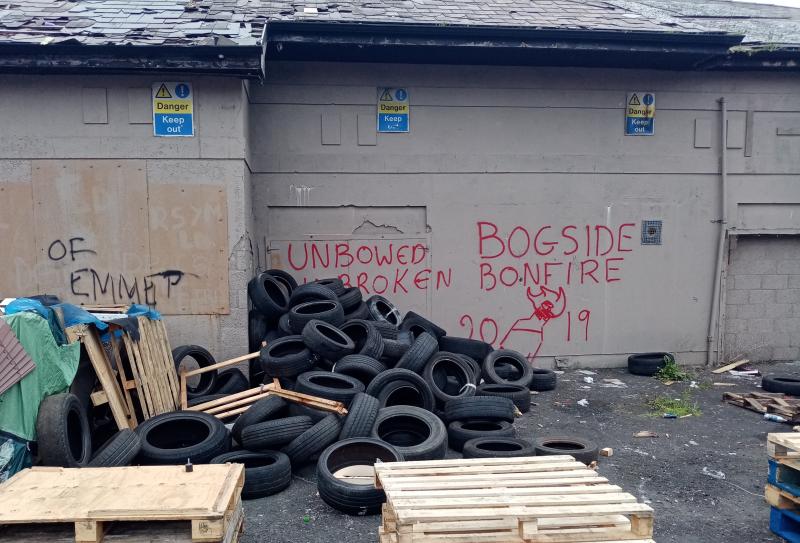 Derry councillors have condemned the burning of toxic tyres as materials continued to accumulate yesterday in the Bogside ahead of this month’s bonfire. In excess of forty tyres were piled up at the vacant Meenan Square site yesterday, alongside dozens of wooden pallets and other items. The burning of tyres is illegal as the smoke contains highly toxic chemicals. The police said it has no legislative power to remove bonfires or waste which has been illegally disposed at sites but will support other statutory agencies to carry out their role if required. Derry City & Strabane District Council was asked whether it will take steps to remove the tyres but did not provide a response at the time of going to press. It should be noted that there is a substantial amount of material gathered for an August 12 Apprentice Boys commemoration on Irish Street which does not include tyres, and the July 12 bonfire in the Fountain estate did not contain tyres. The Derry News reported that recent talks aimed at steering youths away from the Bogside bonfire appear to have broken down after graffiti was scrawled on the site, which reads: "UNBROKEN UNBOWED, BOGSIDE BONFIRE 2019". Young people in the area have made their intentions clear that they wish to have a bonfire despite opposition from within their own community. Sinn Féin Councillor for the Moor Patricia Logue said talks are still ongoing between young people involved in collecting the bonfire materials and local stakeholders. She added: “The burning of tyres is hugely damaging to the environment and to people's health. They have no place on bonfires and they need to be disposed of in a safe manner.” Bonfires on 15 August are traditional in some nationalist parts of Northern Ireland to mark the Catholic Feast of the Assumption. To others, they are lit to commemorate the introduction of internment without trial of republican suspects, which was introduced by the government in 1971. There was widespread condemnation in Derry when the names of murdered police and prison officers were placed on a bonfire at Meenan Square last August. The bonfire followed similar incidents in unionist areas when effigies of leading Sinn Féin members, including the late deputy first minister, Martin McGuinness, were burned at loyalist July 12 celebrations. Derry City and Strabane District Council (DC&SDC) has attempted to address the issue of contentious bonfires in the city by establishing a multi-agency working group in parallel with injecting PEACE IV funding into separate initiatives. The Council’s bonfire policy is said to be based upon a community engagement approach. That approach alongside statutory structures has seen engagement at community level and on a cross community basis right across the Council area, according to a DC&SDC spokesperson. The PEACE IV Programme is supported by the European Union, managed by the Special EU Programmes Body (SEUPB). Match-funding has been provided by the Executive Office in Northern Ireland and the Department of Rural and Community Development in Ireland. People Before Profit councillor Eamonn McCann described bonfires as “declarations of tribal allegiance” which have their roots firmly based in the past and questioned whether throwing money at the issue is the answer. “The idea of a cross-community bonfire is a contradiction in terms sadly. Any diversion away from bonfires is fine by me, I don’t want to see them in the Fountain or Sandy Row, or the Bogside and other nationalist areas. “We need a change in the political landscape and no matter how much money you throw at it, the bonfires represent a fundamental belief, I wouldn’t object to more money coming into the Bogside but anyone who thinks it’s a solution is not living in the real world.” Wasteland He added: “Down at Meenan Square there is a particular problem, it’s a bit of a wasteland. Ironically the Flyover was built in order to break up the community so that nobody could barricade the Bogside again. “But in the process they created something of a wasteland either side of it, it is as bleak and as ugly a vista as there is anywhere in the North of Ireland. It’s an environmental scandal, when they designed that they had no thought that people would be living cheek by jowl with it who were entitled to a bit of beauty in their lives and not to be compressed by ugliness. “That’s not a reason for building bonfires but part of the reason why people feel that nobody cares about them and so forth. The Council recognised that bonfires can be regarded as expressions of culture and tradition. “Some want bonfires but others do not, while yet others wish to explore alternatives,” a spokesperson said. “Where there are bonfires they do need to be safe, clean and respectful to people of all backgrounds who live near and around them “There should be no tyres or other toxic material on any bonfire, and they should respect the health and well-being of all people. Similarly, we recognise that burning flags, emblems or any material that knowingly causes offence to others cannot be justified. This only damages community relations and impedes the already difficult process of peace building and reconciliation.” He concluded: “We are quite aware, despite progress in many areas there are still major issues around some bonfires. It is our commitment to continue to work with community and statutory partners to build on progress already made.”
ADVERTISEMENT - CONTINUE READING BELOW