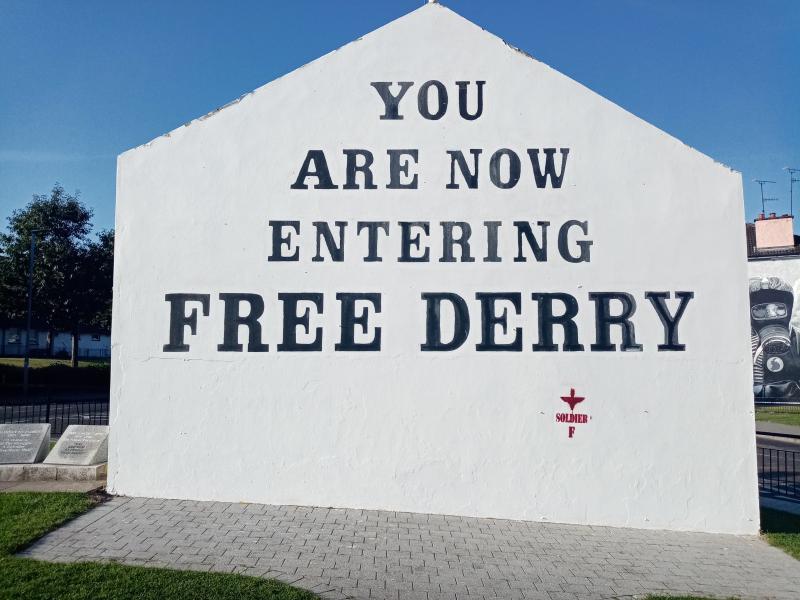 Graffiti painted on Free Derry Corner in support of Soldier F has been widely condemned with one Bloody Sunday relative saying he was “stunned”. The stencilled text sprayed in the heart of the Bogside with a Parachute Regiment logo above it was photographed by the Derry News on Friday morning just before two workmen appeared to paint over it. The stencil used to vandalise Free Derry Corner was also printed on a pensioner’s house on the Abercorn Road which had just been repainted as part of the ongoing £500k Abercorn Road improvement scheme. It marks an escalation in the campaign in support of the British soldier, who faces charges of murder and attempted murder on Bloody Sunday and, has been viewed as a clear act of provocation given its location. The erection of banners and flags as part of the soldier F campaign are said to have re-traumatised the Bloody Sunday families. Mickey McKinney, whose brother Willie was shot dead on Bloody Sunday, said he was "stunned" that someone would so brazenly enter the Bogside to carry out this act. “That’s come as a shock. The fact they’ve made their way into the Bog, I’m stunned. I wonder why someone would want to do that other than to provoke a reaction. “If these people are supporting soldier F I would like them to give some consideration to the fact that there have been no banners or no support for soldier F in the Shankill Road because the people there have also lost someone to the hands of this regiment.” On 5 January 1969 the words "You Are Now Entering Free Derry" were painted on the gable wall of a terraced house in the nationalist Bogside. The wall has now become an internationally recognised symbol of resistance. Independent Cllr for the Moor area, Gary Donnelly, said the incident is “very alarming” and an attempt to “stir up sectarian tensions” at this time of year. “There are sinister elements at work trying to engineer sectarianism. It’s designed to raise tensions and I would call on people to not react to sectarian attacks with further sectarianism. “People shouldn’t take the bait and give the people behind it what they want.” Meanwhile, Sinn Féin Foyle MLA Raymond McCartney said: “Whoever was behind this incident, all they were attempting to do was to cause hurt to the families of Bloody Sunday who have battled for 47 years for truth and justice. "It is also an insult to those in Belfast, including the Ballymurphy families and many others, who are still grieving the loss of loved ones at the hands of the British Army. “Thankfully the graffiti was quickly removed but unionist leaders should do more to avoid a repeat by ending their silence on these repeated and hurtful displays of support for a man facing multiple murder and attempted murder charges." DUP MLA Gary Middleton was contacted several times for comment but did not respond. On March 14 this year, the PPS announced that Soldier F would face the charges having considered the prosecution of 18 former soldiers and two former members of the Official IRA for their actions in the Bogside on January 30, 1972. The former member of the Parachute Regiment, known only as Soldier F is expected to be formally charged with two counts of murder in relation to James Wray and William McKinney. He will also face four counts of attempted murder in relation to the late Patrick O'Donnell and Michael Quinn, Joseph Friel and Joseph Mahon. The case of soldier F has been listed to appear at Derry Magistrate’s Court next month.
ADVERTISEMENT - CONTINUE READING BELOW