Air Ambulance tasked to 44 'traumatic' incidents in Derry and Strabane 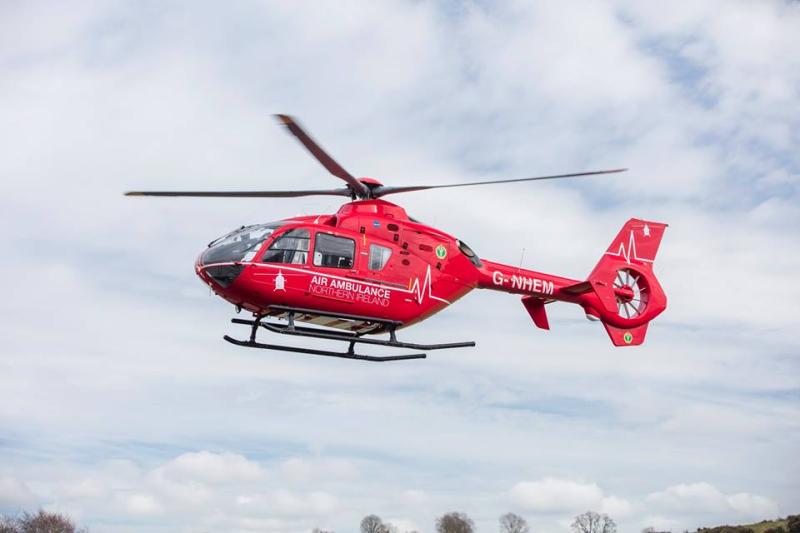 The Northern Ireland Air Ambulance has been tasked to Derry and Strabane forty-four times since its launch two years ago. This month marks two years since Air Ambulance Northern Ireland (AANI) first took to the skies and over that period the charity has responded to 931 medical emergencies in total. AANI is the local charity that provides the Helicopter Emergency Medical Service (HEMS) for Northern Ireland, together with partners at the Northern Ireland Ambulance Service (NIAS). The service operates seven days a week for 12 hours per day. Serious or life-threatening situations can happen to anyone at any time and on average, every single day in Northern Ireland, one individual finds themselves in desperate need of AANI. In April of this year, the Derry News reported that the Air Ambulance was deployed to a factory in the Strathfoyle area of the city where a male employee was involved in an “industrial incident”. Speaking about the second anniversary, Kerry Anderson, Head of Fundraising for AANI said: “Each time the helicopter lifts off we are aware that someone is in great need and that, thanks to the generosity of people locally, the HEMS team can offer the best chance of saving a life. “The air ambulance is there for any one of us and might one day save your life or that of a loved one. If we all do a little bit, we’ll ensure the service is maintained for today, tomorrow and future generations. “Becoming a Club AANI member provides an opportunity for individuals to be part of the journey and it was great to have 250 of our members to our base this month. We encourage those who can to sign up at www.airambulanceni.org.” Air Ambulance’s operational helicopter carries a crew compiling pilot, doctor, and paramedic, 365 days of the year operating for twelve hours every day. They attend some of the most traumatic medical incidents across the province and are dedicated to delivering the very best possible pre- hospital care, both at the scene and whilst transferring the patient to the most appropriate hospital for their specific injuries. Its EC135 helicopter can get anywhere in the province in approximately twenty-five to thirty minutes and the rapid response is vital in an emergency situation. From its base near Lisburn, the air ambulance can reach any part of Northern Ireland in approximately twenty-five minutes. Its primary role is to deliver advanced care, benefitting those whose lives are at serious risk following significant injury or trauma, by bringing urgent medical assistance directly to the patient at the scene. To find out more about the charity, how you can help fund a life-saving mission or make a donation, visit Air Ambulance Northern Ireland’s Facebook page, visit www.airambulanceni.org or call 028 9262 2677.
ADVERTISEMENT
Advertise with Us
ADVERTISEMENT
Advertise with Us
ADVERTISEMENT
Advertise with Us
ADVERTISEMENT
Advertise with Us