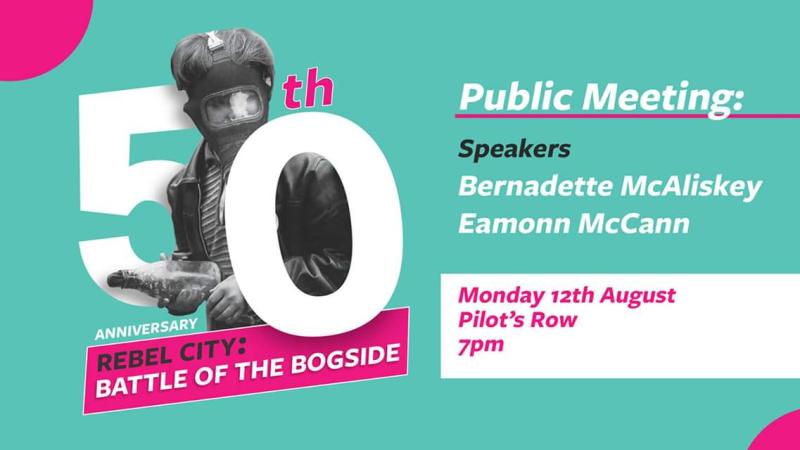 The Battle of the Bogside was a key moment in the history of Ireland, of the North and most of all of Derry.
In August 1969 the people of Derry responded to a brutal sectarian attack led by the RUC with heroic resistance. Following the October 5 1968 people power rising for Civil Rights ordinary people here once again led the way in standing up to injustice.
It was the moment when the British Army took over from the RUC as the first responders to any challenge to the Northern State.
The Free Derry period which followed represented the highest level of democracy we have ever known. The people themselves, not the constitutional authorities, much less armed groups, were in control - people power in action, long before the phrase became common.
This aspect of Derry’s political history will be the subject of a public meeting in Pilot's Row Community Centre on Monday at 7pm.
Bernadette McAliskey and Eamonn McCann, both of whom were involved in the events of August 1969 and later, will lead-off the discussion.
The meeting has been organised by the Civil Rights for the 21st Century Committee.
Eamonn McCann said “We are so used to defining our past solely by reference to Orange and Green hostilities that we can forget that it wasn’t always as stark or straightforward as this. Many of those involved in the Battle of the Bogside and then in leading positions within Free Derry wouldn’t have regarded themselves as Green at all, but as Reds of one sort and another.
“Also involved in the day-to-day business of Free Derry were around 50 ‘outsiders’ who had arrived to show solidarity with the Bogside. They came from Britain, the US, France, Germany etc. Most were students. They were accommodated in the changing room at Celtic Park and had their own representative on the Defence Committee.
“There are whole books about the period which have managed to miss these facets of the subject.
“Part of the point of the meeting will be to unearth this hidden part of our history, examine its significance and ask what lessons it holds for today.
"At the centre of this struggle is the role of ordinary people."
https://www.facebook.com/events/2408536412752299/?ti=cl
ADVERTISEMENT - CONTINUE READING BELOW