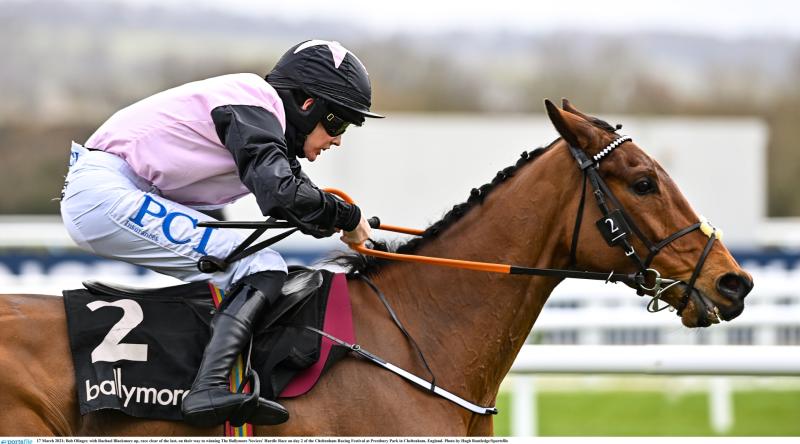 1.30 - TURNER'S NOVICES CHASE - This is a match between Galopin Des Champs and Bob Olinger, two Cheltenham winners over hurdles last season. I like both horses but I think Galopin Des Champs should have been sent to the longer race (Brown Advisory) on Wednesday. In this race, I think BOB OLINGER (6/5) is the one to be with. His jumping looked a lot sharper last time out when he was challenged by Capadanno for a long way before easing away. Looking at the form book, both Galopin Des Champs and Bob Olinger have beaten Gaillard Du Mesnil and Master McShee but Bob Olinger has beaten them both by further so I'm with him.

2.10 - PERTEMPS HANDICAP HURDLE - Sire Du Berlais is the favourite in this but he has to carry top weight and a ten-year-old hasn't won the age since 2011. I like a different horse from the Gordon Elliott yard in the shape of Dunboyne from right down at the bottom of the weights. He'll have Jack Kennedy onboard and has looked good in 3m handicaps. He was fifth behind Panda Boy on soft ground at Leopardstown but looks progressive and is still on a manageable mark at this distance. He will go on the ground as well as it gets heavier and heavier at Cheltenham.

2.50 - RYANAIR CHASE - ALLAHO (4/6) just wins this, plain and simple. He is Willie Mullins' own idea of a banker from his yard at Cheltenham. His only defeat since the beginning of 2021 came against Chacun Pour Soi at Punchestown at the end of last year but he was a dominant winner of this race 12 months ago, beating both Fakir D'Oudaries and subsequent King George winner Tornado Flyer. He is such a powerful horse and this is his ideal trip. It would take a special performance to beat him. Any number of his rivals have a chance eachway. The one I like that might chase him home is Janidil (14/1)

3.30 - STAYERS HURDLE - This is a cracking renewal of this race with the last three winners (Flooring Porter, Paisley Park and Lisnagar Oscar) all in the field. I tipped Flooring Porter at 16/1 in this preview last year and while I don't like abandoning him, his tendency for a misstep puts me off at his current skinny odds of 5/2 and on unforgiving ground. I like THYME HILL (9/2) after a rather good performance last time out finishing a close second to Champ at Ascot. He won't mind the ground and after missing the race last year, he could finally take that Stayer's crown. He was fourth in the 2020 Albert Bartlett behind Monkfish and has kept top class company ever since. He has beaten the 2019 winner of this race in two starts since, including Newbury's Long Distance Hurdle in November 2020. He's run just twice since then, including that eye-catching runner-up run behind Champ and when others are fading, this one will be staying on up the hill. He's proved that stamina over the last couple of years and is very rarely out of the frame.

4.10 - CHELTENHAM PLATE HANDICAP CHASE - This is a puzzle won last year by The Shunter and Ireland is well represented again with the likes of Hardline, Grand Paradis and Cavalry Master but I think it will stay in the UK with STOLEN SILVER (25/1) for Sam Thomas and jockey Sam Twiston-Davies. He has winning form on heavy ground, albeit over hurdles, but he has looked a good prospect over fences. This trip should be adequate for him but he will probably stay further in time. He was beaten more than 20 lengths by Edwardstone at Sandown but that one won the Arkle on Tuesday. The second that day, War Lord, was seven lenghts ahead of Stolen Silver and he too ran well on Tuesday, finishing a good fourth in the Arkle. In that, War Lord beat the 150-rated Riviere D'Etel while giving her seven pounds. That form line could put Stolen Silver at a mark in the high 140s so his mark here of 144 looks manageable. He was also a close second to Editeur Du Gite at this course late last year, and that reads well now after that one finished a good fourth in the Grand Annual (albeit over a shorter trip) carrying a big enough weight on Wednesday.

4.50 - MARES NOVICES' HURDLE - Dinoblue has been talked up at a lot of preview nights for Willie Mullins but it's too short for me at 2/1 in a very competitive race. She only has one run over hurdles, albeit a facile 15-length win, but it's not much to go on all the same. Willie Mullins has a good chunk of the runners here and it's one of his supporting cast I like here. GRANGEE (9/1) looks a solid eachway bet and is more experienced on track. She's won twice since winning her maiden hurdle at the first time of asking and although she fell last time out in a race won by Allegorie De Vassy, she was going well. Before that, she was just over four lengths behind Mighty Potter who is a good yardstick. Three Stripe Life, second in the Ballymore on Wednesday, was just three lengths in front of Grangee in the same race. This one also beat both Party Central and Brandy Love over a similar trip, albeit on the flat last year.

5.30 - KIM MUIR HANDICAP CHASE - I love MISTER FOGPATCHES (9/1) in this. He seems to always give his running and has the added benefit of top amateur Patrick Mullins on his back. He looked good in defeat behind the likes of Run Wild Fred and Braeside before Christmas and was a good third in the Thyestes at Gowran on his latest start. He carried just two pounds less than Diol Ker (fourth in same race) with just three-quarters of a length between them. Diol Ker franked that since by winning the Leinster National, as did Death Duty (seventh in the Thyestes). He finished sixth in the Ultima earlier this week after winning a Grand National trial before that at Punchestown in February.