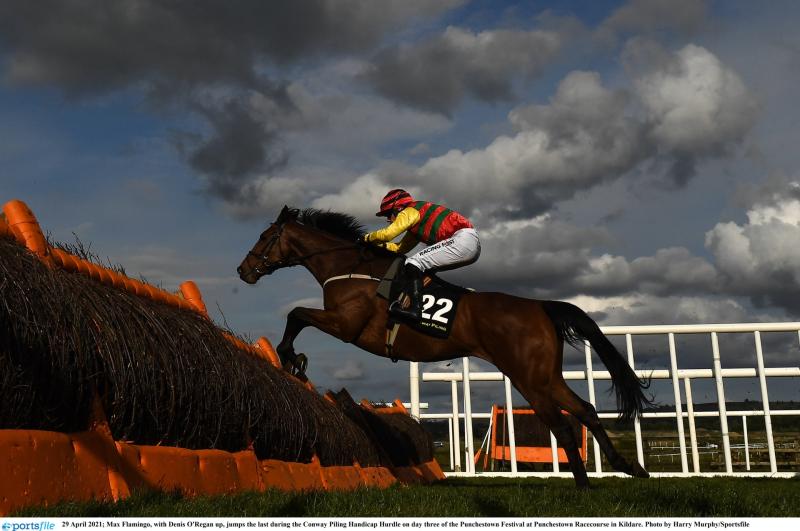 Leopardstown stages a seven-race National Hunt card on Sunday, with 73 horses declared and €128,000 in prize-money.

Racing gets underway at 1.55pm, with the seventh and final race at 5.20pm - bet on horse racing here.

The ground is Yielding, Good to Yielding in places on the Chase course - Yielding, Yielding to soft in places for the Hurdles.

Worth €45,000, the feature race of the afternoon is the extended two-mile five-furlong TRI Equestrian Handicap Chase (4.50pm) - a Grade B contest for five-year-olds plus, with 15 runners declared.

The ultra-consistent Winter Escape has only finished outside the top three once since the beginning of October, over an inadequate trip, and the 11-year-old ran well to finish third in a Grade A handicap over course and distance at last month’s Dublin Racing Festival.

Fellow JP McManus-owned runner, Donkey Years, was unlucky in-running at Thurles in January and looks on a tempting mark this time.

Fan De Blues finished a short-head behind Winter Escape on his last start, despite Paul Townend reporting him to be not right on the day. If his fall at the Dublin Racing Festival hasn’t affected him too much, then he should be right there at their business end.

Max Flamingo also unseated his rider in the Grade A contest, but ran fourth in a Grade One here in December and may appreciated this shorter trip.

Fakir D’alene was on a roll, before finding the top-class handicap too hot, and is worthy of an each-way shout.

Seven are declared for the two-mile one-furlong Irish Stallion Farms EBF Rated Novice Chase, due off at 4.15pm.

Fighting Fit returns fresh from a comfortable two-mile win at Naas over the New Year, and seems to have finally got things together over the bigger obstacles.

Bythesametoken, also a winner last time out, has shaped well in both beginner chases this season and this extra furlong looks likely to bring about further improvement.

Alice Avril carries 3lb less than when second to Fighting Fit at the beginning of January, but was perhaps disappointing when well-beaten by Bythesametoken towards the end of the month.

If settling better this time, Alko Rouge is not without a chance.

Making up the field of seven are; Ujumpthelastuwin, Kalkas, and One Down.

Over an extended two-mile-two, the 2.30pm Anton O’Toole Hurdle will see six runners head to post, including a recent Grade Three third.

Whiskey Sour finished behind Darasso in the Limestone Lad Hurdle at Naas on his last outing, as well as having ran creditably in two County Hurdles at the Cheltenham Festival, and the nine-year-old certainly brings class to the race.

Gallant John Joe has run in Graded races against the likes of Ferny Hollow and Bob Olinger this season, and will appreciate this ease in class.

Wolf Prince was unlucky to bump into Darver Star on New Year’s Eve and should suit this slightly shorter trip.