Bryony Frost excited by possible crack at Ultima onboard Frodon 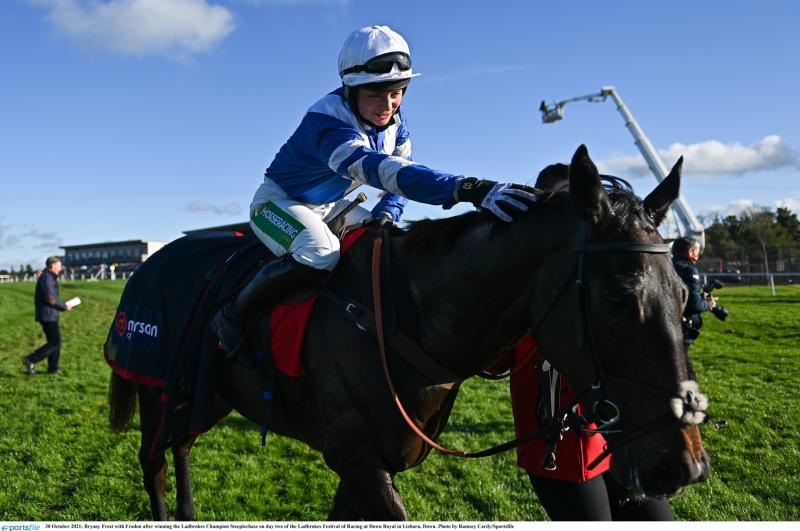 Bryony Frost could still ride her old favourite Frodon at Cheltenham despite the Paul Nicholls-trained chaser being ruled out of the Gold Cup and Ryanair Chase.

Byrony was quoted on Betfair this week with Frodon still a possibility for the Ultima on Day 1 of Cheltenham.

She said: "With just two weeks to go until Cheltenham, the excitement is ramping up everywhere I go, which is just as it should be.

"You can sense it at Ditcheat, where Paul Nicholls and the staff are starting to put the finishing touches to the team, and you sense it when you go racing too. Everyone's getting excited, including me.

"I don't know what I might be riding yet, but you probably saw last week that Paul surprised just about everyone by making an entry for Frodon in the Ultima Handicap Chase, having decided against either the Gold Cup or the Ryanair when the entries for the Grade 1s closed.

"Frodon is not confirmed yet and Paul will be waiting for him to tell us he's good to go, but the ground is starting to dry out now, which is a big plus where he's concerned, and the handicapper is giving him a chance as his mark of 164 is the same as when he won a decent race over the identical course and distance 16 months ago.

"That was the last time he ran in a handicap and it was very good form as he was giving nearly two stone to Cloth Cap, who finished only third but went on to win the Ladbrokes Trophy Chase at Newbury next time.

"As I said, it's just an option at the moment, but riding Frodon in the Ultima would be a fantastic way to start the best week of the year."

Looking to her rides this week she said Justified ticks boxes at Wincanton on Wednesday.

"On Wednesday, I ride Justified again for Neil King at Wincanton in the Visit racingtv.com Handicap Hurdle (16:50). It will be his first handicap over hurdles, but he won three of them on the Flat and I'd say his mark of 102 is workable.

"I thought Justified stayed on very strongly over two miles at Fakenham last time, and two miles and five furlongs on a nice flat track like Wincanton should suit him well, so he ticks a lot of boxes.

"Last week ended well for me when I won a novice hurdle at Hereford for Paul on Grace A Vous Enki. He's a half-brother to Yala Enki, and although he carries different colours they both race for members of the Hitchings family, who are enjoying a bit of friendly rivalry over the pair of them.

"I've got to know Yala Enki really well over the last few years and we've won four races together, including three Portman Cups at Taunton. They are very different, as Yala Enki is the sort who would burst into a room and let everyone know he'd arrived, whereas Grace A Vous Enki is more the shy retiring type, but both of them stay very well.

"Sunday's race, over an extended three miles on drying ground, was the perfect opportunity for Grace A Vous Enki to get his career over here under way.

"I should think Paul will find Grace A Vous Enki another hurdle race now, but he won twice over fences in France before he arrived and that's where his future lies.

"At Kempton the day before it was good to see Pic D'Ohry win the Pendil Novices' Chase for Paul, as it was his second Grade 2 novice chase of the season and the penny has really dropped with him now. He'd tended to be a bit novicey previously, but he's always had the engine and he was very good on Saturday.

"The same afternoon I rode Rubaud for Paul in the Adonis, as well as Lalor in the Coral Trophy Chase. Rubaud is like many who come through the gates at Ditcheat, in that he's a big, big type whose future will lie over fences.

"He got bumped down the back and lost a bit of confidence over his hurdles, so he was spending a bit too long in the air when they started quickening, but I wasn't discouraged at all. It was his first run in Britain and his first run over hurdles after winning on the Flat in France. He's a big frame and there's a lot of improvement in him.

"It was great to see my name against a Grade 1 winner like Lalor in the Coral Chase but the race just didn't go his way. Although it was three miles, which we thought would suit him, they went two-mile pace and the pressure was on him from the start. He didn't enjoy it, but I looked after him and I'm sure Paul will find a suitable opportunity for him before too long."