RACING: Tips and analysis for Sunday's card at Navan 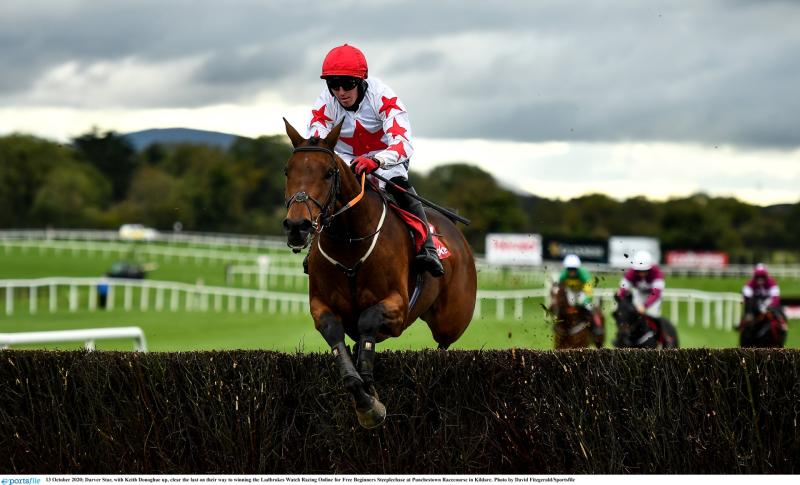 Darver star will be in action on Sunday PIC: Sportsfile

Navan hosts an eight-race National Hunt card on Sunday, with 130 horses declared and with over €90,000 in prize-money on offer.

Action gets underway at 1.10pm, with the last 5.15pm - find all the latest odds and tips at MyBettingSites.

The going description is Soft, Soft to Heavy in places, with up to 15mm of rain forecast ahead of racing.

The first of two Grade Two contests on the afternoon is the 2m 5f Boyne Hurdle (2.20pm) - with 14 declared to run.

Darver Star was a 20-length winner over 2m 3f on heavy ground at Punchestown on New Year’s Eve and his entry in the Stayers’ Hurdle at Cheltenham suggests connections are confident the former Champion Hurdle third will stay the longer trip. Darasso was soundly beaten by Darver Star in the premier two-mile hurdle race and he’ll have to carry 5lb more over this longer trip. However, he is in good form and his Lismullen Hurdle success came ahead of a few of these. Thedevilscoachman ran behind Ferny Hollow and Saint Sam in two recent chase starts and was a Listed winner over hurdles last term.

Only six are set to run in a small but smart Grade Two on the card, the three-mile Ten Up Novice Chase (4.05pm)

The consistent Run Wild Fred is currently a joint-favourite for the Grand National and put in a great winning performance while conceding weight in the Troytown, and also finished a clear second behind Fury Road in a Grade One last time. Another Gordon Elliott and Gigginstown runner in the race, Farouk D’Alene, was just beaten in a Grade One on his penultimate start and has since put in a decent effort to finish second in a three-mile Grade Three. Completing Gigginstown’s four runners is Beacon Edge - who won a Grade One in November, and finally Lieutenant Command. Braeside and Antey make up the sextet.

Lunar Display finished third in the Grade Three Solerina, and won a Listed event the time before and looks potentially the smartest of the seven runners. Brampton Belle won a maiden over the distance in December while 2m 7f in a Grade 2 last time was a stretch too far. This looks more realistic for Kenny Alexander’s six-year-old. Rock On Cassie ran well to win a maiden at the end of January, but the ground is very much an unknown. My Design broker her maiden at Fairyhouse last month and is the best of the rest. Must Be Obeyed, Broomfield Hall and Aillie Rose make up the seven runners.