Slip of the tongue earns dramatic victory at Punchestown 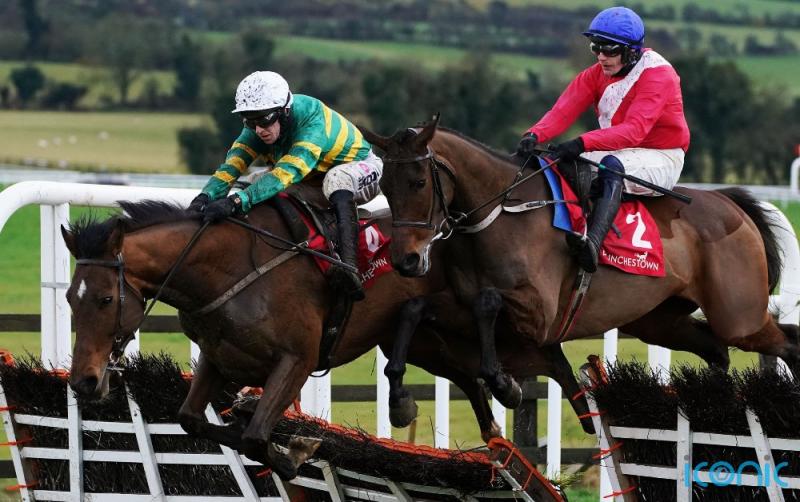 A dramatic victory win for Slip Of The Tongue who played a starring role in a Punchestown treble for jockey Mark Walsh and owner JP McManus in the INH Stallion Owners EBF Novice Hurdle this afternoon.

A winner on his hurdling debut at Tipperary last spring, the five-year-old had since had to make do with minor honours at Gowran Park and Limerick respectively.

But having finished third behind two potential Champion Hurdle contenders in Teahupoo and Quilixios over Christmas, Padraig Roche’s inmate was a 5-2 joint-favourite to claim Listed honours in Kildare.

Deploy The Getaway looked the most likely winner when scooting into a clear advantage leaving the back straight, but Slip Of The Tongue reeled him in on the run to the final flight.

Just when it looked like he was getting on top, the Flemensfirth gelding blundered badly, with Walsh doing well to keep the partnership intact.

Slip Of The Tongue regathered his momentum to get back on top by three-quarters of a length – and while the stewards held an inquiry due to the interference suffered by the runner-up, the placings remained unaltered.

Roche said: “That was great, he’s a lovely horse and it’ll keep the father (former rider and trainer Christy Roche) happy as he’s a home-bred. He’s a horse that we’ve liked all the time and he’s learning all the time.

“At Limerick the last day we didn’t learn much. I’d say he stays well and loves that bit of soft ground. Knowing the family, they get better with time and hopefully he will. He’s a fine, big horse.

“I haven’t discussed plans yet but I’d say we’ll keep him at home.”

The Walsh-McManus treble was initiated by Midnight Maestro (9-2), who edged out stablemate Shady Operator in the Hollywoodbets Bet 10 Get 30 PP Hogan Memorial Cross Country Chase.

Enda Bolger’s pair drew clear of the chasing pack from the home turn and it was Walsh’s mount who got the better of a thrilling duel by a neck.

“We’ll give them both an entry for the Cheltenham race now. Whether they’ll be good enough, we’ll see what else is going to turn up,” said Bolger.

“They just swapped it around from the last meeting here. Shady got a cut here the last day and was laid up for a while. He had a run at Navan but the other horse finished better that day.

“Maybe the little bit of fitness at the end probably caught Shady out. I thought for a minute he was coming back at him again.

“They were fine and professional about it and their jumping was good.”

Walsh and McManus doubled up with the Willie Mullins-trained Ciel De Niege (5-4 favourite), who comfortably made it three from three over fences in the Hollywoodbets Cheltenham Festival Preview March 3rd Rated Novice Chase.

Mullins said: “He did that nicely, coming back to two miles. It was just a pity about the two mistakes he made.

“I’m very happy he did that, he enjoys things more over fences.

“He’ll be entered in a couple of races (at Cheltenham) and maybe in a handicap as well. We’ll have a look at options after this and chat to connections to see where he fits in.”

Mullins made it a double on the day with James’s Gate (2-5 favourite) in the Hollywoodbets Money Back 2nd To SP Favourite (Pro/Am) INH Flat Race.

The five-year-old was making his racecourse bow in the hands of the trainer’s son Patrick, but he made short work of his rivals to run out an eight-length winner and set up a possible date in the Champion Bumper at next month’s Cheltenham Festival.

“He was bought from Pat Doyle, on his recommendation, and I’m very pleased for him as well. He looks as good as Pat thinks he is.

“I’d imagine he’ll go for the Cheltenham bumper and we’ll look forward to coming back here as well for the Festival bumper.”