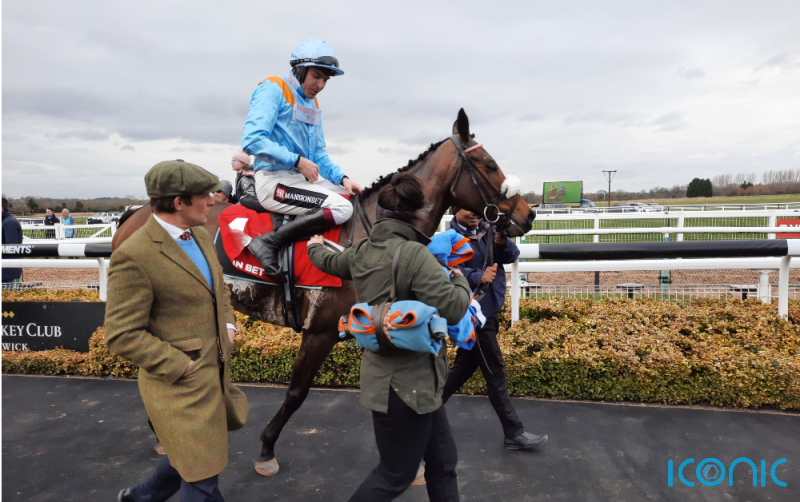 In a battling display to win the Virgin Mares Warwick Mares’ Hurdle, Marie’s Rock has booked her place at Cheltenham Festival.

The Nicky Henderson-trained mare showed an admirable attitude to outpoint Get A Tonic by three lengths under Aidan Coleman.

It was a well-deserved success following a luckless run in the Lanzarote Hurdle at Kempton when she was pulled up after being badly hampered at the second flight.

She will head for the Festival with the Mares’ Hurdle the likely target, though she could be given an entry in the Coral Cup.

“In the Lanzarote when you ride a horse for luck, it went against us. We felt we had a good chance going into that race. We have always rated this filly, but her career has been a bit stop-start,” said Tom Palin, of syndicate owners Middleham Park Racing.

“Her novice runs were very good, but then she went into the wilderness for a couple of years. But she showed great signs this year of coming back. Her Greatwood run was very good and it was no surprise to see her win at Kempton on Boxing Day.

“After the Lanzarote, this race was the stand out and it was good to see her come back like that and tough it out. Aidan gave her a great ride and she didn’t miss a beat. She stuck her neck out and battled for us, and answered every call.

“She is the mares’ at Cheltenham, but we’ll probably put a Coral entry in as well. We’ll talk to the trainer, but I would say she is likely to turn up in the mares’. She’s earned the right.”

Osprey Call (12-1) put his bad luck behind him when reverting to the smaller obstacles for the Virgin Bet Handicap Hurdle.

Alastair Ralph’s seven-year-old had fallen on his first two starts over hurdles this term before getting round over fences on his latest start.

The tactics paid off with Osprey Call getting the better of Dibble Decker by three-quarters of a length.

Ralph said: “We know the engine is there. He was unlucky at Newbury, Taunton wasn’t the nicest for him so we gave him a run over fences to respect his hurdles.

“Alex gets on well with him and a good strong two-mile gallop suited him. We’ll keep him over hurdles for the moment. We think there’s a bit of mileage in his mark. It was to get back on track today.”

Outsider of three Fair Frontieres (5-1) bounced back from a below-par run in a Grade Two contest at Sandown to win the Virgin Bet Novices’ Hurdle.

The seven-year-old was well beaten that day, but had earlier won by a wide margin at Worcester on his first run for Kim Bailey since leaving Declan Queally’s stable in Ireland.

He returned to form by making all the running in the hands of Jonathan Burke and had enough left to hold Earth Lord by a length and a quarter.

Burke said: “He had reasons for his poor run at Sandown. He was obviously very impressive at Worcester and he was good and honest today – very straightforward. When he needed to dig deep, he did.

“He was a much happier horse, in the past he over-raced whereas today he was the complete opposite – he idled. When I needed him to pick up, he did.”

He added: “He’s a smart horse, he jumps really well. He’s good, tough and honest and I would definitely forgive him for Sandown. He’s only going to progress.”

Burke completed a double on Gaelic Park to reach 50 winners in a season for the first time in the Virgin Bet Open National Hunt Flat Race.

Trainer Charlie Longsdon was delighted with the performance of the half-brother to Cheltenham Gold Cup hope Chantry House, and is looking forward to running over hurdles next season.

He said: “I want to go jumping with him, but February is the wrong time. It was a difficult one, but if you win you are in danger of losing your novice status.

“We ran in a bumper which is not his style. He’s an out-and-out galloper and has a very likeable attitude. He was unsold at the sales. We took him home and we liked him. He’ll go straight hurdling next season.”

Celebre D’Allen put his experience over fences in France when trained by Louisa Carberry to good use when taking the Virgin Bet Warwick Castle Handicap Chase for Philip Hobbs.

The Minehead handler wanted to see how he fared after winning two hurdle races this season and was pleased with what he saw, as Celebre D’Allen (5-2 favourite) jumped well in beating Wishing And Hoping by three-quarters of a length.

Hobbs said: “He did it well. I just thought for a second off the last bend maybe we were going to get stopped and get there on time but it was all right.

“I suppose hopefully he’ll run in the two-and-a-half-miler at Cheltenham, but we thought if we didn’t run him today he wasn’t going to get in.”

In Rem (7-4 favourite) completed a five-timer with a gutsy half-length verdict over Colonel Manderson in the Virgin Bet Fives Handicap Hurdle.

The seven-year-old has already gone up 33lb from when he started his winning sequence and is sure to get another rise.

Chester Williams, riding for his mother Jane, said: “He stated off on a low handicap mark and was always going to improve with time and the step up to three miles.”