Tips and analysis for Wednesday’s card at Fairyhouse 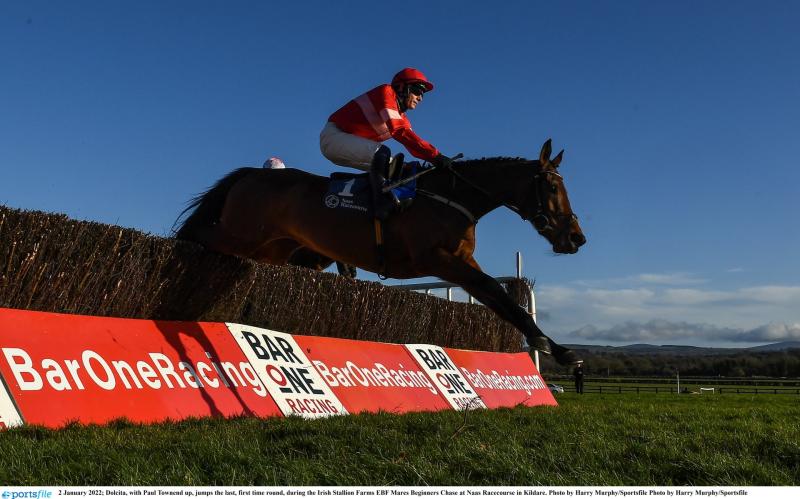 Dolcita is fancied in the opening race on Wednesday PIC: Sportsfile

Fairyhouse Racecourse hosts an eight-race National Hunt card on Wednesday - including a couple of valuable handicaps, with a total of 111 horses declared across the afternoon.

The first race gets underway at 12.45pm, with the last due off at 4.15pm - find odds and tips via MyBettingSites.

The going is currently described by the track as Soft - with 22mm of rain arriving since entries - and more rain is forecast throughout Tuesday, before drying up in time for racing.

The contest features Discorama and Defi Bleu who both boast placed form at the Cheltenham Festival. However, the Jessica Harrington-trained Discordantly brings the strongest form to the table. He finished a fine sixth in the Ultima Chase at the 2021 Cheltenham Festival and he shaped with promise when sixth in the Troytown on his seasonal debut at Navan in November. His fall in the Welsh Grand National was not an ideal prep - but he has been given plenty of time off since that effort and he could prove better than a mark of 138.

Glamorgan Duke has not been seen since pulling up at Naas in January last year, but looks well handicapped on previous form - which includes a third to Battleoverdoyen and Cap York. Jack Gilligan taking off another 7lb gives him over a stone in hand over the top two rated horses in the field and he gets also gets 10lb from Discordantly.

Others who warrant respect include Lord Lariat and Full Time Score who both boast course and distance winning form at the track. Smoking Gun represents Gordon Elliott who plundered the Irish Gold Cup at the Dublin Racing Festival and he is another live contender if rediscovering the form of his win at Fairyhouse on his penultimate start.

Earlier on the card, the Discover Meath Handicap Chase (1.15pm) sees 15 runners go to post. Both John Adams and Exit To The West look leading players in this event. The former won their last meeting by seven and a half-lengths and has to be respected despite a 9lb rise in the weights.

Samurai Cracker ran a good race in second at Fairyhouse in April last year and he found two miles too short when fourth on his latest start. He was also seventh in the Troytown on his penultimate run.

In the opening contest of the day, a Beginners Chase over two miles and five furlongs (12.45pm), Willie Mullins and Paul Townend look to have leading claims with Dolcita. Fifth in a Grade Two event behind stable companion Concertista on her chasing debut at Cork, she took another step forward when second to the classy Jeremys Flame over two miles and three furlongs at Naas in early January. Mullins has suggested that an extra couple of furlongs would suit and this trip could prove crucial to the seven-year-old opening her account over fences at the third time of asking.

Darren’s Hope finished behind Concertista in the Grade 2 Dawn Run Mares Novice Chase at Limerick over Christmas and has since finished fourth in a brace of Graded events at Thurles and Naas. Stepped up to three miles one furlong last time out, she failed to get home and is deeply respected dropping back down in trip here.

In the final race of the day, a handicap hurdle at 4.15pm, Dancing Jeremy is taken to defy an 8lb rise in the weights for Bryan and Thomas Cooper. A smooth winner at Cork last time out on heavy ground, he should be suited by testing conditions and is taken to land the finale.