People Before Profit 'Twenty is Plenty' campaign for Creggan Road 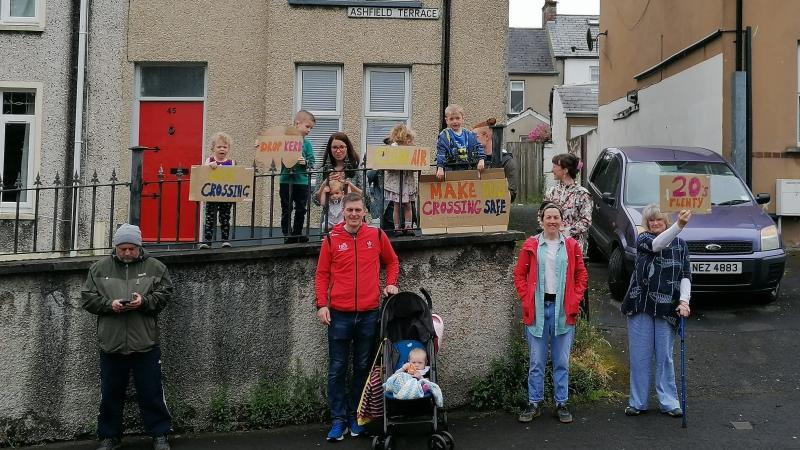 People Before Profit 'Twenty is Plenty' campaign for Creggan Road

Local residents and users of Brooke Park have staged a protest at Ashfield Terrace on Creggan Road in the city, calling for traffic calming measures in the neighbourhood.

It followed a successful meeting of community stakeholders, including Rosemount Primary School representatives, in Gwyn's Café in Brooke Park on Tuesday.

Speaking to Derry Now, Cllr O'Neill said Saturday's protest followed her motion to Derry City Council in May regarding concerns local people had raised with her about traffic in the area, poor air quality, and the crossing to Brooke Park.

She added: “Previous reports have shown that this area had a very poor air quality reading for PM 2.5 [Fine particulate matter (PM 2.5) is an air pollutant that is a concern for people's health when levels in air are high.]

“At the time, it was the bottom of Creggan Hill with Marlborough Street, and it had some of the worst readings in the UK for PM 2.5. Children are particularly vulnerable to PM 2.5. We know poor air quality is not good for our lungs.

“Why the area between Marlborough Road and Creggan Hill is so significant is because a lot of children and families, and older people as well use, that crossing to access Brooke Park, and Rosemount Primary School is also nearby.

“Really, the crossing is not a safe way to access Brooke Park because there is a dangerous road and also dangerous levels of air pollution too,” said Cllr O'Neill.

She said: “In addition, for anybody with a disability, or anyone with a pram, there is no ramp access. There is no drop kerb to get from one side of the street to the other.

“I would cross there often with my niece and nephew. One is in a pram and one is a toddler and you are taking your life in your hands. It is very, very dangerous. Families are attempting that all the time.

“In the short-term, our key demands include, a drop kerb and traffic calming measures such as 'Twenty is Plenty', which is in effect around a lot of school but not Rosemount Primary School. Maybe we need to be looking at introducing 'Twenty is Plenty' around parks as well. We also want air quality monitoring and a pedestrian crossing, speed ramps, potentially, and sign posting to alternative parking. These are all very practical short-term things which could be done, without looking at the whole issue of a car-dependent society,” said Cllr O'Neill.

Cllr O'Neill was hopeful Saturday's protest would allow residents to come together to highlight the issues, putting them higher up the agenda for Derry city and Strabane District Council and the Department for Infrastructure.

“Obviously following the motion that was passed, Council has been mandated to look at this issue and bring all of the stakeholders together, including the local community.