The Dungiven man has been a mainstay in the County for generations. 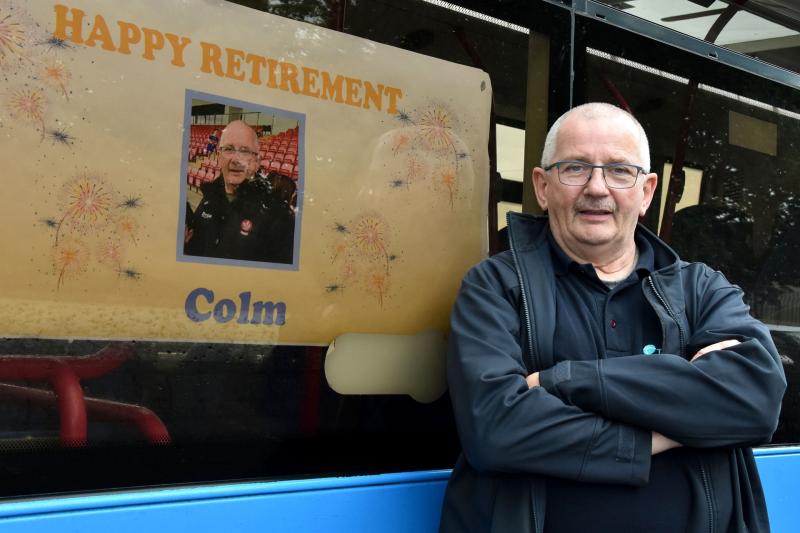 Setting off from Dungiven primary school heading towards the Benedy, the bus driver switches on his microphone and asks – “now boys and girls, what's the song we all sing?” That sets the tone for the short jaunt around the outlying rural areas of Dungiven with the legendary Colm 'Bandy' McGuigan who retired this week after driving buses for 35 years. The popular driver allowed Mary K Burke from the County Derry Post to join him on his last journey.

As Colm safely loads his young passengers onto the bus the chidlren's faces speak volumes to the fond regard that they hold for their navigator - “Hello Colm” was the universal cheery greeting as the kids all boarded the bus, smiling and waving to him on the way.

Colm McGuigan is a household name in County Derry. He is the 'kit man' for Derry GAA, as was his late father Jim McGuigan. Colm is known by generations of GAA people because of his involvement with Derry, but he is also widely known across the region as a school bus driver.

“Well, I started in 1987 in the Dungiven depot as a grade two driver, washing and cleaning busses. My first run was over the Glenshane Pass to Maghera school. That lasted eight weeks and then a vacancy came up in the Limavady depot and I applied for it right away and got it,” said Colm.

The landscape in County Derry in 1987 was a very different one from today's happy jaunt. Some terrible autrocities had be inflicted upon the North in 1987 including the bombing of the Rememberence Day event in Enniskillen and so Colm was acutely aware of the risks being a bus driver in that era.

“I started driving during the troubles alright and I always remember a bit of advice I got driving in the city, like in Derry there. If I was on the late run and there was someone hanging about the bus stop and it didn't look right just drive on and leave them. It was a different time then. 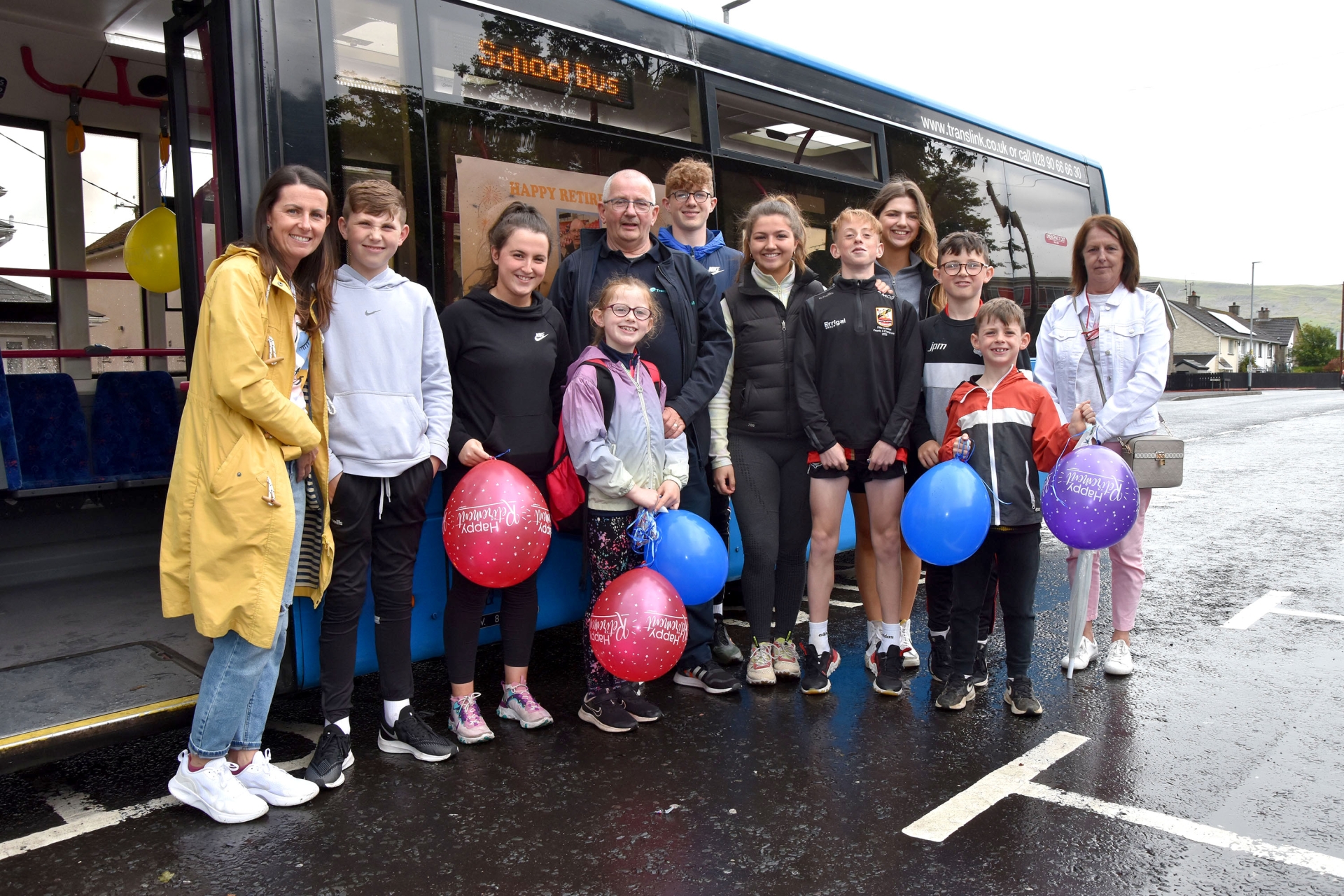 Colm McGuigan pictured centre with his wife Bernie, daughter Glenda and some of his grandchildren who joined him on his last bus-run around the Benedy on Wednesday. Pics by Mary K Burke

“Before peace times I suppose there would have been fear for some of the drivers on some of the routes but I was lucky now, I didn't really experience anything like that,” added Colm.

“There have been a lot of changes in the last 35 years. We have a lot of better busses on the road since when I started driving. They are a lot warmer. A lot cleaner. And I have to say the company look after you well so they do in when it comes to retirement.”

Colm went from full time driving to a part time role when he turned 55 years-old, before finally hanging up his boots this week,

“I was Shop Steward for a long time, and then when I turned 55 I got a wee offer for a part time job and a pension and I jumped at it right away because that brought me back into the Dungiven depot there, which is right across the road from my house.

“Now in fairness to the company they asked me what run I wanted when I was going part-time and God rest my mother and father were both still living at the time, in Maghera, and so I said I'd take the Maghera school run because it was handy if I wanted to nip in home every day,” added the driver. 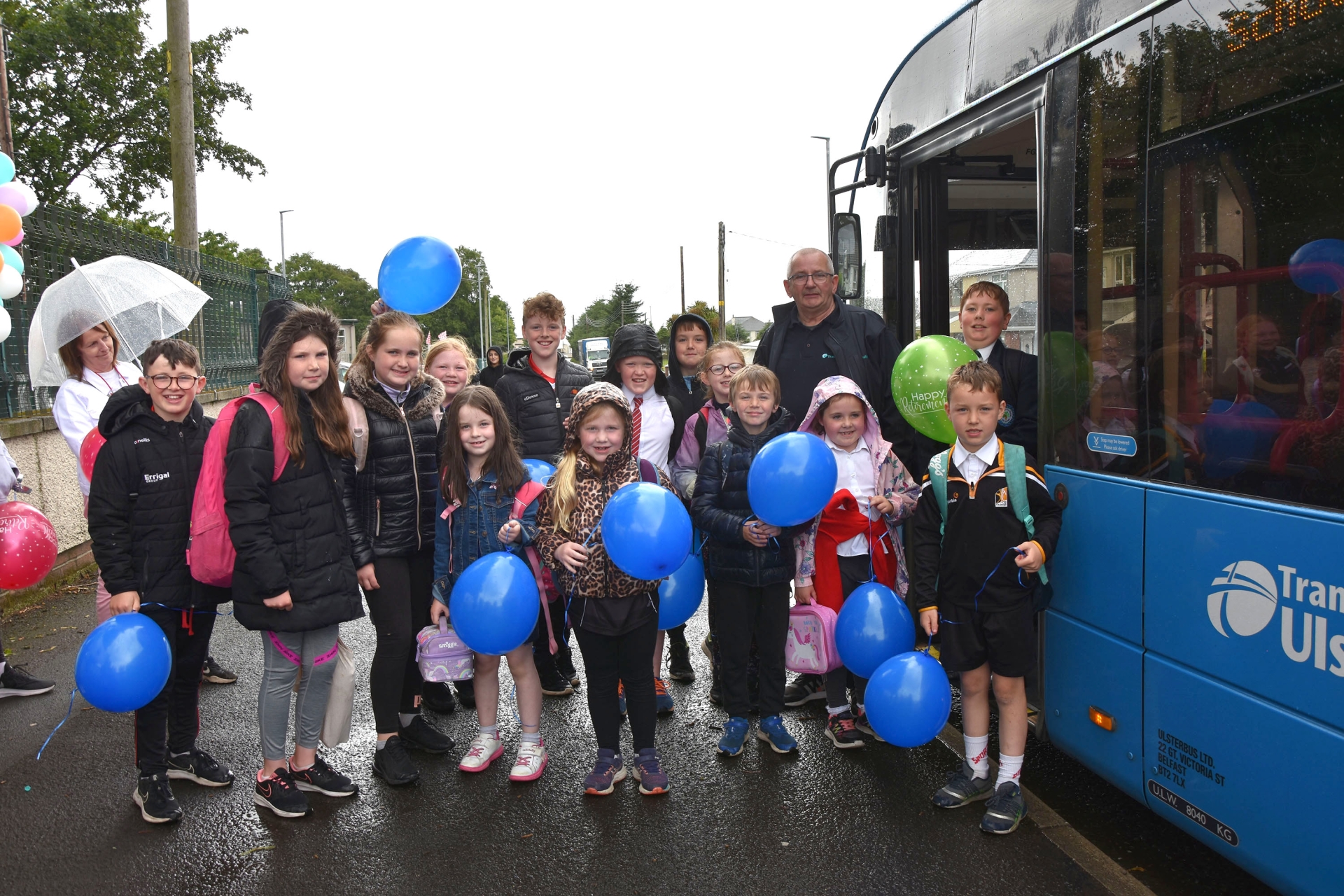 Colm McGuigan with the children of his last school bus run - from St. Canice's Primary School Dungiven to the Benedy. Pics by Mary K Burke

“I've been doing this week Benedy run we are on now for eleven years and I've seen quite a lot of local children grow up. That's the best part of it, you get to know all the children. You get to see their wee personalities.

“I have to say this Benedy school run is one of the best runs I've ever done in my lifetime as a bus driver. They are great children, well mannered - and you are well looked after when it comes to christmas,” he laughed heartily.

Added to the pleasure of having such good children on the route, Colm has got to see his own grandchildren every day as they live along the route and travel with him on the school run,

“Now it's been great, my own grand-children are on this route too and I've seen them every day, and got to watch them grow up in this job.”

Colm 'Bandy' McGuigan is a household name within County Derry.

One of Colm's former passengers Shéa Donaghy, felt so strongly about being there for Colm's last run that he asked for a half day from secondary school just to be on bus. He had travelled with him all through his primary school years and didn't want to miss the last outing,

“I used to go on this bus in primary school and I loved it. Colm is some craic. He is always on time and he would make us sing with him and we had great craic. I'll miss him surely but we will still see him out with Derry,” said Shéa.

Looking back over a 35 year career Colm didn't need to think too long about his greatest moment in his driving career,

“Ach I would say the biggest event as a bus driver for me was driving the open top bus everywhere it went when Derry won the All Ireland in 1993.

“I brought them into Moneymore, and I drove that bus up through Maghera street that famous night when Tony Scullion said it was 'bleck with people'.

“And I can tell you this now – if Derry were to win it again in 2022 I'll be driving that bus again! I'll still have my license to next May and so I'd be able to do it. If a driver is needed I'll throw my name in the hat anyway” laughed Colm.

The logistics of keeping an open top bus dry in County Derry where the weather in September can be less than predictable was quickly solved.

“I parked that open top bus up there in the Benedy, at Tommy Gerard McCloskey's house. He kept it for us in his big farm shed there. I remember asking Tommy Gerard and it was no bother at all.”

“It happened to be then all those years later that Glenda married Davy and now my grandchildren are Tommy Gerard's grandchildren.

“But I would say definitely that the biggest day in my career was driving that 1993 bus – I'll never forget it. I suppose many days since I've thought I'd never again in my lifetime get a chance to do something like that again.

In a county where it's residents like to identify as being from North or South Derry, Colm has stradled that invisible border at the Ponderosa well over his married life, and when asked was he a Maghera man living in Dungiven, or a Dungiven man born in Maghera he threw his head back laughing and replied “I'm both!” 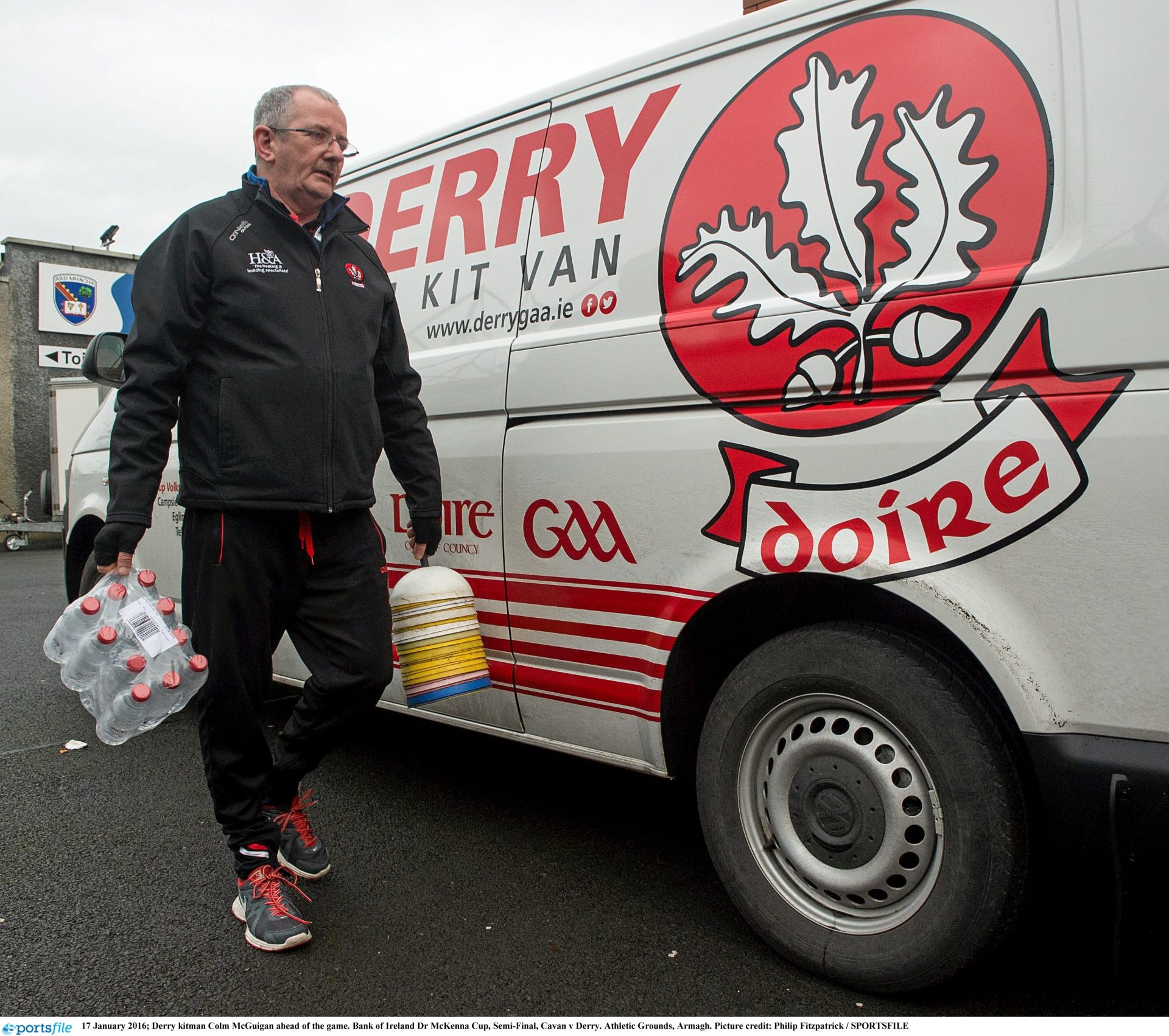 “Plans for my retirement? I've been made officially caretaker at Owenbeg now, so I'll be going out there. I've been doing it for the past two years more or less anyway.”

Colm won't be idle for long, and he has roped his loyal wife of 44 years Bernie to help Colm in his caretaking role, “Ach to be fair Bernie will give me a hand with it. As long as I'm healthy and able to do it sure I'm lucky.

“I'm really looking forward to retirement now. We have the club championships starting and that'll be a big thing. Hopefully I'll be able to help all the clubs in Derry in some way.

“But first I'm looking forward to a good holiday – we are heading away to Centre Parks with the family and grandchildren and that's the best of it now just being able to enjoy it.

“Colm has been a dedicated employee over the decades, providing a vital service to the community. We would like to thank him for his support and wish him all the very best for his retirement.”