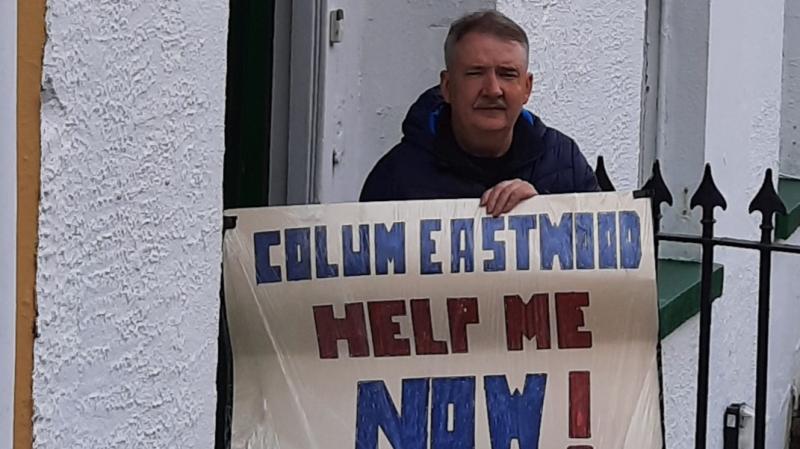 A Derry man's protest outside the Derry office of SDLP leader Colum Eastwood has highlighted deficiencies in the point system used by the Housing Executive (HE) to allocate homes.

Speaking to Derry Now, Mr Eastwood said the current point system was 'devoid of flexibility and struggles to adapt to the rapidly changing needs of applicants.'

Mr McMenamin revealed he had been fighting a five-year battle with the Housing Executive to be rehoused. He also believed he was being 'punished' by the HE for speaking out about his situation.

Mr McMenamin's complaint about the way he claimed he had been treated by the organisation in that time is currently the subject of an Ombudsman investigation.

Mr McMenamin added: “I was living in a beautiful two-bedroom Housing Executive house in Rossville Street for 18 years. We were a very settled community. However, in the winter of 2015, a young person was allocated the house next door to mine and it ended up a 'party house,' loud and noisy all the time.

“I was vulnerable at the time, following the death of my father, and I went into the house to complain about the noise one night. I ended up being assaulted and admitted to hospital. I reported the attack to both the Housing Executive and the PSNI. I also asked the Housing Executive to rehouse the person in question elsewhere.

“I, subsequently, moved out of my home in 2015 because the Housing Executive would not address the situation and I was afraid. Our whole street was tortured.

Due to his ill-health, Mr McMenamin said he needed a bungalow or a two-bedroom house.

“In addition, I have been supported by Helen Deery and Paul Fleming of NIACRO. I also got a lot of positive comments from passersby going up and down Great James Street last week.

“Why has the Housing Executive taken so long to house me? Did they expect me to stay in Rossville Street and live in fear? Live in danger?” he added.

Commenting on the case, Mr Eastwood said Mr McMenamin had been working with staff in the SDLP office, with the view to being placed in housing more appropriate to his needs.

Mr Eastwood added: “My office has worked with Mr McMenamin to ensure that he has the maximum number of points available to him under the current system.

“My office continues to work with Mr McMenamin regarding his case. Mr McMenamin has complex needs and the ongoing lack of suitable housing is compounding his difficulties. Given that Mr McMenamin went missing last year, we are very concerned about the impact of this situation on his mental health.

“My office has dealt with many cases involving housing across Derry City in my years as an elected representative and has seen how the current point system is devoid of flexibility and struggles to adapt to the rapidly changing needs of applicants.

“No one in this day and age should be left in this situation. Mr McMenamin is firmly of the belief that he is being discriminated against by the Housing Executive and has been overlooked for suitable properties suitable to his needs. He feels ignored and let down by the system as it currently operates,” said Mr Eastwood who confirmed he had contacted the Housing Executive again on Thursday calling for it to investigate the management of Mr Mc- Menamin’s case throughout the tenure of the application.

He added: “I would like the Housing Executive to ensure he can be located in a property that is suitable to his needs and location of his choice.”

Mr Eastwood concluded: “We are aware that Mr McMenamin’s case is cur- rently with the Ombudsman and are looking forward to reading their report.”