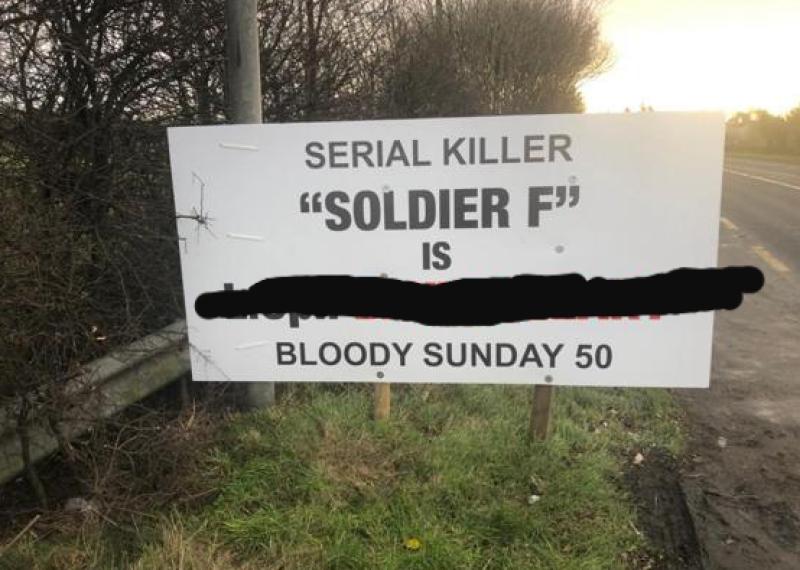 The British soldier, Soldier F, accused of murdering William McKinney and James Wray on Bloody Sunday has been named on a sign erected in Bridgend overnight.

The sign was erected the night before the 50th anniversary of Bloody Sunday, January 30, 1972, when British paratroopers shot 26 unarmed civilians, murdering 14, at a Northern Ireland Civil Rights Association (NICRA) rally against internment without trial, in Derry's Bogside.

In July 2021, Soldier F was also named during a debate in the British House of Commons on the controversial Armed Forces Bill, by SDLP leader Colm Eastwood, under parliamentary privilege.

One of the clauses in the bill is a proposed amnesty from prosecution for British State forces for any actions carried out during the 'troubles'.

At that time the soldier's name appeared on the Bogside's iconic Free Derry Corner and was widely known in Derry.

Soldier F is facing two murder charges over the killings of William McKinney and James Wray and five attempted murder charges for his actions on Bloody Sunday.

he was granted anonymity after the judge hearing the case concluded "a real risk does exist" to the life of Soldier F and he was right to "feel genuine fear".

The case is the subject on ongoing legal proceedings, which means Inish Live is prevented form naming Soldier F at this time.