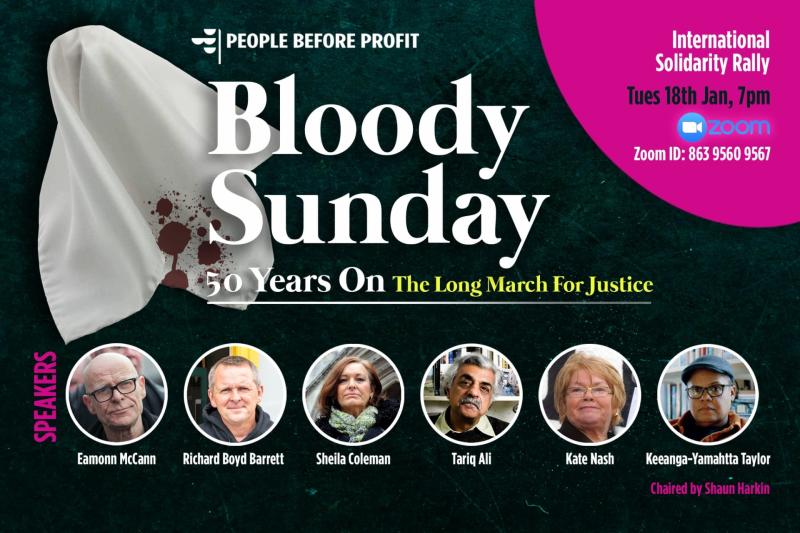 Tonight's online rally on Bloody Sunday, organised by the Derry branch of People Before Profit, starts tonight at 7pm

The Derry branch of People Before Profit are hosting an online rally tonight to mark the forthcoming 50th anniversary of Bloody Sunday.

On January 30, 1972, a Civil Rights march in Derry came to a horrific end when British soldiers from the Parachute Regiment opened fire upon the marchers, killing 14 people.

The rally will be chaired by Cllr Shaun Harkin with guests including, former Foyle MLA Eamonn McCann, campaigner and sister of Willie Nash who was killed on Bloody Sunday Kate Nash, the writer Tariq Ali, People Before Profit TD for Dún Laoghaire Richard Boyd Barrett, writer and activist Keeanga-Yamahtta Taylor and spokesperson for the Hillsborough Justice Campaign Sheila Coleman.

Cllr Harkin said: “The significance of the 50th anniversary of Bloody Sunday can't be understated. The British Army gunned down innocent people at a civil rights march in broad daylight in Derry on January 30, 1972. The parachute regiment was on a killing spree from Ballymurphy, to Derry and to the Shankill Road.

“Boris Johnson's attempt to block efforts to hold those responsible for Bloody Sunday and other injustices committed by the British state once again shows the complete disregard from the political establishment for the truth or for seeing anyone, especially those with high political and military rank, ever held to account. The statement 'one rule for elites and another for the rest' has never been so apt.

“The recent further revelations of collusion between security forces and loyalist death squads underpins again the rotten role of the British state here.

“Families and supporters bravely campaigned for decades to successfully overturn the lies of the official narrative of what happened on Bloody Sunday.

“The 50th anniversary of Bloody Sunday is an opportunity to commemorate and reflect on those who had their lives taken away, on those who lost loved ones and on the impact it had on politics and people's lives here.

“It is also a continuing struggle for justice and for accountability. Those with ultimate responsibility for Bloody Sunday, such as General Michael Jackson, went on to create further carnage here and internationally for decades.

“We need to keep a bright spotlight on the British state's role as a continuing sower of injustice across the world. Powerful governments never use military might to advance democracy or human rights. They use their power to do the opposite as we see here, in Afghanistan, in Iraq, Palestine or Yemen.

“We are encouraging support for all the events marking the 50th Anniversary of Bloody Sunday and for the march and rally on January 30.”