Donegal took the lead for the first time in stoppage time 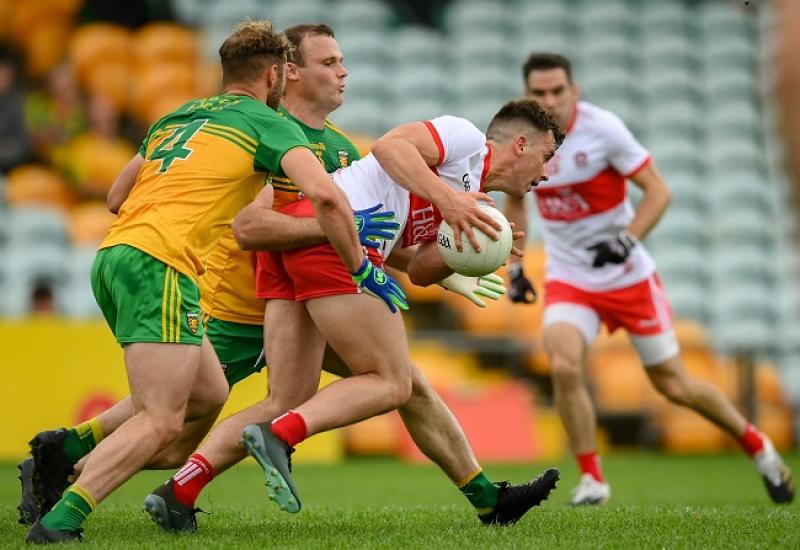 A point in the fourth minute of stoppage time from Patrick McBrearty sunk Derry in a pulsating finish in Ballybofey on Sunday afternoon.

It was a cruel blow on Derry skipper Chrissy McKaigue who had him under control for 73 minutes, only for the Kilcar man to find a yard of space in the pocket to land the knock-out blow.

Derry, who had earlier levelled the game from a Shane McGuigan free, had one more play but Donegal closed them into pass the ball outside the scoring zone before referee David Coldrick blew the final whistle before the Derry played out their attack.

The game started with McGuigan and McBrearty off-target with early chances, as both teams were sussing each other out in the early stages.

Benny Heron had a shot blocked by Donegal sweeper Hugh McFadden, while the ball pinged around the penalty area at the other end before Brendan Rogers pulled the ball clear.

Derry looked to have had a genuine penalty waved away after Shane McGuigan was upended in the box.

After two Niall O'Donnell wides, Donegal opened their account via Jamie Brennan before a monster Ciaran McFaul offer made it 0-3 to 0-1.

A McBrearty free cutting the gap to a point before Derry coasted into a four-point lead with scores from Glass, Padraig Cassidy and a McGuigan free.

Patton's kick-outs were a great outlet for Donegal and they edged their way back into the game. Michael Langan began to get space and his two points helped the home side back into the game at the break, 0-7 to 0-6.

Caolan McGonagle levelled matters early in the second half, but Derry were always able to find a way in front.  The arrival of Michael Murphy, Odhran Mac Niallais and Paul Brennan gave Declan Bonner's side an injection in the third quarter.

With Padraig Cassidy to the fore, Derry drove at Donegal and went into a four-point lead, 0-12 to 0-8, through Niall Loughlin, Emmett Bradley, Conor Doherty and Benny Heron

Donegal breathed a sigh of relief when a Heron palmed effort came off the underside of the bar.

In the final quarter, Donegal won the kick-out battle, with Patton going short and allowing the home side to build from deep.

Niall O'Donnell and Michael Langan were back level, 0-13 all, after 62 minutes. McFaul put Derry back in front and they had two chances to to push ahead but McGuigan was off target.

Odhran Mac Niallais won a free to allow McBrearty to put Donegal ahead for the first time in the 71st minute.

McGuigan levelled the game with the pressure kick before McBrearty flung over the winner.

Donegal will play Tyrone next Sunday in Brewster Park

Derry minors power their way to an All-Ireland Final spot