The Daffodils: How a kind and gentle Derry man used flowers to show his love for his wife 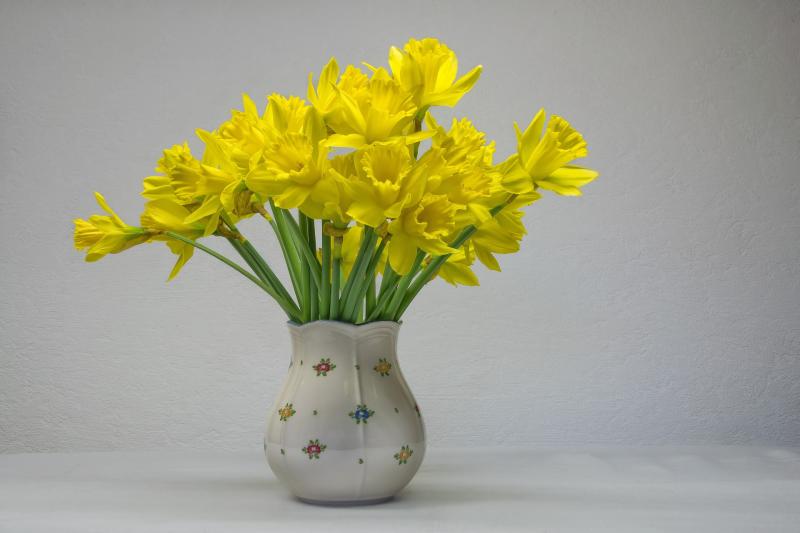 For some of us, the lockdown has become a form of imprisonment. For sure, it can be a challenge to ‘stay at home’ even if all the wise voices in our heads keep insisting that this is both the safest thing to do and the most generous - Stay at home, save lives, protect the NHS. For some of us the challenge of being ‘housebound’ has opened new doors of creativity. Since March/April last year, Top of the Hill man Eamonn O'Donnell has been trying his hand at creative writing, ‘giving it a go’. He’s not attending a class on Zoom, simply working away on his own steam at home where he’s been mostly shielding. During the current restrictions, Eamonn has written ‘The Daffodils’ a gentle loving story of family and neighbours. He hopes that this short hopeful story will give the reader a lift especially as we turn towards spring and await our turn for the vaccine.

Bunches of daffodils wrapped with kindness remind me of me Da.

Just after he retired from his job as a bar manager, rather than exist on the pension, he took a job as a lollipop man and was positioned up in Irish Street outside of Clondermott School.

He was a decent, respectful independent, principled man who took this position in order to maintain his dignity and continue to be a provider for his family.

A proud man with a sound work ethic, he never wanted to live off state benefits and wanted to make his own way in life as long as he was fit to do so.

He was a very straight man, a kind and gentle soul who lived his life for his family.

Daddy always kept himself to himself, never bothered no one and minded his own business.

Not long after he became the lollipop man at ‘Clon’ an old friend from the Top Of The Hill, Jordie Walker was dropping one of his daughters into school and stopped and chatted to my father whom he was delighted to see again.

The Walkers had a small farmyard in Strabane old Road where they milked their herd of cattle and kept them safe during winter.

They were a good respectable Protestant family and knew my father well.

However, when the Troubles commenced the Walker’s barn was burned and their family had to move out of the area like all the other local Protestants, for their own safety.

Jordie Walker moved out with his young family to Goshaden and there purchased a few fields on which he grew daffodils to sell on the market.

My father had not seen Jordie in years and had always spoke very highly of him so he was delighted with getting this catch-up with his old friend and neighbour.

A few days later Jordie’s daughter, on her way into school, presented my father with a large bunch of freshly picked daffodils.

This act of appreciation and kindness continued at regular intervals during each spring.

Daddy being a quiet unassuming man, ‘a bit odd’ as my Ma would say, accepted these expressions of kindness but hated carrying the daffodils home.

He didn’t want to be seen carrying them over the full length of Anderson Crescent where he would be self-conscious and expected all eyes would have been upon him.

He also tried to avoid all other pedestrians in order to dodge their conversation bullets, or to be labelled as a romantic.

His relief at getting into the house with daffodils intact soon passed into insignificance when mother's delight shone brighter than the sun.

She loved flowers and could not contain her excitement at the unexpected arrival of the daffodils. She was in awe at their beauty.

Being a perfectionist she soon produced her best glass vase, filled it with water, trimmed the daffodils to appropriate lengths to enhance their arrangement and centred the display on our kitchen window sill, giving them pride of place.

When content after a few slight adjustments, having worked her magic, she stood back and gave the daffodils their moment to shine.

She was all made up and as pleased as punch.

Those daffodils brought mother so much joy and she shared her joy with anyone who came into our house: “What do you think of my lovely daffodils?”

The story of the kindness of that good man Walker who gave us the daffodils was then told to all who entered the house and how those lovely daffodils made our house a home.

Mammy’s life became a lot brighter and richer when the daffodils were there and they brought her so much joy.

Recently I found a framed copy of Wordsworth ode to the daffodils and I hung on the wall just as you come into my front door.

When I go out to work in the mornings, I read the poem and it fills me with joy and lightens my day … just like Jordie Walker’s daffodils did for mammy.