The founding of a bank with a heart: Derry Credit Union through the decades - the new beginnings of the 2000s 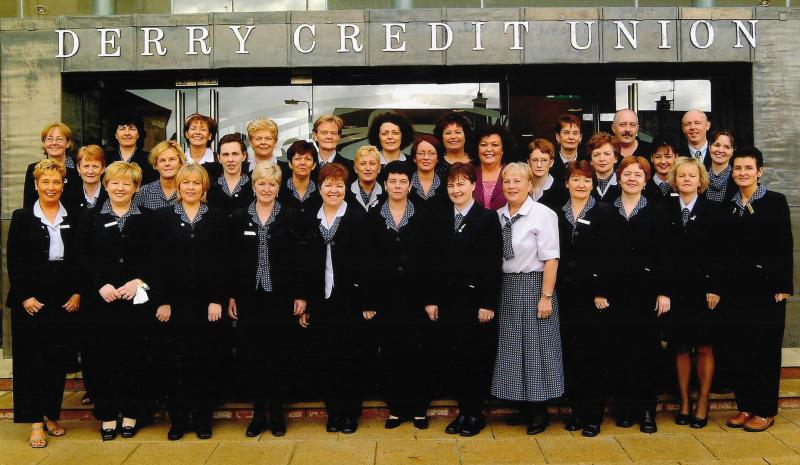 Staff pictured outside the new Derry Credit Union building in 2001.

Throughout Derry Credit Union’s sixty years, each decade has introduced a range of changes and developments geared towards improving services to its members.

The decade that began with the turn of the new millennium was no different.

This was the decade Derry Credit Union’s loan book broke the £40m mark, shares grew to £70m, and membership reached 30,000.

In many ways, it was the decade of new beginnings.

It was the decade that saw the introduction of new services and products, a focus on engaging with youth and the wider community, and the decade when the credit union turned the magnifying glass on itself and took stock of where it was performing well and where there was room for improvement.

The year 2000 began with a bang across the world, and for the volunteers and staff of Derry Credit Union.

The celebrations culminated with a gala dinner at which founder members Paddy and Eileen Doherty were presented with a portrait from Jim McMahon, President of the Irish League of Credit Unions.

Amidst the celebrations, there was disruption as the credit union’s operations moved to temporary premises at Waterloo Place to allow for the complete refurbishment of the offices on Abbey Street.

Staff recall the upheaval with good humour and agreed that the disruption was worth it when the doors opened on the new, state-of-the-art premises.

The newly-refurbished building, which was officially opened on 20 October, 2001, by Gerry Foley, the President of the World Council of Credit Unions, delighted both staff and members alike with its modern, spacious layout and design. 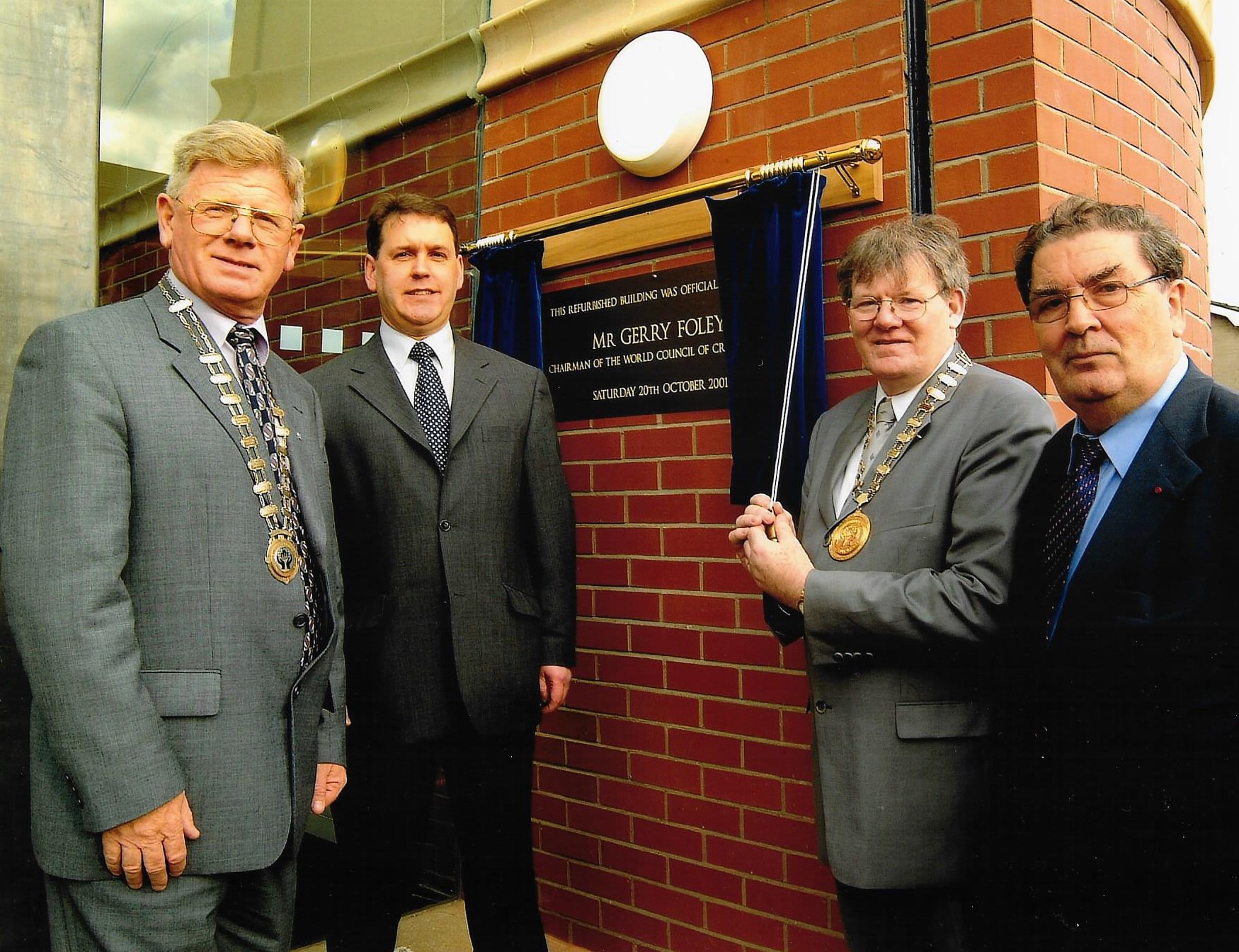 The new layout provided privacy for members applying for loans and an efficient service for those who were stopping by to make lodgements and repayments.

The clean, modern lines and exceptional finish have withstood the test of time, for other than periodic coats of paint, the building is essentially the same as it was twenty years ago.

The pieces by artists Marie Barrett and Louise O’Boyle were unveiled in 2003.

The first of the installations consists of four hanging glass panels, each with a sandblasted design based on the map of Derry.

The second of the artworks is a collection of framed photographs, mementos and artefacts commemorating the city and the credit union, which is on permanent display in the credit union’s building.

A significant piece of work occurred in 2003 when Price Waterhouse Cooper was commissioned to conduct a comprehensive members survey.

The results of the survey largely guided the credit union’s work for the rest of the decade, ensuring that it met the needs and wants of members.

1,101 members were selected at random and asked a range of questions, such as why they joined the credit union; how satisfied they were with staff and the manner in which their accounts were handled; what they thought of the credit union’s building and access to services; additional services they would like to be offered; and areas for improvement.

Many of the findings were complimentary.

Member loyalty became apparent as only 4% of those polled had borrowed from sources other than the credit union.

There was also a strong commitment from the membership to the credit union ethos in terms of the common bond, the local community aspect, and the voluntary nature of the credit union.

However, while PWC’s report concluded that there was ‘clearly a strong emphasis on quality within DCU,’ the survey revealed some key areas of improvement which Derry Credit Union subsequently addressed.

In response to the survey findings, the credit union trained staff on a cross-department basis so they could be redeployed from one department to another if and when queues began to build.

Privacy in the loans department was enhanced with the addition of sound-proofing measures.

This new position, the first of its kind on the island of Ireland, was designed to ensure staff and officers were knowledgeable about the credit union ethos, principles, policies and procedures, and were upskilled in member service and methods of communication.

She embarked on a round of outreach talks and launched the school savings programme which is ongoing today, and, along with director Joe Molloy, she addressed new members and their proposers or seconders at the monthly new members meetings.

A range of disability-friendly adaptations were made to the new building to ensure that all members have equality of access.

New products and services were introduced throughout the decade.

Today’s members who find the interest rate rebate one of the most appealing aspects of credit union loans, may be surprised to learn that the rebate was introduced for the first time in 2001.

The initial proponent of the rebate, director and credit committee member Phil O’Doherty, believed that introducing a rebate to borrowers was only equitable since borrowing members generated the majority of income that provided the other services and benefits of membership.

Following Phil’s passing, director and credit committee member John Dunnion carried the mantle until the rebate was implemented for the first time in 2001.

The popularity of Phone A Loan spurred on the introduction of the online loan application service which began soon afterward.

A new class of loan, the PLuSS Loan was introduced, offering eligible members a new loan with a lower APR.

A new sub-account, similar in many respects to a current account, was introduced: The Easy Shares Account.

A new ATM, the first of its kind in the local area, was installed for the convenience of members and local residents.

In 2003, the credit union looked to both the past and the future.

It embarked upon a Living History Project which saw 55 individuals, ranging from the founding members to current staff, interviewed by the Education and Training Officer and captured on video.

The video tapes were subsequently transferred onto dvd’s, creating a visual and audio record now kept in the credit union’s archive.

The credit union also looked to the future as young people took front and centre.

Derry Credit Union made a concerted effort to reach its younger members and potential young members by spreading the benefits of credit union at school outreach talks, with its school savings schemes, and via a re-energised Derry Credit Union Youth Committee designed to prepare the future leaders of the credit union movement.

Mirroring the credit union’s board of directors, the youth committee members gained valuable committee and leadership skills while organising and helping to deliver key credit union events such as the annual art competition and schools quiz.

Over the past sixteen years, more than 800 local young people have been nominated for awards across seven categories.

The scheme has been emulated by credit unions across the island and is seen as a key form of local community engagement.

As was the case in previous decades, Derry Credit Union’s influence extended beyond the city. Volunteers and staff participated in regional and national credit union bodies.

In 2005, director Sean Mullan was awarded membership in the ILCU Roll of Honour.

The next year, director Rosemary O’Doherty, who was following in the footsteps of her late father Phil O’Doherty, was elected to the ILCU Board of Directors.

In 2009, General Manager Joan Gallagher was chosen to be part of an international delegation of credit union technicians who travelled to Ghana to provide support to local credit unions.

In addition to meeting local credit union leaders and soaking up the Ghanian culture, a highlight of her time there was presenting GAA kits, donated by the boards of the County Derry and County Fermanagh (Joan’s home county) teams who met that year in the Ulster Championship, to local children. 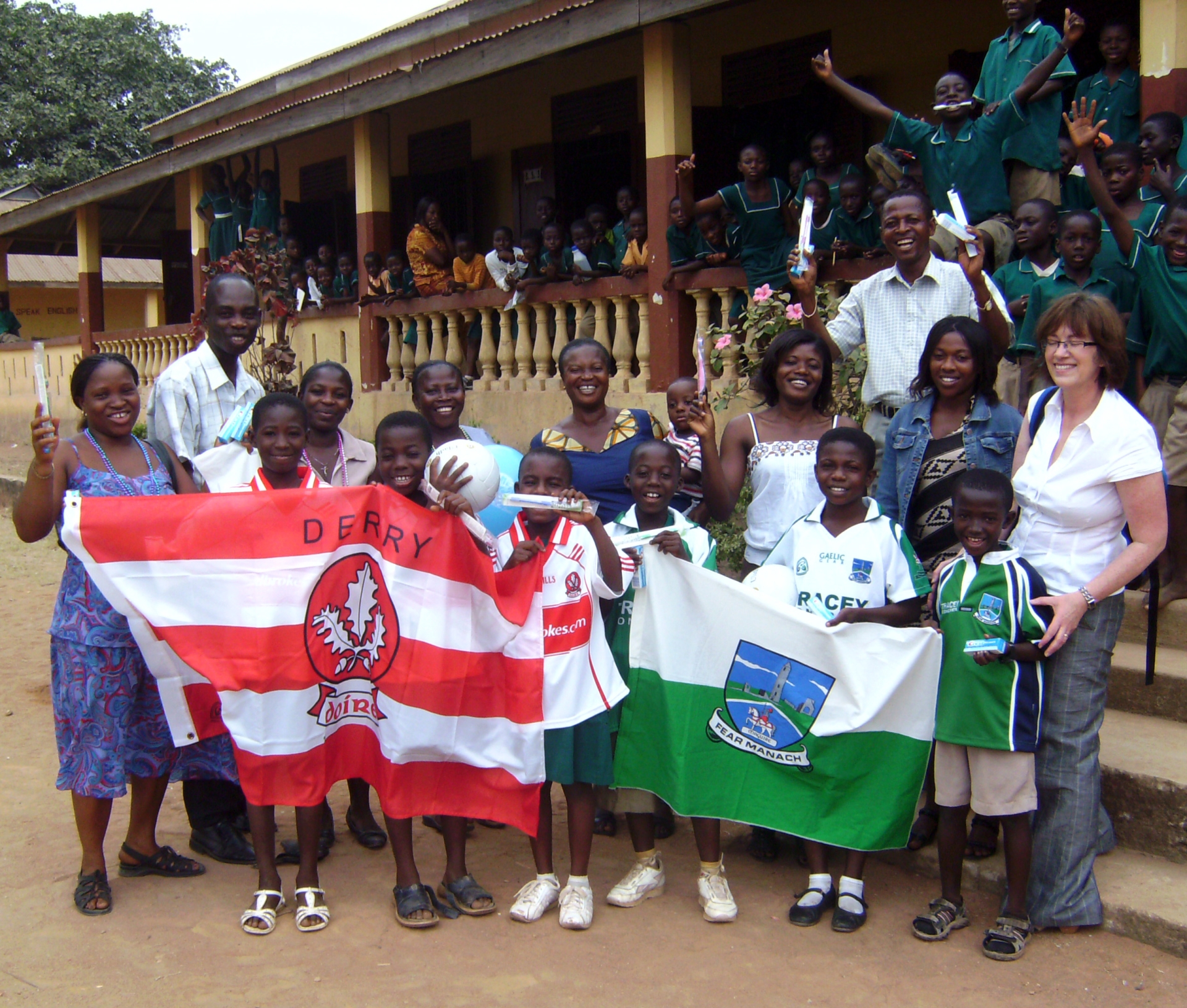 The links she forged on that once in a lifetime trip were further strengthened when Ghanian credit union personnel visited Derry Credit Union in May of that year.

At that year’s AGM, Joan made a presentation of her experiences to those in attendance which was enthusiastically received.

The directors who served Derry Credit Union during the decade were John O’Connor, Aidan Gallagher, Margaret Logue, and the late Jim Travers.

The end of the decade was marked in many respects by the global economic downturn that began in 2008.

But whilst many banks and other financial institutions struggled and relied upon government bailouts, the credit union movement, and Derry Credit Union in particular, weathered the storm.

The sustainability and strength of the movement rested with its loyal members who continued to borrow, save and invest in their local community.

In fact, perhaps because of the economic conditions under which the credit union was founded in 1960, the board, staff and members of Derry Credit Union continued to support it with confidence.

As the decade ended, staff and volunteers alike were looking forward to the next big event in the credit union’s history: its 50th anniversary to occur in 2010.