The lifeline provided by volunteers in Derry during the coronavirus pandemic

Local communities reach out to each other during crisis 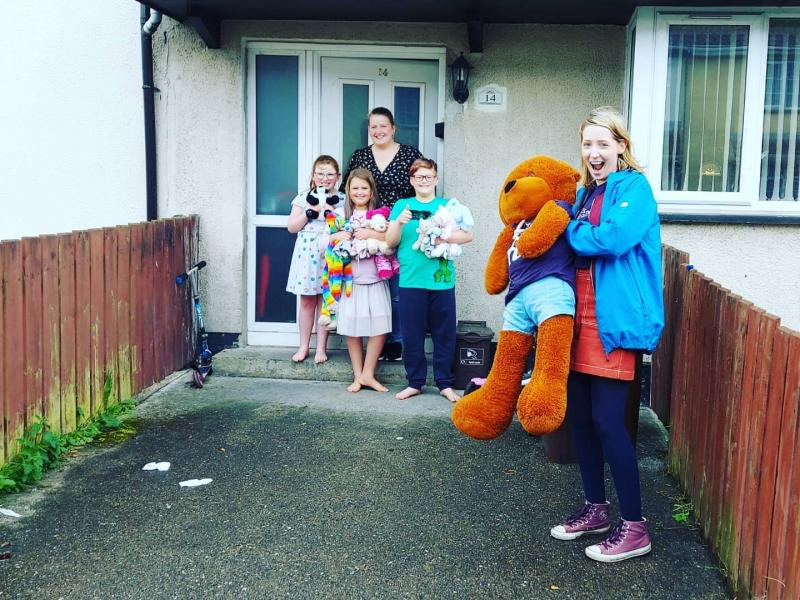 The teddy bears picnic was a big success last week.

Last week over 700 Teddy Bears Picnic packs were distributed to local children across the Moor District Electoral Area, just one example of a wide array of creative and essential services being delivered to people of all ages in community areas in the response to COVID-19.

The picnic would not have been possible without the help of a dedicated team of volunteers who are working within the Community and Voluntary sector to help meet the needs of the most vulnerable members of local communities, including those shielding due to serious health concerns.

Over 150 local people have stepped up to volunteer their time helping others since the crisis began – work that will be celebrated during Volunteers Week this week, June 1st-7th.

Without their help, the efficient and effective programme of community support currently being delivered across Derry and Strabane simply wouldn't have been possible, according to Strategy Manager with Triax Neighbourhood Partnership Charles Lamberton.

The group is leading on the community response in the Moor DEA, covering the Bogside, Brandywell, Creggan, Fountain, Bishop St, Nixons Corner and Sheriffs Mountain areas, and the response has been unprecedented as Charles explained.

"We're currently delivering 800 food boxes to people with no access to food, so we have between 60-70 volunteers out on the ground assisting the Department for Communities with the distribution of food aid.

"Logistically it has been a challenge to coordinate the distribution while adhering to the social distancing guidelines, we've had to navigate around the obstacles of working in restricted spaces, managing teams of people and dividing up the areas.

"This work would have been impossible without the support of Volunteer Improvement Project, Triax Neighbourhood Management Team and CRJI.

"This is only one element of the effort though, lots of groups in the area are delivering activities to keep people's spirits up, promoting health and fitness and mental health and wellbeing during this difficult time.

"The Teddy Bears' Picnic was fantastic a creative partnership between Feile, Peace Walls Project and Triax Neighbourhood Management Team we had over 700 activity packs delivered to children so they could take part in the event in their own homes and gardens – and it wouldn't have been possible without the help of our volunteers.

"An example of ingenuity  has been the outdoor exercise cases – the classes started in Creggan and have now spread right across the city. We're very conscious that people are finding isolation very difficult and local groups have been finding new ways to bring people together."

Volunteering has not only provided a lifeline to those receiving services but also those involved in helping others, according to Charles.

"Lots of families are working together to assist - neighbours are helping neighbours, and some people who had been a bit cut off have reconnected with their local community. I have to say that personally I look forward to getting out and about and playing a part and feeling that I have a role in the response, my wife and daughter also volunteer.

"We're also lucky in that we have some amazing resources right on our own doorstep. For example Creggan Country Park, where the fisheries have just reopened and people can fish in a safe and open environment.

"During this crisis the community spirit has really shone through – the community has taken a cohesive and connected approach from the very beginning. We need to take the positives from this situation, to appreciate the goodwill and kindness that has been demonstrated on so many levels. We need to ensure this continues after things begin to return to normal and that we learn a lot from this experience as custodians of our own communities."

Among the many creative projects to have sprung up in recent weeks is the troupe of intrepid Super Heroes who have gone to infinity and beyond to bring smiles to the faces of children across the city. What began as 'Superhero Week' has now run into its sixth week, with many miles covered by the volunteers who have brought Disney to the streets of Derry.

Jenny McConnell is one of the volunteers involved, and her regular appearances as Frozen's Elsa have been warming the hearts of young and old throughout the pandemic. She has been volunteering since she was 14 and explained why volunteering is so important to local communities.

"I've always been involved in local youth groups with my friends. I first joined a youth group in the Outer West area, then I joined the Glen Development Initiative with my friends, before we went on to the Rosemount Youth Club. I've always enjoyed the activities and the opportunity to meet new people. We started to get involved in helping with the local summer schemes and after schools clubs, so that was my first introduction to volunteering.

"When we were told about the Super Heroes Week we were delighted to be part of it and to bring some fun back to the streets during what has been such a traumatic time for everyone. Initially it was supposed to run for one week but there was such an amazing response that we were asked to visit lots of community areas. We've been everywhere - the Waterside, Creggan, the Bogside – I think we just have one more area left to cover."

And the adults have been just as enthralled as the younger Super Hero fans according to Jenny.

"What's been lovely is that it's not just the children who enjoy it – the parents and grandparents have loved it was well – and we've helped people to stay connected while still social distancing. It's been a real privilege – although there have been sore feet on some days with the number of streets we've covered.

"I can't imagine a time when I won't want to volunteer. It's really brought me out of my comfort zone, helped me to develop confidence and meet new people. I'm 18 now and I'm currently studying at the Tech – online at the minute. Volunteering has provided an opportunity to stay connected during lockdown, I would recommend it to anyone. I've been so proud to be able to play some small part in helping others."

This week Council's main building on Strand Road in Derry and the Tinnies sculpture in Strabane will be illuminated in recognition of Volunteers Week from June 1-7, to reflect the City and District's support of the volunteering effort.

The local campaign is being led by the North West Volunteer Centre which is core funded by the Department of Communities under the Volunteer Infrastructure Support Programme and also receives funding from Derry and Strabane District Council's Grant Aid Programme.

To find out more about NWVC and the volunteering opportunities available go to https://www.volunteeringnorthwest.co.uk/