"It would take a lot more than that to put me off coming to Derry", says man who was attacked in the city last month 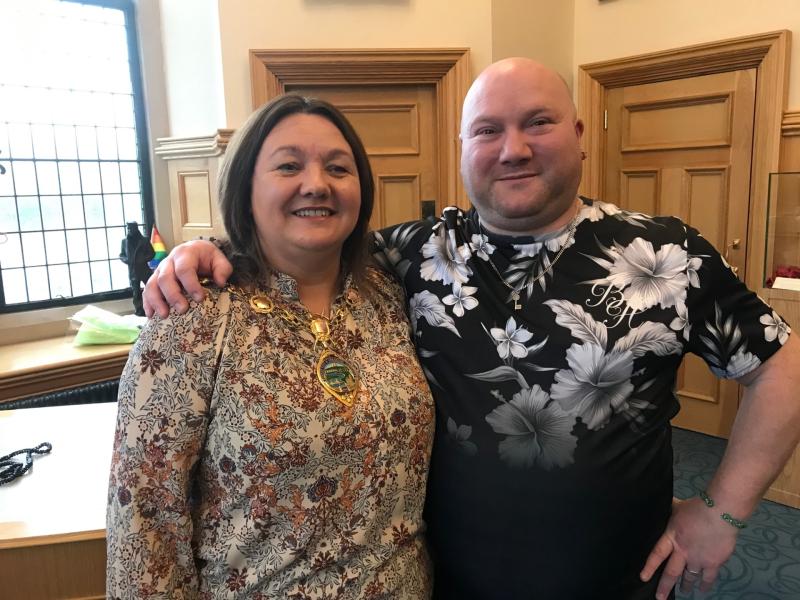 Jimmy Murray pictured with Mayor Michaela Boyle at the reception which was held in his honour in the Guildhall today.

A man attacked in Derry last month was today the guest of honour at a special reception in the city's Guildhall.

Jimmy Murray was set upon by a small group of youths at Foyle Street on January 14.

Video footage of the incident was captured by a passer-by.

The footage showed some of the youths kicking Jimmy's bike and trying to steal it.

Although Jimmy did not report the incident, there was a huge reaction to the online footage.

It later emerged that 44-year-old Jimmy is from Dunloy in County Antrim and regularly travels on the train to Derry with his bike before cycling around the city.

After the attack, a fundraising campaign was launched to raise money to fix Jimmy's bike.

This was enough to allow Jimmy to buy a new bike.

After hearing of Jimmy's plight, Councillor Michaela Boyle, the Mayor of Derry City and Strabane District Council, got in contact with Jimmy and invited him to come to the Guildhall.

Jimmy travelled back to Derry for today's reception with friends and members of his family.

Mayor Boyle said she was delighted to host Jimmy in the Guildhall and said she hoped the recent incident would not put him off returning to Derry.

However, speaking to Derry Now at the reception, Jimmy said nothing would deter him from visiting the city.

"I have been coming to Derry for a long time and I love it here. It would take a lot more than something like this to put me off," he said.