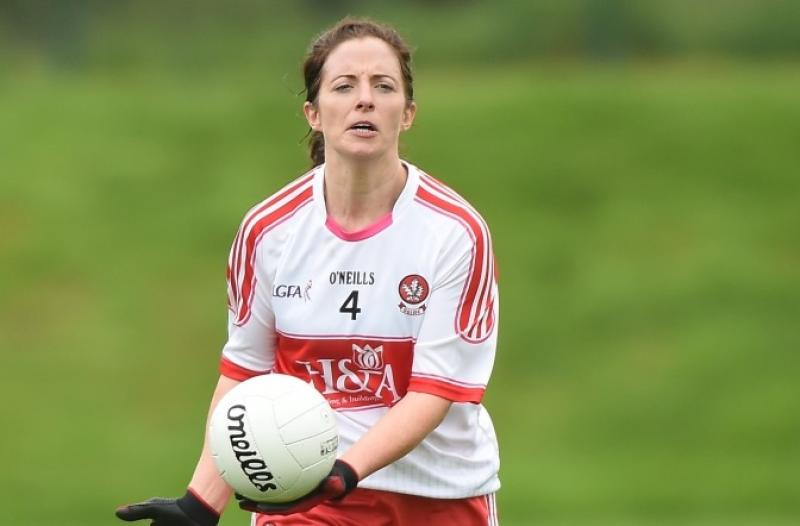 Cáit Glass in action for Derry against Louth in the championship. (Pic: Sportsfile)

Having worn the county colours of Tipperary, London and Derry, as well as the club shirts of Newcastle, Ballymacarbry, Tara Ladies and Ballinascreen, Cáit Glass has called time on her much travelled inter-county career.

The last five years were played in the red and white of Derry, the land of her husband Seán, a place she is happy to call home and a team she was proud to captain for the last three seasons.

But after ‘living on borrowed time’ for the last couple of years, Glass has decided that her time as a county player is over.

Club football is still part of the plan, and instead of turning towards coaching, she will envelope herself in behind the scenes work with the club committee and further education in health and well-being for younger players. And at the age of 33, she is thinking of taking up a new game.

“I am still training with the club so I’ll see how that goes. I’ve even thought about picking up a hurley to see if I still have any of those skills. I was never big into camogie, but I tried it on and off over the years,” said Glass, who works as a physiotherapist in Derry’s Altnagelvin Hospital.

“I’m already quite involved in the club committee. We are very lucky in Ballinascreen, we have men and women all in one club. Camogie, hurling, mens’ and women’s football is all under one roof.

“I am also about to start a leadership programme with the WGPA in a couple of weeks. I thought I would naturally fall into coaching but I wasn’t that excited about it. I was very passionate about helping younger girls through, but maybe more by inspiring them.

“Social media is such a big thing now compared to when I was that age, I don’t even know if I had a phone. We just went and played and it was so much fun. We got to a county final and I remember being really nervous, but I don’t remember there being such high pressure. It's so important for these girls to have a sense of identity, to know themselves and to know how to deal with all of those pressures.”

A native of the Tipperary village of Newcastle, which straddles the Waterford border and is in the same parish as Déise powerhouse Ballymacarbry, Glass played a couple of years inter-county football with Tipperary before she moved to England to study. She played underage football with her home club, before following parish rule and togging out with Ballymac for a few seasons.

Following a couple of years out of the game due to a lack of clubs in Brighton and then New Zealand, Glass eventually got back into her corner-back role after her move to Derry. It felt like home straight away.

“My husband got work in London but I got work in Derry and stayed with his family when I worked. I ended up joining the local football club in Ballinascreen. I even ended up playing county that year.

“Then I left and played in London for a couple of years. Joining a club is your go-to when you are a footballer. It really helps you settle; I don’t know what I would have done without football here and in London.”

It was no shock that Glass was quickly picked up by the London management, and when she returned home to Derry in 2015 county football was part of the plan there too.#

“We got married in 2015, so I said I’d play. Every year I felt it was a bonus, I didn’t intend to keep playing. Every year I always said this was going to be my last year. I’ll be 34 this year and five years ago there was no way I’d have thought I’d still be playing.”

Going into the 2017 season there were high hopes, but talk of not entering a county team for the season was met my derision in several quarters. The leadership of Paul Crozier rescued the game in Derry, and with Glass as captain they worked their way to the TG4 All-Ireland Junior Final.

“You start to dream: ‘I’m getting to play in Croke Park; this is the dream and we’ll do it’. We drew that with Fermanagh and lost the replay two weeks later. Going up and down the aisle on the bus on the way home we spoke about giving it another go.

“We all went back and Paul came back for 2018 and 2019. We won a first Ulster title in ten years and lost the semi-final by a point. I think losing the semi-final was worse that losing the All-Ireland. It felt like it was all going well, but then to lose it at the very end after playing so well hurt more for some reason.”

So 2020 will see new faces in red and white. Glass will be a keen supporter, and is excited by the next generation.

“I felt in my heart that I had tried my best, I knew I had done what I could. The management was moving on as well, and after creating a bond with them it was the natural time to finish up.

“You are part of a team and everyone feels that the team is depending on them. But I heard recently, that when you find it hard to say ‘no’, think of it as someone else having an opportunity to say ‘yes’. Thinking that way I knew it was my time to move on.

“A lot of younger players are coming in and playing for Derry is seen as something worth playing for again. The squads turning up underage are bigger and better than they’ve ever been. I don’t know if us playing in Croke Park had anything to do with it, but it’s possible.”