Christmas may be the most wonderful time of the year but for local charities such as La Dolce Vita Project, it is also the busiest 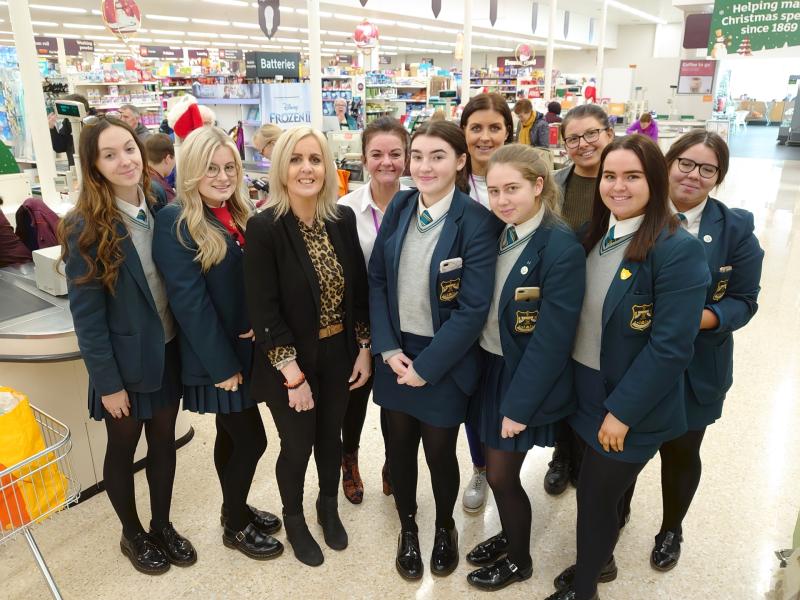 Donna-Marie Logue (centre) with La Dolce Vita Project volunteers and students from Thornhill College, pictured at a fundraising bag pack at Sainsbury’s at the weekend.

Christmas may be the most wonderful time of the year but for local charities such as La Dolce Vita Project, it is also the busiest as they attempt to bring happiness to families in the city affected by domestic abuse, violence, sexual violence and parental alienation.
The charity, based at 13 Queen Street, will celebrate its fourth anniversary on January 3 next year, and for Donna-Maria Logue and her team of committed volunteers, the service has become more necessary than ever as incidents of abuse and parental alienation continue to rise.
La Dolce Vita offers therapeutic intervention and support to those impacted by domestic abuse, violence, sexual violence and parental alienation, regardless of gender, but that is just the tip of the iceberg, as evidenced by the annual Christmas Appeal, which sees volunteers travel into the local community to collect donations which are then passed on to families in need at a time of year which can often be demanding financially.
“This year we have seen three times the amount of people needing support,” Donna-Maria explained. “There has been an overwhelming response of support from the public. Although there are people out there crying for help, the general public of the city of Derry and Strabane and Belfast have been unbelievable in what they have been providing for people who have been affected this Christmas. We’ve seen hampers being delivered, vouchers, toys, pyjamas, gift sets.
“On Thursday there we didn’t stop going out into the community to deliver but also to collect stuff.
“I’d like to give a particular shout out to Margaret Morrison in Shantallow, whose living room was actually filled with stuff that she had collected for La Dolce Vita Project, to go out specifically to families who have been affected by domestic abuse and to Church Street, Strabane for their wonderful donations again this year.
La Dolce Vita Project is run largely on donations from the public and, on Friday, supported by local students from Thornhill College, they took part in bag-packing at Sainsburys. These small events go a long way to ensuring the continuation of a commitment to help those struggling at home.
“Believe it or not the youngest person we have supported is a week old baby boy and the eldest that we have had to help is 76 years of age so that shows you the broad age range,” Donna-Maria continued.
“We are finding that it’s people from all communities, the working class to those on a lower income as well. It is sad to see but it is also fantastic that we are receiving public support to do this.
“We are a voluntary run organisation. We are solely run on fundraising. We are only two to three months ahead at any time so we want to thank the public for the support that they have given us coming up to four years. They have carried La Dolce Vita Project and they have supported over 500 people on a one to one basis through supporting us.
“We have been able to put 81 people through family intervention and support planning and indirectly we have had 876 children who have been supported.
“Even this Christmas, you are talking 119 children who have received a gift that have all been donated by members of the Derry City, Strabane community.”

Families struggling
Financial stain at this time of year has become a huge issue for families through the city and beyond and Donna-Maria explained that La Dolce Vita Project can and will do whatever it can to help, adding that public donations to the charity have already brought relief to so many.
“Every year we do it because we deal with people every week who are struggling and since Universal Credit has come in we have seen a peak on dependency of our services,” she stated.
“They are dependent on little to get them through that period but they have to but presents on top of it so we are trying to take that pressure off them by giving them something be it a voucher for the butchers or perishable items – everything helps.
“We have had someone drive to us from the country because she hasn’t been able to source any help from the rural district. We are seeing an epidemic, an absolute crisis which is affecting people far worse because not only are they having to deal with the financial pressure, and if they are are in domestic abuse environment, then thisis twice the pressure. They could be with a partner who gambles, or drinks, or who has damaged the gifts so they can’t get to buy anything or even a partner who holds all the money so if we can alleviate that pressure we will do so.”

Last minute appeal
La Dolce Vita Project will remain open this week and will accept donations up until Monday 23rd Dec 2019.
“The appeal this year has been so important and we still have families who are calling on us late on,” Donna-Maria explained.
“For them to ask for support takes a lot so we see it as ‘Wow, they are amazing, they have empowered themselves to do that’. They could be afraid to ask for help, thinking someone else might need it, but we look at it very differently because they are wanting to support their family.
“We all need a helping hand at times so it’s better to say than not to say. If anybody would like to support us we will be opened until 3pm on the 23rd Dec 2019, we’ll be collecting items right up until that day.”

“People can call to the office or if they would like to donate they can go through our website www.la-dolce-vita-project.com or through Paypal ladolcevita5277@gmail.com , so we can go out then and buy more items.”